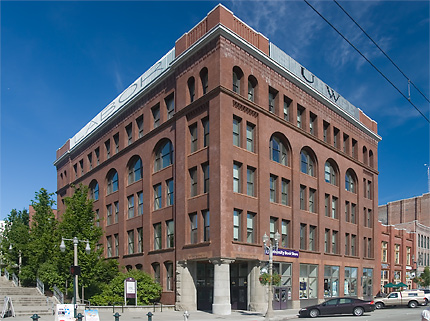 Office of the Chancellor – GWP 312

The coming of the Northern Pacific Railroad to Tacoma, the western terminus of the transcontinental line, brought a population explosion, rapid prosperity, and a building frenzy to the city. Tacoma’s population grew from about 1,000 in 1880 to more than 36,000 a decade later. In 1887, the city issued only 350 building permits. Just three years later, more than 1,700 buildings were permitted.

The optimism and excitement of the economic boom of the late 1880s and early 1900s is reflected in this building, designed by Frederick A. Saxton. Built in a Romanesque style with obsidian pressed brick and terra-cotta trim, the detailing is some of the best in the district. When it was new, a grand staircase offered views of Mount Rainier from the landings.

Because of the severely steep hillside, commercial buildings in the “jobbers” district tended to have multiple stories and were equipped with electric elevators. Their finely decorated storefronts faced Pacific Avenue, while their backs were plain and practical. Goods were delivered to the rear of the buildings on the second floor from the railroad spur that ran along Commerce Street.

Garretson Woodruff Pratt sold dry goods here, the only such store in the state at the time to deal exclusively in the wholesale trade. By 1892 the company’s customers spread from Washington to Oregon, Idaho and Alaska. But, like many successful businesses of its day, the company failed during the economic Panic of 1893.

Today, gray paving bricks in the walkway mark the railroad spur’s path. The covered walkway that runs along the back of this building and those adjoining it replicates the loading docks that once received raw goods and materials from the train cars. Moore Ruble Yudell of Santa Monica, California, with associated architects LMN Architects of Seattle, designed the 1995 renovation of these four connected buildings for the university.