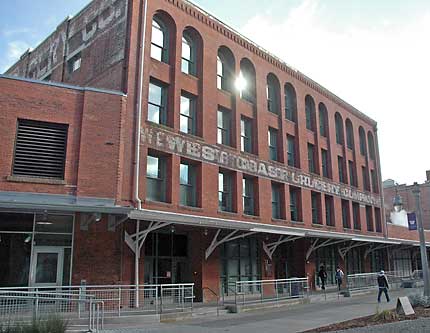 When the Northern Pacific Railroad chose Tacoma as the western terminus of its transcontinental line, it acquired the land along both sides of the railroad bed. To protect its investment and prevent land speculation, parcels were sold to commercial enterprises with certain strings attached. The buyers had to specify what the land would be used for and had to meet high standards of construction and maintenance. Wholesale businesses, or “jobbers,” were located here to make the most efficient use of the railroad spur.

When the Tacoma Grocery Company bought this lot in 1889, the contract specified that it must put up a brick building within one year, a typical requirement of the land company. Brick was specified because of the many devastating fires that had occurred that year, including the fire that burned Seattle to the ground.

The land company also insisted on high aesthetic standards for the public side of the building facing Pacific Avenue. Local architects Proctor and Dennis gave this building an Italian Renaissance style.

Tacoma Grocery’s founders intended to establish the largest wholesale grocery in the Pacific Northwest and put up this building to house its expanding business. Within five years the company supplied groceries from Montana to Alaska. But the economic Panic of 1893, followed by a severe nationwide depression, caused the company’s failure.

Architects Moore Ruble Yudell of Santa Monica, California, with LMN Architects of Seattle as the associated architectural firm, designed the renovation of these four connected buildings for the university.