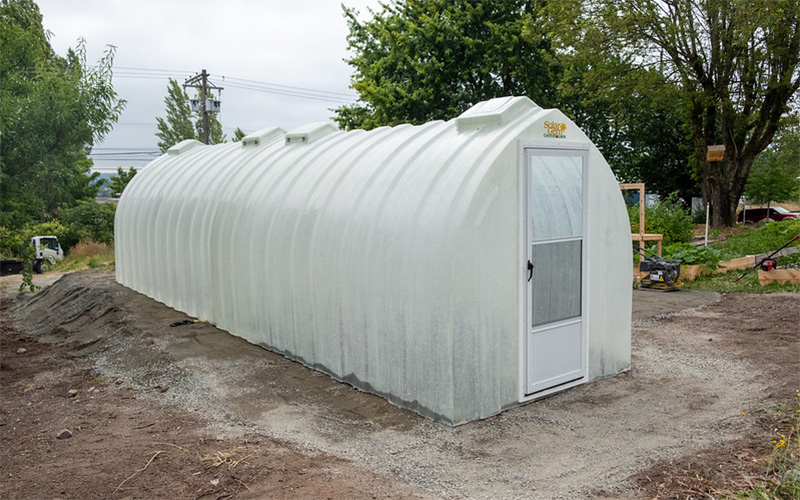 A House in the Garden

Last year the University of Washington Tacoma’s Giving Garden produced almost 400 pounds of fresh fruits and vegetables for students and members of the campus community. Ryan Moriarty, the staff sponsor of the UW Tacoma Giving Garden, hopes to double that number in the next couple years, thanks to the addition of a new greenhouse.

The idea for a greenhouse sprouted while Moriarty was taking a grant-writing class on campus a couple years back. He hoped by adding a greenhouse to the space on South 21st and Fawcett that the Giving Garden would be able to extend its growing season through the winter months, and add a revenue source to help sustain the garden in the future through plant sales. “This was a really instrumental piece of equipment that would let the garden do more plant sales or grow our own starts for use in the garden,” said Moriarty. With the help of UW Tacoma Associate Professor Jim Gawel, the Giving Garden’s faculty sponsor, the Giving Garden acquired a grant from the Strategic Initiative Fund the following year to get started. The eight-foot-tall, eight-foot-wide, thirty-foot-long greenhouse was finally installed this summer, two years after Moriarty first started working on the project.

The greenhouse will allow the Giving Garden to expand its services throughout the year. “Students are on campus through the coldest months and then go away during the summer, when we have the largest harvest,” said Moriarty. Being able to grow salad greens and different kinds of crops throughout the year means more healthy options for students.”

The greenhouse will also serve as an educational space that will allow students to conduct research on campus in a controlled environment. “You could have faculty come and hold their classes there,” said Moriarty. “We have the SHED (Sustainable Hub for Education and Demonstration), we have the garden, raised beds, fruit trees, a native plant walk, and this is just another tool that the garden could leverage to fulfill its mission.”

Moriarty and Gawel are now looking toward the future. Recently the Giving Garden team added twenty raised beds and eight fruit trees, as well as pollinator habitats designed and fabricated by students from Tacoma’s School of Industrial Design, Engineering and Art.. A new fence is also in the works. “The next project that we've been working on is getting a new irrigation system,” said Moriarty. Moriarty and Gawel hope to utilize sustainable materials and eco-friendly solar panels to power things like the irrigation pump. The Giving Garden has also added a paid Student Giving Garden Coordinator position and two student Giving Garden Assistant positions that run the garden as it continues to grow.

The Giving Garden at Age Ten

The Giving Garden Grows a SHED