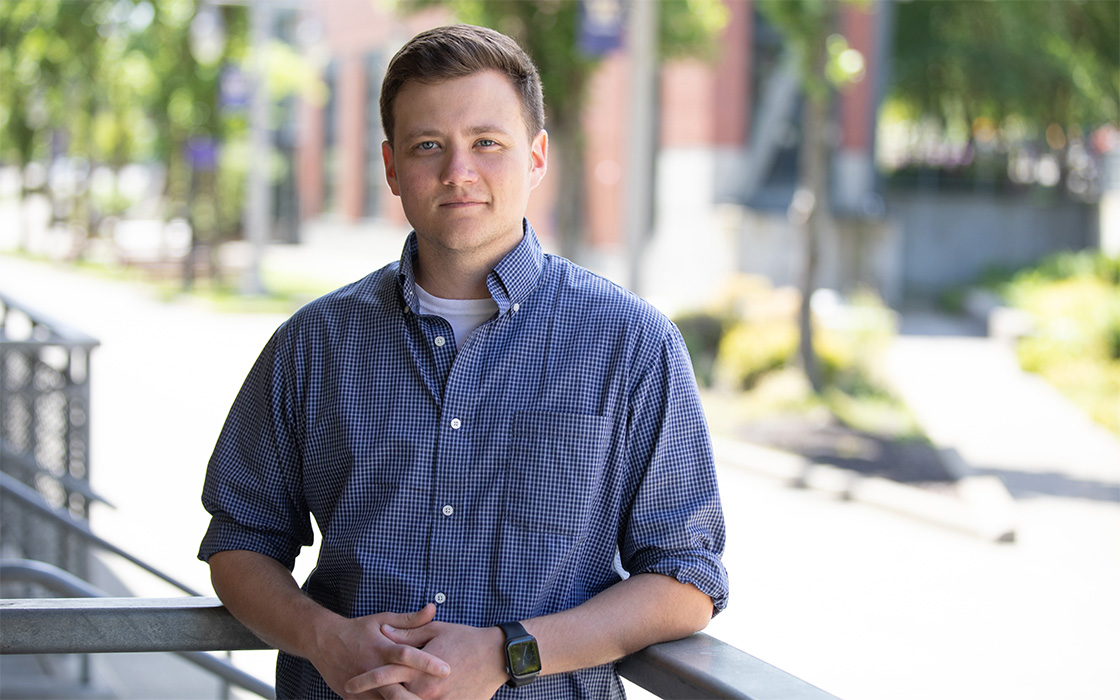 Years of exposure to Spanish-speaking cultures and a turn of duty with the U.S. Army have led Kendall Burch to his dream of becoming a medical doctor.

Kendall Burch is no stranger to travel. Growing up in a military family he has lived in Florida, Mississippi, Georgia, and Texas, just to name a few places.

In high school he took this nomadic lifestyle to a new level by joining a Rotary Youth Exchange program, living in Chile for a year, and taking his first glimpse at Latin American culture -- a glimpse that would ultimately shape his decision to study Spanish at UW Tacoma and graduate with a degree in Spanish Language & Cultures.

“I really learned to appreciate my own culture more and to think about my own values, and how they are different, or the same, as someone from somewhere else,” Burch said. “It was a really immersive experience and helped me get a really good base of the language.”

Although his time in Chile was a stepping stone to Burch’s academic commitment, it was his time serving with the U.S. Army, deployed in Central America as a civil affairs medic, that truly cemented his passion for the Spanish language and Spanish-speaking nations.

“Basically your job [as a civil affairs medic] is to be an interface between the civilian population and the military or the local government, or other legitimate organizations, to find out what their needs are,” Burch said.

Through his work as a medic for the military, Burch decided he would eventually pursue a career in medicine, either in the emergency room or as a pediatric doctor, using his education in Spanish to assist a more diverse pool of patients. He was accepted into UW Tacoma’s biomedical sciences program, having always wanted to live in the Pacific Northwest, initially planning on minoring in Spanish. However, he came to find that balancing school, work, and life while studying two fields was a bit too much and shifted his attention to Spanish.

Still not giving up on his dream of becoming a doctor, UW Tacoma is just the beginning for Burch’s academic dreams and he hopes to study for the Medical College Admission Test (MCAT) and apply to medical schools within the next couple years.

“Going into medicine, or really anything in the U.S., it’s so useful to speak Spanish,” Burch said. “I just think that in medicine being able to communicate effectively with my patients and make them feel comfortable -- I think it’s a good skill to have.”

While finishing up his degree at UW Tacoma, Burch has been active in serving his community both through his job as a Spanish teacher at the independent Seabury School, which is specifically designed for intellectually advanced children in Pre-K through 8th grade, and by sitting on the board of AidNW, assisting immigrants in detention facilities. AidNW is a mostly volunteer-led organization that visits detainees inside the Northwest ICE Processing Center (also known as the Northwest Detention Center) and helps them reach their loved ones all over the country.

“I’ve really enjoyed being able to contribute there. We’ve got some new projects that hopefully we’ll be working on soon, and it’s been a really positive experience,” Burch said.

Burch believes that broadening cultural education for kids is paramount to shaping future decision-making and interactions they have with the world, while forming a more sensitive, open-minded outlook on people with different experiences.

“I love my job honestly,” said Burch. Every day I go to work I’m excited to go. I’ve really enjoyed the opportunity to show them different perspectives from the Spanish-speaking world that a lot of times our education system doesn’t have a focus on.”

What he found, through his research, is that there are some pretty important negative effects with these missions both in terms of the quality of medical care as well as the sociopolitical impacts. Setting up a clinic, he said, often interferes with the government allocating resources, and changes people’s health-seeking behavior because the general public will typically wait to be seen if they know there is a free clinic available.

“During my time in Central America I saw a lot of frustrating things and, prior to that, in paramedic school, I felt a strong sense of responsibility to figure out what I could do help other people have more opportunities,” Burch said.