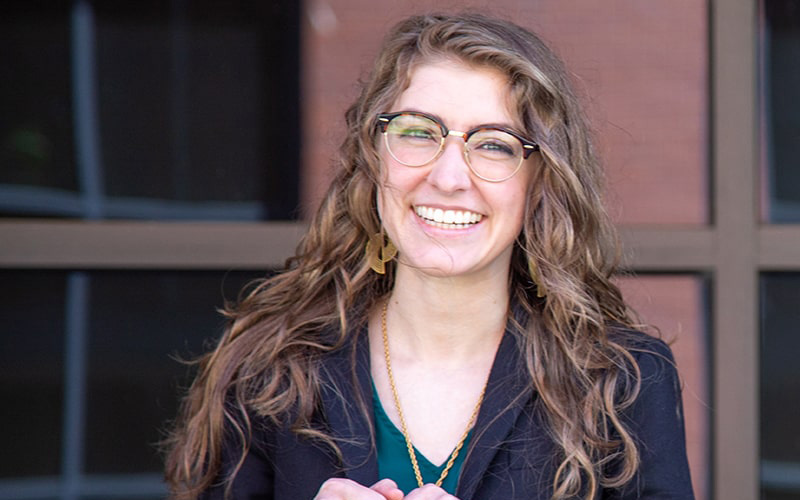 Senior Teresa Dennerlein grew up in isolation then got a chance to see the world before finding what she needed at UW Tacoma.

Teresa Dennerlein sits at a crude desk in the storage room of a South Carolina bar. It’s an impromptu break room for employees, an afterthought, as evidenced by the beer kegs taking up the remainder of the available space. The overhead light is weak and jaundiced. Dennerlein has to squint to make out the words in the economics textbook she’s reading.

Dennerlein isn’t a student. She’s the violinist for the Indie Folk band “The Last Bison.” The year is circa 2012, but the exact date doesn’t matter. There’s a three-year period in Dennerlein’s life where one could change the location — from a bar in South Carolina, to the back of a 15-person passenger van traveling some lonely back country road at midnight on its way to the next gig — and the space doesn’t matter, because no matter where her body was, Dennerlein’s mind was always somewhere else. That somewhere else was often a book.

Someone knocks on the storage room door.

Dennerlein doesn’t rush. She lingers with the text, finishes the paragraph before making note of the page number and closing the book.

Dennerlein grew up in Virginia, the youngest of three siblings. The family lived in an insular community whose members relied on each other or themselves for most things, including education. “I was homeschooled until middle school,” said Dennerlein. “After that I would go to a co-op two days a week and take some classes there. It was a very self-driven educational environment which meant I’d pick up a book and read it cover to cover.”

This model fed Dennerlein’s natural curiosity but didn’t provide everything she needed. Picture a plant that almost gets enough sunlight to thrive or a brand-new car that lacks a steering wheel. “I didn’t get a lot of feedback and there wasn’t the ability to dig deeper into a topic,” she said. Dennerlein’s outsized interest pushed up against the boundaries of the world she inhabited. She had questions but the answers were somewhere out “there” just beyond her reach. “I was isolated,” she said.

A lot of kids play a musical instrument, some because they are genuinely interested, and some because their parents insist. Dennerlein fits into the first camp. She started asking to play the violin at age four and kept at it for two years until her parents finally relented. “I used to practice for so long that my mom felt she had to encourage me to stop practicing and go outside,” she said. Of those kids who pick up an instrument, many end up putting them back down for one reason or another. Some continue and maybe even become professional musicians. This last scenario isn’t exactly rare, but neither is it the norm.

Dennerlein’s upbringing may have been limited in terms of access but this limitation did eventually provide a ticket to the world at large. A family she knew started a band and they needed a violinist. Dennerlein got the job and it didn’t take long for “The Last Bison” to attract attention from national record labels. “This was in the era when Mumford & Sons were really big,” she said.

The band signed with a label at the end of Dennerlein’s senior year in high school. “They flew us up to New York City and we stayed in this fancy hotel,” she said. “You have to remember that I had a parochial upbringing and I was just blown away by it all.”

Bison spent three years crisscrossing the United States, 11 people and all of their gear packed into a van. “It was not a glamorous life,” said Dennerlein. There were countless drive-thrus and rest stops, cramped necks and aching backs as the band motored from one show to the next. Even so, Bison found success. They graduated from performing in smaller venues for a handful of people to serving as the opening act in a packed-to-capacity amphitheater for major artists including Imagine Dragons.

The grind provided a literal window for Dennerlein. For the first time she got to see and experience other ways of being in the world — and she liked it. During this time Dennerlein also met the man who would eventually become her husband, this part is important, for without him, Dennerlein might have attended a different university.

Dennerlein enjoyed performing but that’s not what she wanted for her future. “We’d play at college shows and I would have students come up to me and say something like ‘this is my dream,’ and I would tell them they were living my dream,” she said.

Dennerlein’s husband served in the army. In 2015 he received transfer orders to Joint Base Lewis-McChord. “I decided the time was right,” she said. “I left the band and enrolled at UW Tacoma.”

Growing up is a tricky thing, especially when you don’t have the thing(s) you need. Over time that need can metastasize into doubt, a living thing that grows within a person and can eventually take over. Dennerlein came to campus unsure of herself. “I came in feeling that I needed to present myself as ‘normal’ and educated which was how I made up for my insecurities,” she said. “At some point I realized that I wasn’t alone in this and that so many students at UW Tacoma worked really hard just to make it to school while dealing with external pressures and lack of opportunities.”

The UW Tacoma community, especially faculty, became a kind of cheerleader for Dennerlein. They were there to drown out her inner voice when it became too much. “I think every quarter I can look to a particular professor who encouraged me, who told me things like ‘you are capable’ or ‘you are smart’ or ‘you belong in academia,’” she said.

Dennerlein chose to major in Politics, Philosophy and Economics, partly because she has long been interested in politics but also because of something that happened in 2016. Dennerlein left school because it looked like her husband was going to be reassigned to a base on the East Coast. Around the same time, then-President Donald Trump sent out a number of tweets directed at North Korean leader Kim Jong-Un in which the former implied military action against the latter. The army responded by sending units to South Korea. Dennerlein’s husband belonged to one of those units. The move to the East Coast was off. “This is a moment where I realized just how much policy can impact everyday life,” said Dennerlein.

Dennerlein thrived upon her return to campus. She received the Washington Policy Center’s Jennifer-Dunn Thompson Scholarship. Dennerlein is also a Dressel Scholar, an honor that provides more than one type of assistance. “I was assigned three mentors,” she said. “They truly affected my life because I didn’t have mentors growing up who could speak to me about being an attorney or a community leader which is what I aspire to be and now I had people I could turn to for advice and insight.”

It’s amazing what a little encouragement can do for one’s confidence. Doors that were once shut were now open and seemingly lined up in a way where one opening led to another. Dennerlein got involved with Legal Pathways and in the summer of 2020 received an internship through the Public Interest Policy and Advocacy Program and was placed as a policy intern with then-State Senator Steve O’Ban. A few months later Dennerlein received word she had been accepted into the Legislative Internship Program through the Washington State Legislature. “The support system at UWT and my professors made the difference for me,” she said. “I didn’t have connections but I had them and I felt that made up for that gap in opportunity.”

Dennerlein graduates in June. She has worked as a paralegal for a few years and plans to stay in this role for another year. After that, it’s law school and a long-term goal of working for the Department of Labor.

Dennerlein’s interest in this field stems from a course in labor and community organizing she took with Associate Professor Charles Williams. This class served as a stepping stone Dennerlein used to get involved with the Labor Solidarity Project. She got a chance to work with Lecturer Anna Lovász and Assistant Professor Zaher Kmail on their research regarding inequalities in the Pierce County labor market.  “From a structural standpoint you need people on the inside and the outside to push for change,” she said. “I think it’s harder to see reform if we are only ever putting pressure on institutions from the outside and you don’t have people that are doing the work in the institutions themselves.”

Teresa Dennerlein is used to the stage. She’s performed on lots of them over the years. In a perfect world this story would end with Dennerlein walking across the stage at the Tacoma Dome. Voilà! Symmetrical symbolism, the perfect vehicle to show transformation.

The pomp and circumstance that comes with an in-person Commencement would be nice, even uplifting. Still, what really matters is that Teresa Dennerlein did it. That’s the tangible memory, the thing she can hang on her wall next to her soon-to-be-achieved law degree above a desk in her new office where the only bar is the one she passed.

A Good Place to Grow

Kirsten Hargett chose to study biomedical sciences because she wanted to stretch herself.