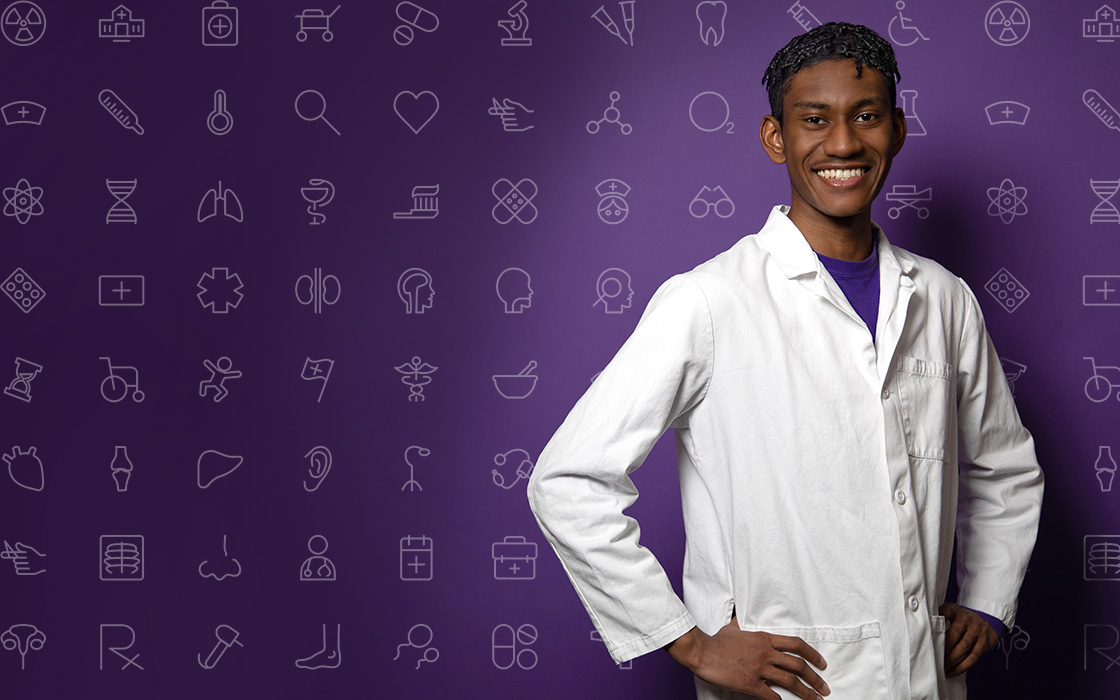 Christian “CJ” James is going to be a doctor. “My ultimate goal is to become a physician specializing in family medicine,” he said. The UW Tacoma junior is currently working on a biomedical sciences degree. “Most of the required courses for med school are offered in biomedical sciences,” he said.

James transferred to UW Tacoma from Pierce College where he completed an associate’s degree in biology through the Running Start program. The decision to come to campus is personal for James. His brother graduated from UW Tacoma with a degree in computer science. James, who lives in Spanaway with his parents, wanted to stay close to help his father. “My dad needs a lot of attention medically, my brother moved out for work and my mom works all day to financially support our family, so I wanted to be there for him if he needs anything,” said James.

The budding M.D.’s interest in the field stems from his love of science. “I’ve always been curious about the world,” he said. “I’ve always asked why, it’s just part of who I am to want to learn more and science is how I’ve fulfilled that thirst for knowledge.”

Then there’s the sibling rivalry, which is less a rivalry and more a playful back-and-forth between brothers. “My brother works at a tech company and he’s always telling me computer science is the future and that I should switch majors,” said Christian James. “It’s weird, because he’s always been a mentor to me, but he’s also kind of a rival who pushes me to go further.”

Despite his brother’s best attempts, James is still intent on pursuing his degree in biomedical sciences. In fact, he is busy gaining experience in the medical field. “I’ve been volunteering at MultiCare Allenmore Hospital in Tacoma for about a year,” he said. “I work in what is essentially a post-operative care unit. I act as an intermediary between nurses and patients.”

On campus, James is working in Associate Professor John Finke’s lab. “The lab takes what you learn in the classroom to a whole different level,” said James. “There is so much troubleshooting and things that can go wrong, it’s not as smooth as the science we learn in class.”

James is also a Dressel Scholar. The program “recognizes and rewards exceptional scholarly achievement, community engagement, and leadership potential for any student enrolled at UW Tacoma.” As part of the program, recipients are assigned a team of mentors.

James was partnered with Sophia Pino and Patrick Miles. Pino is a UW Tacoma alumna and currently works as the assistant director of admissions at American University of the Caribbean. Miles works for the Washington State Health Care Authority and has taught at UW Tacoma as a part-time lecturer. “I’ve learned a lot from them,” said James. “Sophia does medical school admissions and knows what will be looked at on my way into med school and Patrick knows the ins and outs of the for-profit healthcare system which will help me on my way out of med school.”

Medical school is still a few years away, but James has already started saving. He has been awarded multiple scholarships including the Lori Lynn Furlong Distinguished Endowed Undergraduate Scholarship. “I’ve been using some of these funds to pay for things like books and supplies, but I’m also saving some of it to help pay for medical school which will help reduce the burden down the line,” said James.

For now, James is focused on his courses and on connecting with the UW Tacoma community. He is currently the vice president of the Black Student Union (BSU). James and other members of BSU have been busy as of late organizing the annual MLK Unity Breakfast which takes place on Monday, January 16. Besides the BSU, James is also vice-president of the Pre-Medical Club, a student organization. “I love the community here,” said James. “The smaller class sizes make it easy to get to know your professors and your classmates.”

James graduates from UW Tacoma in the spring of 2024. After that, he hopes to attend medical school at UW in Seattle. “My long-term goal is to start my own thing,” he said. “I’d like to have my own practice that would allow me to provide care to underrepresented communities. I wouldn’t make a lot of money that way, but I just want to be there to help."