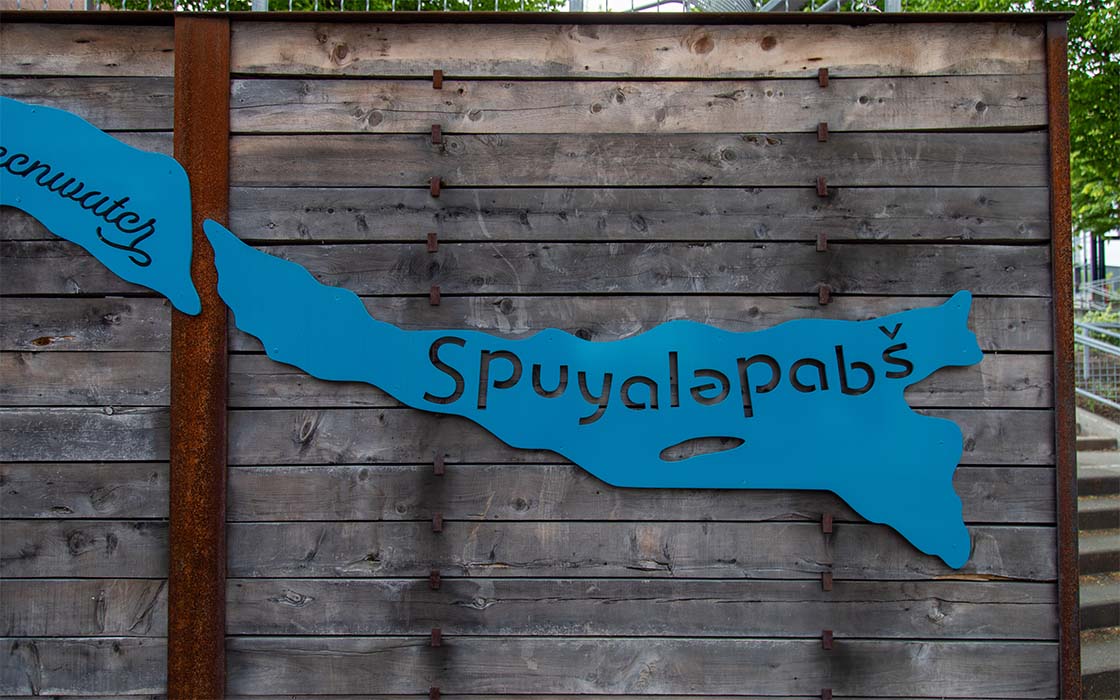 Rivers Run Through It

A new, permanent public art work, entitled “All the Rivers in the World,” stretches more than 250 feet through the UW Tacoma campus along the Prairie Line Trail.

UW Tacoma is home to a new permanent public art installation, called “All the Rivers in the World,” by artist Vaughn Bell.

The work stretches along more than 250 feet of retaining wall along the Prairie Line Trail, which bisects campus along the historic route of the Northern Pacific Railway, the transcontinental railroad that selected Tacoma as its west coast terminus in 1873.

“All the Rivers in the World”

Before the railroad cut the “prairie line” across this stretch of land, other lines coursed this way: the paths of creeks, streams and rivers leading to Puget Sound, footpaths and game trails. The Puyallup River, our local river, is the original line and continues as life-line. Its name is also the name of the original people of this place.

“All the Rivers in the World, Tacoma” is a public art project that reflects on the Puyallup river as life line and connector. It also emerges from the current life of Tacoma and the University: as a cosmopolitan place, home to many immigrants, people from all over the world. This idea has a precedent even before this site was a university. According to the historic assessment of the Prairie Line Trail, “More than half of Tacoma’s residents were immigrants by the early 1900s.” (p. 34) These immigrants came from all over the world and many worked in the buildings that now house the university. Now, students, faculty and staff continue to come from many places to be part of this community.

Members of the UWT community were invited to participate in this public art piece with the following prompt:

Think about rivers: the rivers you know, remember, and are connected to. Where has the water flowed in the places of your childhood and your current home? What is the name of your river? Write it in the language most meaningful to you.

All of the river names included in the piece were given to the artwork by members of this community. The placement of the river names in the sculptural form is done to create a feeling of flow. The names are placed roughly geographically, with the river names that are in closer geographical proximity to Tacoma being near the ‘mouth’ of the river and the river names from further away extending upstream. The exception is the ‘headwaters’ which include the Lushootseed for Tahoma. This creates a metaphorical “full circle” aspect to the piece, and references the circular flow of water on earth.

The design of the river form itself is based on the shapes of real rivers. The resulting shapes reflect actual shapes of some of the rivers named in the piece. This hybrid river combines many river forms and shapes.

Over a series of clement days beginning on July 8, 2019, UW Tacoma Facilities Services specialists Joseph Bor and Frank Bissen joined artist Vaughn Bell to install the 33 aluminum panels of “All the Rivers in the World.”

Below are two of many submissions created by members of the UW Tacoma community when prompted to name their rivers. At the bottom is a conceptual sketch of the artwork.