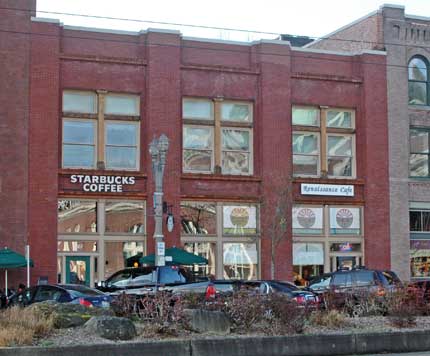 Note: Birmingham Block has no exterior entrance. You must enter BB through the main hallway in GWP or WCG.

During the economic boom of the late 1880s and early 1890s, a new type of business emerged in Tacoma — wholesale suppliers, or “jobbers.” The jobber district was primarily located between 17th and 25th Streets along Pacific Avenue.

A railroad spur ran along the back of the properties on what is now known as Commerce Street, where raw goods and materials were loaded directly into the buildings’ second-floor loading docks.

William Birmingham built this two-story “block” adjacent to the wood-frame building that housed his wholesale grain business — just as a severe economic depression hit the nation. Birmingham leased the building to a furniture company for three years before moving his own business into part of it. In 1938, S. Lavroff, a cigar dealer who had been a tenant since 1922, bought the building for his wholesale tobacco company. The firm changed names in 1953 to the Service Tobacco Company and operated there for many years.

This building and the others restored for the University of Washington Tacoma are part of the Union Depot District placed on the National Register of Historic Places in 1980. They were left relatively intact a century after their construction for two primary reasons: the high quality of craftsmanship that went into their design and construction and the advent of the automobile.

In 1906, only a few cars were seen around Tacoma, considered expensive toys and a nuisance to pedestrians and horse-drawn vehicles. But by 1912, cars and trucks were an integral part of doing business, and the city began to expand away from the railroad. The use of automobiles for commerce and individual transportation was a significant factor in business sectors moving away from this area.

By the 1980s the buildings were largely abandoned and most were badly in need of repair before the University of Washington bought and renovated them. Architects Moore Ruble Yudell of Santa Monica, California, with assistance from LMN Architects of Seattle, designed the 1995 renovation of these four connected buildings for the university.