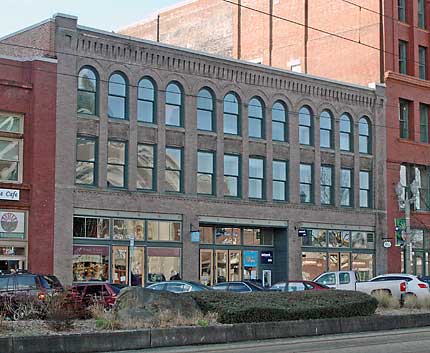 Note: Birmingham Hay & Seed can only be entered on the Commerce Street side or through the main hallway in GWP or WCG. There is no Pacific Avenue entrance for this building.

Tacoma was one of the leading port cities of the Pacific Northwest in the late 1880s. In just one month, February 1889, Tacoma shipped 1.5 million bushels of wheat, one of its main exports. With so much wheat moving in and out of Tacoma, it is little wonder that William Birmingham’s grain business needed more space. After building the Birmingham Block next door 10 years earlier, he tore down the wooden warehouse that originally stood at this spot and commissioned architects Proctor and Farrell to design a new brick warehouse. The three-story brick building cost $15,000 and was used to store flour, grain and baled hay.

In 1917, West Coast Grocery, which owned the building on the north side, acquired this building and for 30 years used it as warehouse space for its wholesale grocery business. After that, several auto parts stores were located here before S. Lavroff, a wholesale tobacco firm, bought it. Later known as Service Tobacco, the company also acquired the Birmingham Block next door.

When the University of Washington Tacoma bought these mill construction buildings and renovated them, the primary architectural firm, Moore Ruble Yudell of Santa Monica, California, with assistance from LMN Architects of Seattle, left many of the architectural features intact and reused some of the building’s original material to create interior stairs and details. The four buildings—West Coast Grocery, Birmingham Hay & Seed, Birmingham Block, and Garretson Woodruff Pratt—are joined together so seamlessly that many people don’t realize they are actually separate buildings.