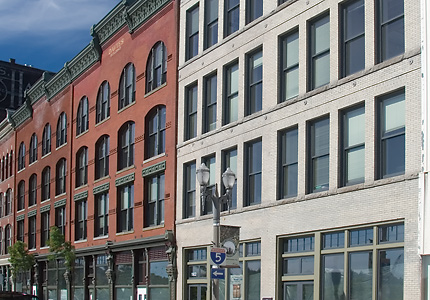 Many of the large brick buildings in this district were designed by prominent architects and built by craftsmen. The Cherry Parkes Building, named for the company that manufactured decorative cast-iron ornamental facades, features arched windows, fine brick and ornamental ironwork — a quintessential example of “railroad blocks” of the era.

Reese, Crandall & Redman, a leading wholesale grocer in the Pacific Northwest, built the southern structure in 1890-91, but the company went out of business during the devastating depression of the mid-1890s. A series of wholesale businesses used the building, until 1915, when Younglove Grocery expanded its business into the building and occupied it until 1935. Among the companies that later used the building was European Antiques, which opened here in 1978.

In the middle structure, built in 1890, John Campbell & Company imported and sold coffee, tea and spices. Operating as the Anchor Coffee and Spice Mill in a fireproof room, the company ground 1,500 pounds of coffee, made 2,000 pounds of baking powder, and produced 600 cans and 500 bottles of spices and extracts a day. In 1899 the company moved to another plant.

The Wiegel Candy Company, built in 1904, is now the northern part of the Cherry Parkes Building. The firm made and sold candy here until 1937. The building was later used by other candy companies, as a warehouse for Sears Roebuck, and finally as storage for a plumbing company and for a tire company that was located at the bottom of what is now the Snoqualmie Hillclimb.