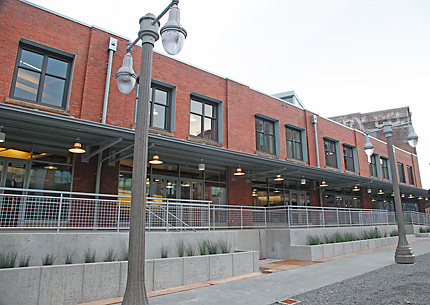 Local realtor and developer Russell T. Joy bought 200 feet of property on Pacific Avenue and hired the prominent architects Pickles & Sutton to design this large brick, “flatiron” building with eight storefronts. Newspaper accounts at the time stated that the building was — as near as possible — fireproof. But the wooden interior and contents of several tenants’ storage space was destroyed by fire in 1903 as firemen from four stations battled the fire with all the most modern equipment.

They managed to keep the blaze from spreading to the adjacent West Coast Grocery building, but were unable to save the inventory and equipment of four tenants, the Wiegel and Stardiamond candy companies, H.N. Richmond Paper, and the Great Western Stove Company. A few months later, architects Russell and Babcock designed renovations to the building to improve and strengthen it for heavy machinery. Four elevators were added, as well as a third story.

Over the years, the building has housed a glove manufacturer, a seed store, a coffee company, a machinery distributor, and a dealer in industrial and logging supplies. Several automobile dealerships were located here early in the 20th century, including the Oldsmobile agency and West Coast Motor Company, which sold Empire and Elcar models.

Several artifacts from the building were salvaged and re-installed as reminders of the building’s past. At the top of the main stairwell visitors will notice the hoist used to lift heavy loads to the top floors. Two metal fire doors were also restored.

Remodeling of the building for the University of Washington Tacoma was designed by THA Architects.