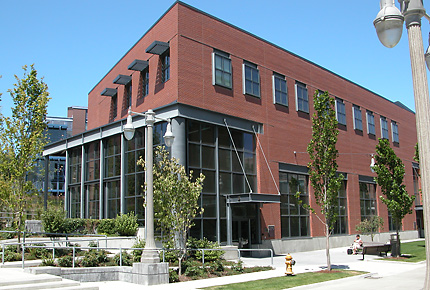 The Union Meat Company operated a wholesale meat distribution firm on this lot from 1911 until 1918. The building was taken over by Swift Company, a grocery and meat retailer and wholesaler, which used it until 1949. When the University of Washington Tacoma campus was planned, nothing stood on this site.

The Keystone and Science Buildings were the first new-construction buildings erected on the UW Tacoma campus. A skybridge joins the two buildings, spanning the original terminus of the transcontinental railroad line. When the buildings were constructed, the line brought daily trains through what is now the university campus. The line was deactivated in 2003.

LMN Architects of Seattle, the building designer, received an Award of Merit from the Seattle chapter of the American Institute of Architects for this triangular-shaped “keystone” building. Surrounded by historic buildings, the Keystone Building is faced with brick to blend with its older neighbors.