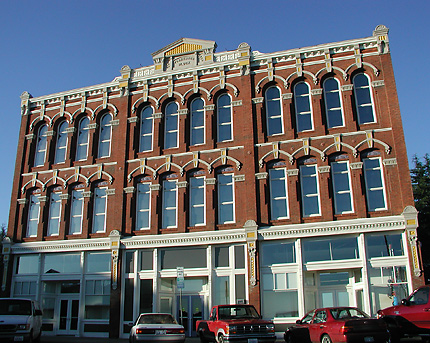 The Pinkerton is the oldest building on any UW campus. In 1883 the Northern Pacific Railroad built a temporary wooden depot at 17th Street and Pacific Avenue. Hotels quickly sprouted up nearby to serve passengers arriving in Tacoma. Across the street from the station was the Massasoit Hotel, a wooden structure built in 1887 by pioneer adventurer and investor Colonel John Pinkerton. Two years later he commissioned the prominent local architectural firm of Proctor and Dennis (who also designed the Pierce County Courthouse and the University of Puget Sound) to plan a three-story brick addition to the Massasoit Hotel, which boasted it was “the best family hotel in town.”

A fine example of railroad hotels of the era, the Italianate-style Pinkerton addition was built of brick and ornamented with cast-iron detailing in the facade. An elegant, two-story lobby and grand staircase greeted visitors, who could stay in one of the 40 “electrified” rooms for 50 cents a night. The bottom floor, with a separate entrance on Broadway, housed several businesses catering to the needs of passengers, including tobacco shops, a barbershop and a bath.

Three years after the Pinkerton was constructed, however, the railroad moved the depot two blocks farther south on Pacific Avenue, causing a change in clientele. Long-term residents replaced traveling guests, and wholesale businesses occupied the first floor. In the 1920s, the companies housed in the Pinkerton sold heating and refrigerator supplies, cash registers and office supplies.

The old wooden Massasoit Hotel was destroyed by fire in 1934, leaving the Pinkerton, which gradually fell into disuse. The hotel was boarded up and badly deteriorated when a fire gutted the interior and collapsed the rear wall in 1981. A year later, the accounting firm Moss Adams bought the Pinkerton for office space and restored it. The university acquired the building in 2001 and completed further renovations, including rewiring for modern technology. Architect Jim Merritt of Tacoma designed the final renovations.