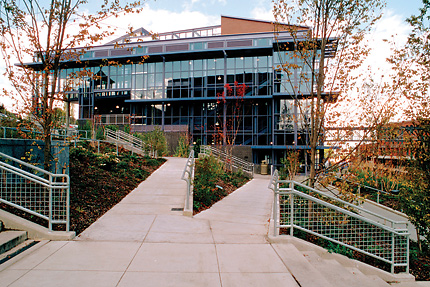 In the late 1880s several residences, including a lodging house, were built on this site, but were torn down some time afterward. In 1949 a two-story reinforced concrete building erected here housed a motor parts store and an oil filter service company. It was demolished before construction of the Science Building.

The first of two new-construction projects on the UW Tacoma campus, the Science Building was designed by Moore Ruble Yudell of Santa Monica, California, and LMN Architects of Seattle to blend in with the nearby historic brick buildings. A skybridge links the Science and Keystone buildings above Hood Street, where the original railroad terminus that linked Tacoma to the transcontinental railroad once brought trains through what is now the campus. The rail line was discontinued in 2003, when the Link Light Rail line was constructed on Pacific Avenue.