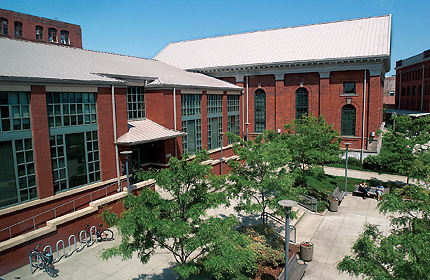 Harnessing the power of the 270-foot Snoqualmie Falls, the Pacific Northwest’s first hydroelectric plant began producing electricity for Tacoma and Seattle in 1899. This building, erected a few years later, housed the giant transformers needed to reduce the voltage coming directly from the plant. The Snoqualmie Falls Power House supplied electricity to most of Tacoma, including the 600 volts needed for the electric trolleys.

Contractor Charles A. Sayre built this neoclassical brick structure. The building sits kitty-cornered to the buildings surrounding it. Unlike the other historic buildings in this district, it is oriented toward the railroad tracks on the west side of the building.

The power house continued in service until 1958, when it was converted into warehouse space. It was left unused for many years until the University of Washington Tacoma renovated it, built an addition, and transformed it into the university’s library. Some of the infrastructure used to move heavy equipment still stands in the building.