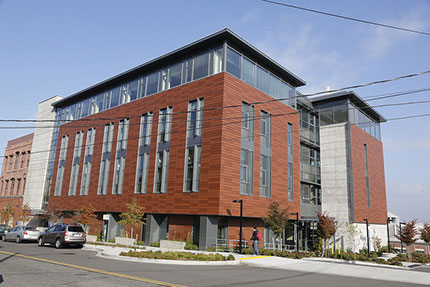 TLB 307C — Center for the Study of Community and Society

The original Tioga Building is the most significant — and only enduring — structure on this side of the block. Built in 1890 for the Richmond-Stoppenbach Paper Company and designed by Roth & Co., the three-story brick building resembles many of its original neighbors in both style and purpose.

The building’s tenants have been primarily wholesalers and manufacturers of everything from brooms to overalls to machine parts. The most famous occupant was Jet Equipment & Tools, a manufacturer of woodworking and metalworking tools. Jet opened in 1958 and quickly grew to occupy the entire building, another next door and a large warehouse across 21st Street. At one time, it was one of the 100 largest companies in the state.

Jet extensively remodeled the building’s interior in the late 1970s to convert it to offices and also rebuilt the first floor facade. In 1988, Jet was acquired by a Swiss company who moved its operations to Tennessee.

The site of the Tioga Library Building was originally a feed and grain warehouse, similar in size to the Tioga, that burned down in 1933. A one-story cement-block manufacturing building was constructed on the site in 1952. That building was demolished for the new construction.

The Tioga Library Building is connected to the Snoqualmie Building — the UW Tacoma Library’s original home — by a skybridge over the Prairie Line railroad tracks that once served these warehouses.

The Tioga Library Building was designed by THA Architects