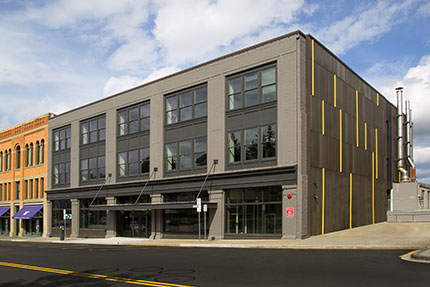 The name of the Tacoma Paper & Stationery building recognizes the company that occupied the building from 1911 to 1953, but the structure was erected in 1904 by the Tacoma Biscuit & Candy Company, known regionally for products such as “Snowflake Crackers” and “Everybody’s Quality Marshmallows.” The building was designed by Isaac Jay Knapp, who also designed the W.W. Seymour Conservatory in Tacoma’s Wright Park and who had flourishing architectural practices in Muskegon, Michigan, and Milwaukee, Wisconsin, prior to moving west to Tacoma.

The building was constructed to meet the special needs of a cracker baker/candy formulator, and was called the “best cracker plant upon the Pacific coast” when it opened. The ground floor featured loading-dock access to the Northern Pacific Railway (now the Prairie Line Trail). The second floor, with the company offices and a sales room, featured fine woodwork and Chicago-style plate glass windows along Jefferson Avenue.

The fourth floor had a waterproof cement floor specially designed so that it could be hosed down, draining food waste directly out of the building, said to be “the only candy floor of the kind in the West.”

The candy company moved out after only a few years, and the building was then occupied by Tacoma Paper & Stationery, a subsidiary of San Francisco-headquartered wholesale paper and office supply distributor Blake, Moffitt & Towne, which remained on the premises until 1953.