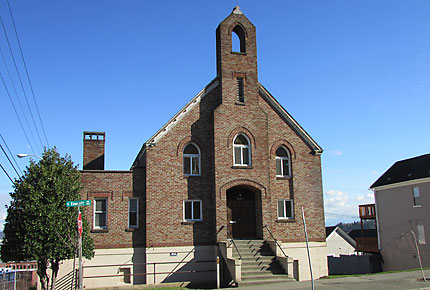 Situated in the heart of a bustling Japanese American community in this urban neighborhood, the Japanese Methodist Episcopal Church was founded in 1907 by the region’s Japanese immigrants. Services were held in local homes until the congregation built this church in 1929. The church was an important spiritual center, social hub, and place to learn English.

Designed by prominent local architect George W. Bullard, the interior had a 240-seat auditorium for services, but also women’s parlors, classrooms and even a gymnasium in the basement. Bullard is also known for designing several other area churches, the Hunt & Mottet Hardware building, and the old Washington Historical Society in the Stadium District.

From the very beginning, public schoolteacher Nettie Whitney was a friend and champion of the church — volunteering to teach English, helping secure the funds to build this church as the congregation’s first steady location, and fundraising whenever needed.

Whitney was also integral during the church’s most difficult time, the Japanese internment during World War II. From 1942 to 1945, the church closed its doors as its congregation was sent to internment camps. Many left their belongings at the church for safekeeping. During this time, friends of the church watched over the property, including Whitney. The church reopened in 1946, but most families didn’t return to the area and the church essentially had to start over.

In 1963, after Whitney’s death, the church was renamed in her honor.

The congregation sold the property to the University in 1999 and relocated to join other local congregations, primarily Puyallup United Methodist Church. The space is currently used as an instructional and work space.