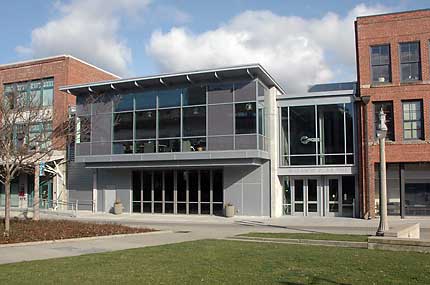 William W. Philip Hall, designed by Thomas Hacker Architects, is the third building to stand on this site.

The first was an 1886 structure owned by the Standard Oil Co. and built by the contractors Dougan and Bringham. The 1886 building was later demolished and replaced by a 1963 structure that began its life at 1914 Pacific Avenue as an American Plumbing Supply warehouse.

When the UW Tacoma permanent campus opened, in 1997, the top floor of that building, open to the campus plaza, became known as the Dawg Shed. For the next ten years the Shed hosted everything from charity balls to pick-up basketball games. In 2007 the Shed came down to make way for Philip Hall.

Thanks to a gift from philanthropist and businessman James A. Milgard, this building is named in honor of William W. Philip, a community leader and businessman, who had a seminal role in establishing UW Tacoma.