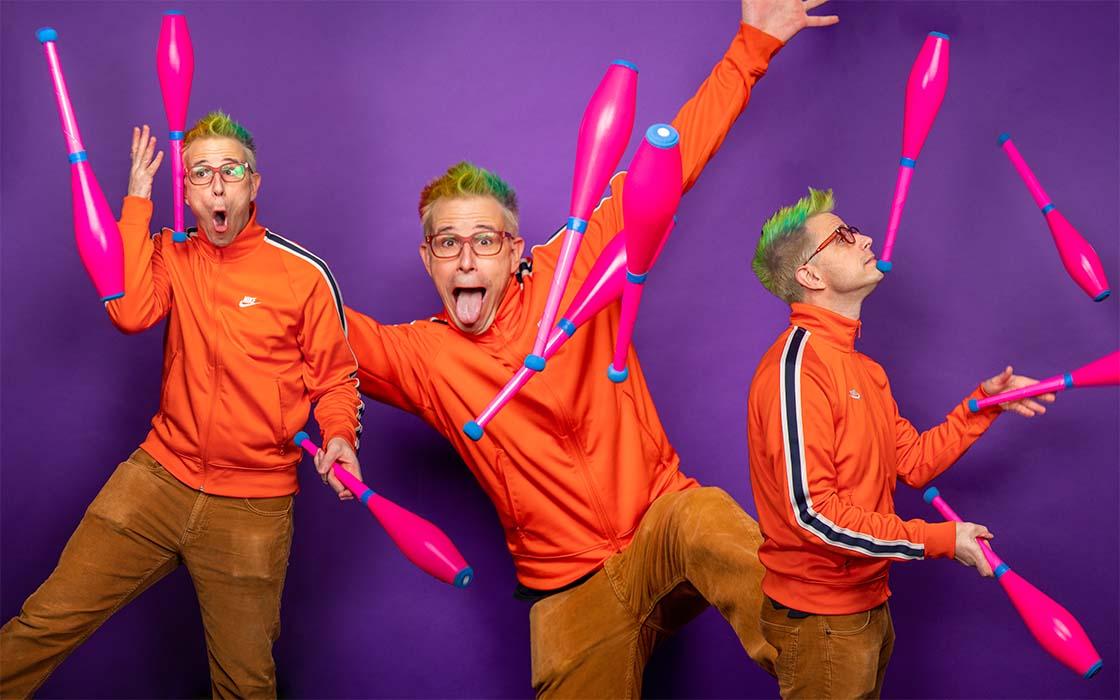 UW Tacoma senior Alex Zerbe's life is up in the air as he balances the demands of performing, raising a family and going to school.

Alex Zerbe is juggling a lot these days. The UW Tacoma senior is a professional entertainer and juggling is part of his act. Zerbe has spent the past twenty years tossing clubs into the air in a choreographed sequence that requires near perfect timing. The result looks effortless but making it appear this way is the result of practice, lots of practice.;

The pandemic forced Zerbe to retool his act. Live, in-person shows were no longer an option as governments around the world implemented lockdowns in an effort to slow the spread of the virus. “I started doing virtual shows,” said Zerbe. “I also started thinking about other careers.”

Zerbe had tossed around the idea of becoming a teacher. He completed an associate’s degree from Seattle Central College in the early 2000s but decided to become a performer instead of continuing in higher education. “It’s such a good gig,” he said. “You’re your own boss and you’re only limited by your own desire to work and be creative.”

Zerbe’s love for his craft is still strong, but, as he puts it, “My show is really physical, and I’m not as young as I used to be.” So, about a year ago Zerbe decided enroll at UW Tacoma. He started taking classes with the goal of earning a degree in history. “I live in Olympia and didn’t want to have to travel too far,” he said. “Tacoma’s cool, I like Tacoma.”

Zerbe seems to have mastered college class juggling: he has been on the Dean's List every quarter he has attended so far, with a near-perfect GPA.

arrow_back_ios
arrow_forward_ios
Alex Zerbe's Zaniac persona is ubiquitous via a Google image search. In this photo, he has dialed it down a bit, proving that there is more to him than zaniness. But the Zaniac comes on strong in the next few images.

arrow_back_ios
arrow_forward_ios
Zerbe was named Seattle's Funniest Prop Comic and Seattle's third-best air guitarist. Besides performing and taking classes at UW Tacoma, he does a lot of normal things like taking his kids to soccer games.

arrow_back_ios
arrow_forward_ios
In a study guide for those booking his school assembly show, Zerbe delves into technical details of his act, including how he teaches kids to beatbox, to balance objects, to write a rap song, and how his act connects to K-8 curricula.

Zerbe grew up in the Seattle area. His father, Richard Zerbe, actually taught in UW's Daniel J. Evans School of Public Policy & Governance for a number of years. “I was not a good student,” said Alex Zerbe. “I just didn’t care.”

The teenage Zerbe’s real passion was footbag, also known as Hacky Sack. “That’s all I really wanted to do,” he said. After high school Zerbe worked a series of odd jobs while taking a class here and there at Seattle Central. “Then I found out you could get paid to play hacky sack,” he said.

A California-based businessman developed a show that would be performed at school assemblies. The show had an opening for someone who knew how to juggle. Zerbe heard about the opportunity through the grapevine. There was only one problem — Zerbe didn’t know how to juggle. “I just started practicing,” he said. “I remember one night I told myself I’d keep going until I could do 100 throws without dropping a club.” It took most of the night but Zerbe achieved his goal. He got the job and spent five months on the road juggling and showcasing his hacky sack skills. “I did three shows a day, five days a week,” he said.

Zerbe found his calling during that tour. He enjoyed being on the road and getting people to laugh. He also liked the challenge that comes with performing in front of an audience and the discipline it takes to do it well. “I just thought, ‘I’m going to be a professional juggler,’” he said. “I’m not going to make much money but I wanted a job I didn’t hate.”

The following summer Zerbe and a friend started working together as street performers in Seattle. The pair ended up performing together for 10 years. Zerbe is now a solo act and his show “Zaniac” is both well-respected and very popular. The show “zigzags between a comedic onslaught of absurd ideas and odd skills” which include beatboxing, juggling, dancing, singing and magic. During his career Zerbe has appeared on “America’s Got Talent” and “Last Comic Standing.” He is also a two-time Guinness World Record Holder.

Zerbe’s life has changed in the last two decades. He’s married now (his wife is in the Footbag Hall of Fame) and has two kids. Those carefree days when he could drive to a show, perform, then drive to the next show before ending the day sleeping in his van, are gone. “That’s a young person’s thing,” he said.

Zerbe has reached the point in his professional life where he can pick and choose. “I’m taking work that’s coming in but I’m not actively pursuing anything,” he said. Instead, Zerbe is focusing his energy on school. “I think I want to teach middle school,” he said. “I’ve worked with kids over the years and I enjoy it. They’re pretty cool when they aren’t being annoying.”

This quarter marks the first time Zerbe has been on campus as a student. His first three quarters were held remotely. “I really liked having classes over Zoom and the flexibility that comes with it,” he said. “Overall my experience at UW Tacoma has been great and the professors have been really generous with their time.”

He may not have a bachelor’s degree yet, but Zerbe is already teaching. Over the past few years Zerbe started helping a younger performer improve his skills and develop an act. “He had the personality and the discipline needed to succeed in this business,” said Zerbe. “I had a really great mentor and I’ve always wanted to be that for someone else.”

Alex Zerbe knows a little something about juggling and, right now, he’s got a lot up in the air. “Sometimes it gets a little overwhelming,” he said. “I start thinking ‘Oh, I have to clean the bathroom and I need to study but the dog has to be let out and I have to pick up the kids but I’ve got to practice my routine for an upcoming show.’”

A person can only handle so much. Every juggler, even the most experienced, drops a club or a chainsaw or whatever it is they’re working with. It’s inevitable. “I think failure is the path to success,” said Zerbe. “For me, it’s more fun to learn a new trick than to do what I already know how to do. It is the process of learning — that’s the fun part. You get to discover and you get to see yourself improve.”