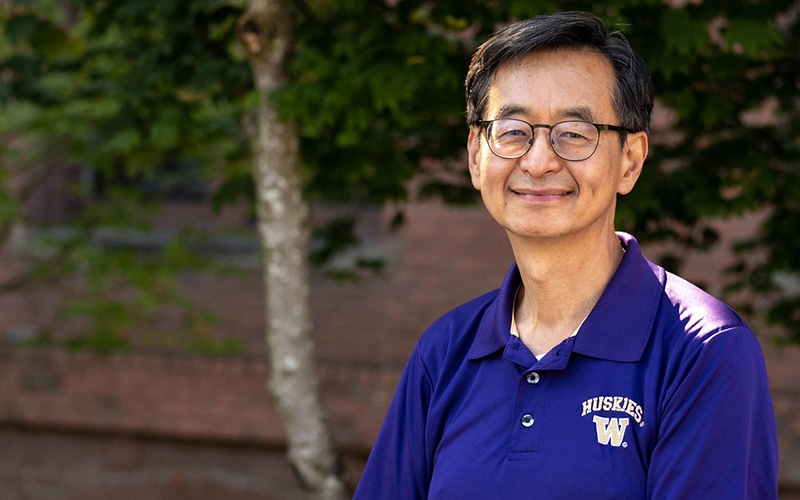 Expanding support for college-bound Asian Americans and Pacific Islanders is a top priority for Patrick Pow.

More than 1 in 5 students at UW Tacoma identify as Asian American or Pacific Islander, designations that include distant homelands and diverse heritages: Samoa, Hawaii, Guam, Tonga, the Philippines, Vietnam, Korea and more.

Patrick Pow, as a vice chancellor of information technology might, scrutinized the numbers and — factoring in mixed race and international students — believes more like 1 in 4 of the university’s nearly 5,400 students belong to those groups. Though experiences vary, they share many of the same challenges and are often the first generation of their families to attend college. And they need support to overcome them and thrive. Pow, a native of Hong Kong, has been at the center of efforts to provide it.

That support includes mentoring, promoting campus jobs and pushing for UW Tacoma students to be eligible for scholarships from the nonprofit APIA Scholars, financial support that nearly 30 students have been awarded. He’s worked to solidify connections with community colleges such as Highline College that send graduates to complete degrees at UW Tacoma.

“I was able to learn through my experience here that I could be adaptable, that it’s okay to not be good all the time, that I could always be better next time.”
——Fuifui Ah Kuoi, ’21, Ethnic, Gender & Labor Studies

A big reason I decided to come here is because I knew Patrick was here,” said Fuifui Ah Kuoi, a recent graduate in ethnic, gender and labor studies who met Pow through student groups at Highline and sees him as a mentor.

Pow led the effort for UW Tacoma to be designated an Asian American and Native American Pacific Islander Serving Institution (AANAPISI), bringing eligibility for federal grants similar to those Hispanic and historically Black colleges receive. The university is seeking such a grant and Pow, along with his wife, Amy, made a significant leadership investment to leverage resources for the effort: They donated about $86,000 to form the Asian American and Pacific Islander (AAPI) Impact Endowment, with one intent being to help ensure support and programs are sustainable after any grants run out. Others have donated to the endowment already, and Pow plans to make additional contributions and spur others to give as well.

“Patrick is just incredibly passionate about this work, which really goes above and beyond his position as vice chancellor of information technology,” said Cassie Miura, an assistant teaching professor and director of grants and special projects for the Office of Equity & Inclusion. “He’s persistent, creative and expansive in his thinking about different ways we can support AAPI students.”

“Patrick is a wise soul who is very clear about what he stands for and what he believes,” said James McShay, vice chancellor for equity and inclusion. “He’s always thinking ahead.”

Asian communities are intertwined, often painfully, with the history of Tacoma and the university. The city was the site of the expulsion of hundreds of Chinese residents in 1885, amid anti-Asian sentiment not unfamiliar today. The university itself adjoins what was once a thriving Japanese community, one decimated by World War II incarcerations. The still-active Tacoma Buddhist Temple and The Whitney, once a Japanese church and now home to UW Tacoma's art programs, sit on campus. It was also home to the now-gone Japanese language school, where Japanese Americans were gathered for transport before incarceration in Puyallup and then camps.

Today, Asian American and Pacific Islander students face different challenges as immigrants and first-generation individuals. Their parents may fully back their child going to college but, lacking the experience themselves, don’t know how best to support them. Students, often lower income, face financial and job pressures. Asian students, in particular, confront the “model minority” fallacy of being strong in math and science and just naturally good students who don’t need help to succeed.

“Students come with so much hope and a sense of determination,” McShay said. “They have a lot of weight on their shoulders; their families are looking for them to be successful on this educational journey. They come with so many strengths and gifts, but they have access to fewer tools to help them overcome some of the barriers that exist for them as they pursue their education.”

For these students, Pow and others see the need to create a sense of belonging, provide opportunity and become a university that reflects — and educates them about — their heritages and experiences. When Pow came to the U.S. to attend the University of Washington, he recalls sitting quietly in the back of the classroom. He’d like to help students develop the confidence and voice that took him years longer to find.

“I just hope that we can lessen the barriers and hope they are proud of themselves and feel they belong,” Pow said.

“He’s very focused and incredibly student centered. It’s quite unusual for an administrator to spend so much time with students,” said Tanya Velasquez, associate teaching professor and a faculty development associate for the Center for Equity & Inclusion. “He is in touch with their needs and what their stories are.”

Pow can relate because his story is similar. Born in Hong Kong, he knows well the dislocation and disruption immigrant families can undergo. His grandparents and father were born and made their home in in Japan but returned to mainland China with World War II’s onset. Not many years later, with the Communist takeover, they fled to Hong Kong. Pow ventured to Seattle to study and then did graduate work in British Columbia. He worked in Hong Kong, Canada, Great Britain and Virginia — mostly in higher education — before finding a home in Tacoma 20 years ago.

Pow is involved in the community, serving on the board of the Chinese Reconciliation Project Foundation and recently joined the Pierce County AAPI Equity Advisory Group. On campus, he’s known as a count-on-it presence at Pacific Islander Student Alliance (PISA) and other student organization events and has worked to connect them to organizations at community colleges. Ah Kuoi first met Pow at such an event at Highline — where he made a point of praising her Samoan language speech — and then joined PISA after moving to UW Tacoma.

“He’s always asking me about whether I’m doing good in the school or if I need anything,” Ah Kuoi said. “I sometimes wonder how he does it, how can he be everywhere? Patrick just has a genuine, welcoming vibe. He has helped me through my journey in school because he was a consistent presence.”

She said a sense of connection and belonging helped her grow during her college years, which were stretched out by finances and uncertainty about her path. Now, she’s looking to put her degree and interest in media to work telling stories of disadvantaged communities. Her time at UW Tacoma was good but not easy amid the pandemic.

“I was able to learn through my experience here that I could be adaptable, that it’s okay to not be good all the time, that I could always be better next time,” she said.

The endowment could help in a number of ways, guided by the vision of inspiring “current and future Asian American and Pacific Islander generations, and other students supported by this endowment, to one day pay it forward and positively serve and impact our region and its diverse communities.”

Specifically, the Pows hopes to foster civic engagement by those students — and ones of other ethnicities as well — through internships and similar experiences; develop programs to support transfer students; collaborate with programs that help high school students headed to UW Tacoma; provide professional development so faculty and staff can better understand and assist students; and support STEAM access and first-generation student programs.

Many options could come from the endowment and any grant that follows. McShay mentions the value of internships after freshman year, to solidify connections at a time students tend to drift from school. Miura and Velasquez envision degree programs — the campus has none — exploring Asian and Pacific Islander cultures and experiences. All mention the need for long-term, systemic university support.

“So much of the work on our campus that is visible to students is initiated by them. It shouldn’t only be students advocating for themselves,” Miura said.

“The goal is to make sure it’s on the minds of everybody, and that they’re building it into budgets, policies and everyday practices,” Velasquez said.

AANAPSI grants typically run five years and about $1.5 million. Pow has seen institutional priorities change over time and observed programs and staffing fall away once grants disappear. If a grant is received, he supports using a portion to build the endowment, as federal rules allow, to provide long-term funding.

Pow himself is self-effacing, which may help explain — along with his approachability and willingness to help — the connections he makes with students.

“I have been fortunate to work in different higher-ed institutions and move up. Many of the students that I work with are better and smarter than me, and I want them to help continue to build this country,” he said. “They have a very bright future. They need to serve this country and become leaders of this country.”

THIS IS THE UNIVERSITY
OUR COMMUNITY BUILT

Support That Makes a Difference

You can make a gift now to the Asian American and Pacific Islander (AAPI) Impact Endowment. Or, for more information please contact the Office of Advancement at 253-692-5753 or uwtinfo@uw.edu.

Having served two terms as president of Associated Students of UW Tacoma (ASUWT) and earned a degree in healthcare leadership, one might think Vinny Da came to UW Tacoma destined to thrive but that’s not entirely true.

A first-generation college student and son of Filipino immigrants, Da describes being shy and less involved at first and even doubting whether he should be in college. His path and eventual success, though, came as his sense of belonging grew through mentoring and support from groups like the First Generation Fellows. For Da valuable financial aid came from APIA Scholars, which is open to Asian American and Pacific Islander students.

Patrick Pow, vice chancellor of technology and a mentor to Da, was integral in bringing those scholarships to campus and active in a peer-to-peer engagement group for the scholars. Like Pow, Da believes the support and mentoring that he received need to be built into the system, and that the Asian American and Pacific Islander (AAPI) Impact Endowment – created by Pow and his wife, Amy – could help do that.

Many of the supports and growth opportunities Da mentions align with the goals of the endowment: Professional mentorships in area industries, peer-to-peer support and professional development to foster skills like networking, programs to expose students to area businesses and organizations. Da, whose older brother James is also a UW Tacoma graduate, can even see a gathering place “to help create a better sense of belonging” on a campus home to many commuter students.

Da, who recently started work with MultiCare’s Center for Health Equity & Wellness, would like others to have the education and leadership opportunities and support he did. He sees them as vital to the success of the sizable but diverse communities of Asian American, Pacific Islander and first-generation students at UW Tacoma.

“It really opened my horizon and perspective on life in general and gave me leadership skills to feel successful, that I could lead and manage teams and move things forward,” Da said.