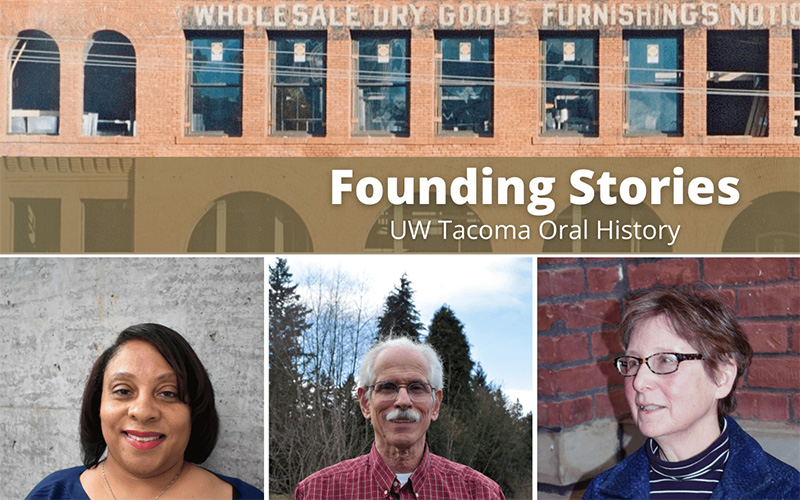 On the eve of our 30th anniversary, the UW Tacoma Library is spearheading a project to document the origins and development of UW Tacoma through oral history.

Note: Since this story was originally published in early 2020, the Oral History Project digital collection has been released. The collection currently comprises 37 oral history interviews with full transcripts and audio recordings.

Gathering the Voices of Those who Built UW Tacoma

Nearly 30 years ago, in March 1990, the News Tribune asked residents of the Tacoma area where the new “branch campus” should be located. Folks could choose among the four locations under consideration: available farmland in Fife, an area on the Tacoma Community College campus, a site in the Hilltop neighborhood, or a location in downtown Tacoma. As the numbers came in, residents clearly favored the Fife and TCC locations over the downtown site.

Even as the News Tribune story ran, the legislature had already approved funding to start the campus. Its new temporary quarters in the Perkins Building in downtown Tacoma were already under construction and 13 new faculty had been hired to begin teaching classes.

In the face of clear location preferences among the public, how did the university and the legislature ultimately settle on downtown as the place for the permanent campus?

As UW Tacoma approaches its 30th anniversary, it is an opportune time to begin asking this and many other questions about the beginnings of what was then referred to as a “UW branch.” UW Tacoma Oral History: The Founding Stories aims to do just that: inquire into the origins and influence of this campus by gathering the voices of students, faculty, staff and community members who have shaped it over the years.

Thanks to generous support from Rod Hagenbuch, the Founding Stories project publicly launched in the fall of 2019 with the aim of collecting several dozen oral history interviews. Led by Joan Hua, oral history project manager, it will focus on people who can provide insights into the founding and development of campus: early graduates, founding faculty of the academic programs, campus administrators, long-serving staff members, and community members. All of these oral history interviews will be transcribed, publicly available and searchable in a digital collection hosted by the UW Libraries. Together, they will begin to create a collective portrait of individual experiences of the birth, evolution, and impact of the UW Tacoma campus.

Expanding the Scope of the Oral History Project

The project began in 2017 as a collaboration between Interim Director of the Library Justin Wadland and School of Interdisciplinary Arts & Sciences associate professor Charles Williams. To prepare for the first phase of the oral history, they co-wrote a history of campus for HistoryLink.org, the Washington State history encyclopedia, drawing primarily on newspaper articles, archival material, and unpublished narratives of campus history. With funds from the Friends of the UW Libraries, they then initiated the first phase of the project, hiring Joan Hua as a part-time graduate student assistant to support the project.

As the oral history team concluded the first phase of the project, the researchers recognized that there was a much larger story to tell and many more people to include for a fuller portrait of the institution. A comprehensive oral history collection could present a rich and complex narrative, interweaving themes of higher education in the South Puget Sound, equity and social justice, urban revitalization, historic preservation, natural and built environments and more. At the same time, the collection would preserve the history of UW Tacoma and strengthen connections with the local community. Stewarded by the UW Tacoma Library, it could leverage the resources of the UW Libraries to make these digital primary source materials available for future scholarly and creative work.

With support from the UW Tacoma administration, the Library developed a proposal that would realize these goals and significantly expand the scope of the oral history project. The generous support from Rod Hagenbuch enabled the Library to expand Joan Hua’s role to full-time oral history project manager. She will work on the project through September 2020, conducting and processing interviews, designing the online collection, and ensuring the long-term preservation of the digital files. Williams and Wadland collaborate with Hua in the ongoing planning of the project and will continue to participate as interviewers.

The team intends to have an expanded collection available by summer 2020, in time for UW Tacoma’s 30th anniversary. You can follow the progress of the project on the Library blog under the tag #UWTFoundingStories, where monthly updates on the project will be posted.

This is the University
our community built

You can help preserve and interpret the history of UW Tacoma by making a gift to support UW Tacoma Oral History: Founding Stories.