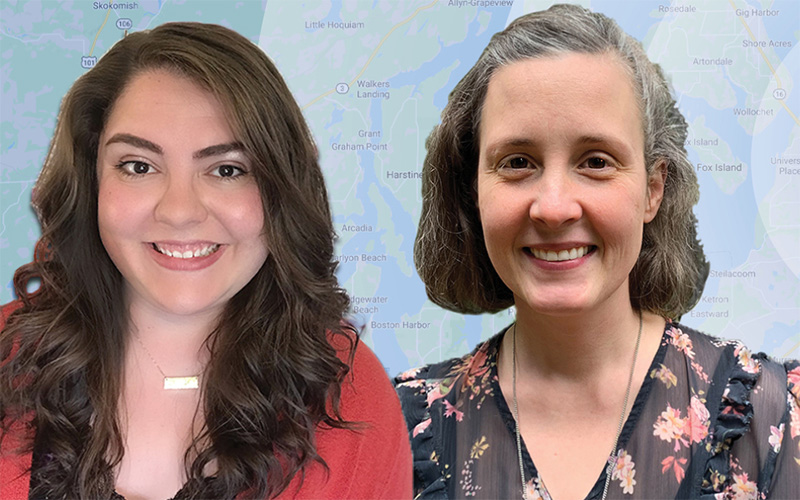 Making a Place at the Table

Darcy King and Taylor Saunders hope to fill the gaps in services for adults diagnosed with Autism Spectrum Disorder.

UW Tacoma graduate student Darcy King set a date for herself. “I said, ‘when my youngest goes to kindergarten, I will go back to school—and that’s what I did,” said King. The mother of three enrolled at Green River College in 2013. She completed her associate’s degree then transferred to Pacific Lutheran University where she earned a degree in social work. King started at UW Tacoma in January 2019 and will soon complete her master of social work. “I knew I’d go back, I didn’t know it’d take this long,” she said.

Taylor Saunders grew up in Tacoma. After high school she pursued an anthropology degree at Washington State University. “I was dead set on being an anthropologist and that’s still something I enjoy, but social justice became more important to me,” she said. Saunders moved back to Western Washington after completing her bachelor’s. She got a job at Trillium Employment Services in Auburn. “I kind of fell into social services and I really fell in love with the population I was working with, which were adults with developmental disabilities, including autism,” said Saunders. This experience led Saunders to UW Tacoma and the master of social work program. 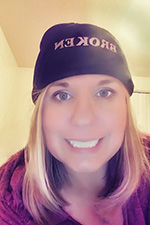 Heather Swanson seems to have boundless energy. She has held a fellowship from the Simon Family Endowment over the past year. She was named to the Husky 100. She has been working to found a Tacoma campus chapter of Square Pegs Meetup, a social gathering for adults on the autism spectrum. And she is the vice president of the campus chapter of the National Alliance on Mental Illness.

The COVID-19 pandemic has not stopped her organizing efforts, just pushed them in a new direction. Square Pegs will go virtual for now, and the start of her final practicum at the Center for Independence in Lakewood, Wash., is delayed until the disease recedes further. But she remains committed to her belief that , in her experience, inclusion and social-support can have a positive impact on adults with autism.

King and Saunders have different stories and have taken different routes to campus but both are passionate advocates for people with autism and are committed to serving this community in their professional lives. For this reason they were awarded the Simon Family Endowment MSW Fellowship.

The Simon Family Endowment was created in 2017. Part of its mission is to address the shortage of lifelong care for adults diagnosed with Autism Spectrum Disorder or an intellectual disability. The Simon fellowship helps advance this goal. “The graduate social work students selected for the fellowship prepare now for a future in serving autistic adults in the South Sound,” said Dr. Ronald San Nicolas. San Nicolas is the Simon Family Endowment MSW Autism Field Unit Coordinator.

The fellowship is practicum based, meaning fellows engage in fieldwork. “This is achieved by placing fellows in agencies that, in the long run, become employment opportunities after graduation,” said San Nicolas. Fellows also receive financial support through the Simon Family Endowment.

King has a personal connection to autism. “In less than a year span, two of my girls were diagnosed with autism and the third was diagnosed with Type 1 diabetes,” she said.

King received the news about the same time she went back to school. “The next four to five years were pretty rough,” she said. “There were a lot of therapies and a lot of appointments and I was kind of stumbling around trying to navigate how to meet everyone’s needs.”

In those early weeks and months King wouldn’t let herself take a break. “It took total exhaustion for me to be, like, ‘Okay, I have to find a system that works because this isn’t sustainable,’’ she said. King’s parents stepped in to help. They made the cross-country trek from Florida to Washington. “They live with us,” said King. “They are wonderful and knowing you have support makes things a little bit easier.”

Those struggles and frustrations also provided King with perspective. King is a Navy veteran and had access to different resources including the military’s Exceptional Family Member and Extended Health Care Option programs. “My daughters really benefited from these programs,” she said. “It’s important to get kids the support they need early on; not doing so can be really detrimental and could lead to crises in adolescence.”

King’s personal experience combined with her practicum at the State of Washington’s Developmental Disabilities Administration provided insight into where the system can be improved to assist people with autism. “Supports and advocacy really need to be strengthened throughout the early academic years in order to more appropriately serve people with autism once they’re into adulthood,” she said.

All students in the Master of Social Work program put together a capstone project. King devoted hers to the creation of a theoretical life skills course within the education system. “I focused on the high school level, but I believe it should be something that starts in the very beginning and continues all the way through college,” she said. “I’m talking about things that neurotypical individuals take for granted like social engagement and budgeting. We can’t just assume people with autism will pick up basic life skills along the way.”

The world was made with little consideration for people not deemed neurotypical. “Everything is built for us and it makes it easer for us to just kind of flow throughout society and access resources that we need,” said Taylor Saunders. “Unfortunately, that’s not the case for people with autism.”

Case in point: fluorescent light. Many of us probably don’t pay much attention to it. Fluorescent light’s ubiquity relegates it to the quotidian realm of the everyday. “It’s fairly common for people with autism to be either over- or under-sensitive to fluorescent light,” said Saunders. “That can be torture for someone sitting, say, in a classroom.”

Saunders hopes to change how the world is constructed and who gets a seat at the table. “Adults with developmental disabilities are an underserved population, particularly those with autism and it bothers me,” she said.

Saunders decision to pursue a master’s stems from her desire to push for change. “I felt like it would accelerate my ability to make a difference,” she said. Saunders did her practicum with the University of Washington Autism Center – Tacoma. “For my capstone I chose to create a social work position at the autism center here on campus because there is not currently a full-time social worker there,” she said.

The creation of a theoretical full-time position would address a real need. “There aren’t enough clinicians who are equipped to meet the needs of adults with autism in our area,” said Saunders.

King and Saunders are nearing the end of their time at UW Tacoma. Both are considering pursuing doctoral-level degrees, but their immediate focus is on serving the local autistic community. “This is where my heart is,” said Saunders. King echoes this sentiment and points to a possible direction her career could ultimately lead. “I know that policy change within the education system as it relates to persons with disabilities is kind of a big area for me,” she said.

As for the fellowship, King and Saunders say it has provided them with needed support and direction. “It has been a great experience and Ronnie [San Nicolas] has been a wonderful mentor,” said Saunders. Going forward, King believes she has a better understanding of how to improve and expand opportunities for people with autism. “I have a much better sense of where the gaps are and how they can be addressed,” she said.

The School of Social Work & Criminal Justice's Dr. Charles Emlet has been inducted as a fellow into the American Academy of Social Work and Social Welfare.