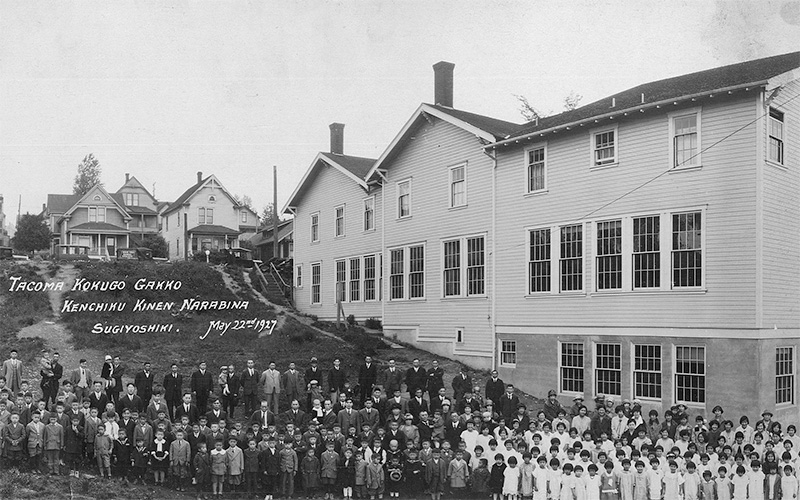 The University of Washington Tacoma celebrates the new Japanese Language School Memorial and the contributors who made it a reality with an unveiling October 10, 2014. Supporters and community members are invited to view the stunning bronze sculpture “Maru,” by Northwest artist Gerard Tsutakawa, which anchors this memorial. (Register for the event.)

Sculptor Tsutakawa and Landscape Architect Kenichi Nakano collaborated with an advisory board of former students as they designed the memorial. Important leadership funding was provided by the Greater Tacoma Community Foundation, and contributions from many other donors soon followed.

The nine-foot sculpture, situated on 17th Street and Pacific Avenue, draws in visitors and invites interaction and contemplation. Nearby plaques inlaid into Cascade granite boulders tell the story of the school, its community, and the supporters committed to preserving and celebrating this history. UW Tacoma is grateful to everyone who helped make this memorial a reality.

From 1911 through 1942, the Japanese Language School brought the families of a thriving urban neighborhood together to support the future of their community and their children. The school, known as Nihongo Gakko, was located on the 1700 block of Tacoma Avenue in the neighborhood above Commencement Bay, at the heart of a bustling community of hotels, restaurants, laundries, banks and other business and surrounded by the homes of hundreds of immigrant families.

For three decades, the school instilled in its young students the high moral and cultural values of their Japanese heritage, but also sought to create in them a strong commitment to American citizenship. The children attended public schools and, after school was out each day, came together at Nihongo Gakko. Here they learned the language, arts and cultural traditions of Japan, the homeland of their parents and grandparents.

Leading the school and held in the highest esteem by the entire community was Sensei Masato Yamasaki who, with his wife Kinu, inspired the students to behave with dignity in an environment fraught with discrimination. In their teachings, the Yamasakis personified the community’s pride in being American while working to help children embrace their cultural heritage. They encouraged children to live by a moral code that called for them to be highly ethical and respectful—to behave as model citizens representing their community during a time when discrimination against Japanese and other people of color was entrenched.

Unlike most other Japanese language schools on the West Coast, the Tacoma school was not sponsored by a Buddhist temple or a Christian church, at the insistence of Masato Yamasaki, who wanted the school to stand on its own as a center for all Japanese American youth.

Poignantly, the school served as the spot where the United States conducted the official registration of Tacoma’s Japanese community before sending them to internment camps. Most spent the duration of the war in camps—with the notable exception of those who served in the U.S. Army instead (including several who were recruited to military intelligence because of the language skills they had developed at Nihongo Gakko).

Mr. Yamasaki, as a noted community leader, was among the first to be arrested as World War II began. He died in 1943 in the Lordsburg, NM, internment camp. Mrs. Yamasaki passed away in 1946 in Tacoma.

After internment, much of the Japanese community did not return to Tacoma, and the school’s wooden structure stood mostly vacant.

In 1993, the building was purchased by University of Washington Tacoma. While the university has developed a reputation for beautifully restoring historic brick buildings in the area, the wooden Japanese Language School had deteriorated beyond salvage and was labeled a safety hazard by the City of Tacoma. A team of architectural consultants determined restoration would need to be so extensive the result would have been more a replica than a historic structure. Given its commitment to historic preservation, UW Tacoma did not wish to remove a structure of the significance of the Japanese Language School, but found it had little choice. The building was removed in 2004.

UW Tacoma put its efforts into creating a memorial that would preserve the heritage of the city’s Japanese community in a way that educated future generations about a still-relevant and difficult chapter in U.S. history.

The university went through several memorial designs. An ambitious design by landscape architect Kenichi Nakano (whose mother, Yaeko Nakano, attended the school) stalled with the onset of the recession and the death of one of the lead community volunteers, Joe Kosai. Eventually, the university and the advisory board of former Japanese Language School students agreed on a sculpture design by renowned artist Gerard Tsutakawa, done in collaboration with Nakano. Tsutakawa is known for his iconic “Mitt” sculpture at Safeco Field.

The Japanese Language School memorial is a 9-foot-tall bronze sculpture called “Maru,” or “Circle,” situated among a landscape design of boulders and Japanese maple trees. The sculpture has a large cut-out circle, wide enough for people to sit in, and is designed to be interactive.

“Maru” draws people to the memorial to learn the story of the Japanese Language School and the important lessons it represents from our nation’s history. Two large metal plaques, set into the smooth-cut faces of Cascade granite boulders, accompany the sculpture. One tells the story of the school, its honored principal, and the bustling Japanese-American community that did not return to downtown Tacoma after World War II. The second plaque lists the donors who made the memorial possible. One of the boulders originally selected to feature a plaque broke during fabrication; the resulting piece of rock has a shape evocative of Mt. Rainier. Tsutakawa and his colleagues, Robert Hoshide and M. Jim Yamaguchi, celebrated this happy accident by including this stone with the others as part of the memorial.

“Art has changed the way we see the world, both our past and our present. Gerard Tsutakawa brings sensitivity and refinement to mark a painful historical time in the life of our city,” said Stephanie Stebich, executive director of the Tacoma Art Museum.

The Japanese Language School memorial is sited along a beautiful new bicycle-and-pedestrian pathway, called the Prairie Line Trail—UW Tacoma Station. The path follows the tracks of the original transcontinental rail line, featuring a series of park-like gathering places, and will become part of a larger trail system.

Placing the memorial here creates high visibility, not just within the campus community, but also among families, athletes, tourists and others who will frequent the trail, along with patrons of businesses and restaurants in our university and museum district.

Though few students returned to Tacoma after the war, many of the Japanese Language School’s alumni maintained contact with each other. Many went on to distinguished careers across the United States as physicians, dentists, nurses, engineers, attorneys, teachers, university professors and corporate managers. One became a federal judge, another a heart surgeon. Alumni of the school served in the highly decorated 442nd Regimental Combat Team and in the Military Intelligence Service, where bilingual skills were often a prerequisite.

As the university approached its decision about what to do with the building, it began to establish relationships with some of these former students, who took on an active role in the fundraising and creation of the memorial. Dr. Ryo Munekata of Los Angeles reached out to former students and their families outside the Puget Sound region. Greg Tanbara, son of former student Kimi Fujimoto Tanbara, has served as a lead volunteer on the project since 2010, along with Debbie Bingham, head of the City of Tacoma’s Sister City program and a community leader.

The campaign team raised in excess of the $160,000 goal to build the memorial. The fundraising campaign leadership gift of $75,000 came from the Donald R. and Mary E. Williams Arts Fund of the Greater Tacoma Community Foundation. This gift catalyzed broad support for the project. More than 85 gifts from throughout the regional community and across the country were secured.

In 2003, shortly before the Japanese Language School building was taken down, the community joined many former students who gathered for a special day at UW Tacoma—with tea ceremonies, flower arranging, calligraphy, Iaido, singing and reminiscence.

In addition to the memorial, the University of Washington Tacoma has helped preserve the heritage of the Japanese Language School through academic research. Professors Lisa Hoffman and Mary Hanneman have recorded more than 40 oral histories of the former students of the school. Learn more about the project via the video below.

Linking Past to Present

UW Tacoma is pleased to link the area’s history to present-day activities with this memorial. Like the Japanese Language School, UW Tacoma exists in a vibrant urban setting. Like the Yamasakis, UW Tacoma’s professors and academic leaders are dedicated to preparing students for citizenship, contributing to the region’s cultural life and maintaining a global perspective. Like the Japanese Language School, UW Tacoma has the mission of serving its local community.

The Japanese Language School Memorial forms a place to gather, to contemplate and to reflect on our area’s historic, diverse, and sometimes painful past. It offers a chance to consider the impact one school can have, changing students and community through education.

In their new book, Mary Hanneman and Lisa Hoffman share the history of Tacoma's Nihonmachi and the Japanese Language School once located on what is now the UW Tacoma campus.