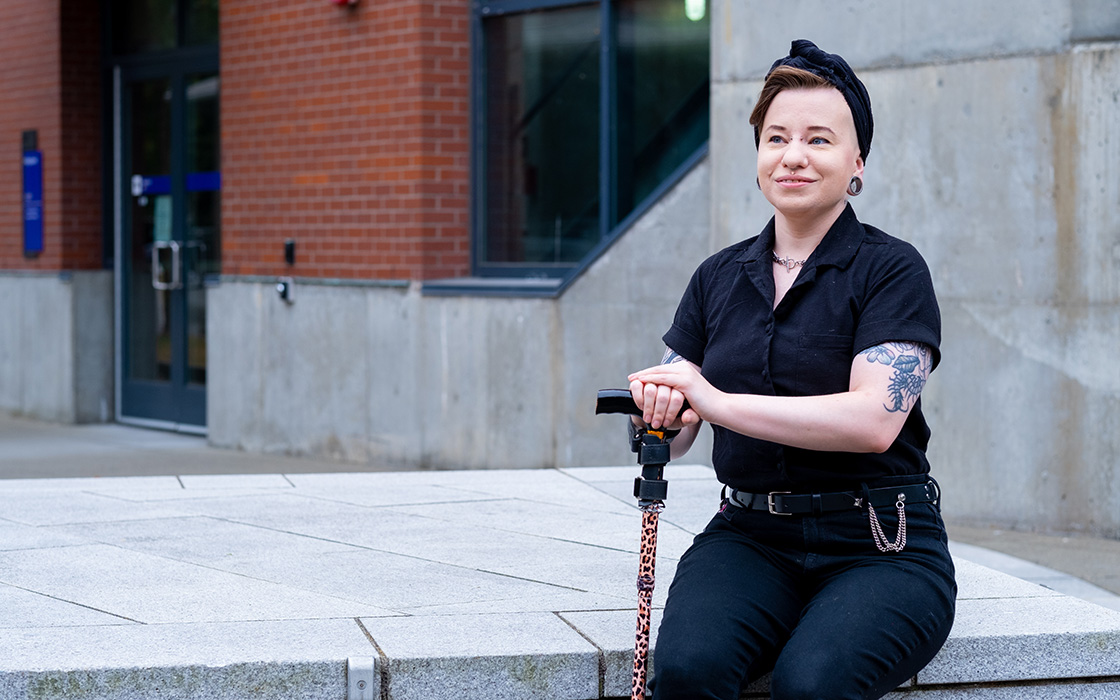 Dr. Vern Harner has stretched ears and multiple facial piercings. Their hair is shaved on the sides and tattoos cover their arms. “Growing up I didn’t see a lot of professors or people with Ph.Ds. who look like me,” said Harner.

Harner recently completed a Ph.D. in social work at UW in Seattle. This fall they join the faculty at UW Tacoma as an assistant professor with the School of Social Work & Criminal Justice. “I’m prioritizing a social justice and equity centered lens while doing my best to make sure that what we’re focusing on in class is applicable to practice,” they said. “We’re not just talking about things to talk about them.”

Harner and I spoke over Zoom in early August. They are in their cramped office on the Seattle campus. Books crowd the edges of the screen and beads of sweat form on Harner’s forehead. It’s ninety-plus degrees outside and their office doesn’t have air conditioning. Harner is wearing a black shirt with white lettering that reads, “My love language is policy.”

The future academic grew up in Germany and in different locations across the United States. Their family — dad, mom, brother — eventually settled in Omaha, Nebraska. It was a place to live, but that didn’t make it a home. “I never really fit in,” said Harner.

Maybe it was their outsider status or maybe Harner has a natural inclination toward advocacy. Whatever the case, they weren’t shy about making their voice heard. “I was an activist in high school,” they said.  “If I wanted to exist as a queer person in high school at that time, I had to be an activist and advocate for my right to exist.”

Harner lived on their own during their senior year of high school. “My dad lost his job during the recession and moved to Arizona,” said Harner. “I could have gone with him but I decided to stay until after graduation.”  Harner moved to Arizona after high school. “Because my father lived there I was eligible for in-state tuition,” they said. “Plus, Arizona State University (ASU) has a really good fiber arts program.”

Harner completed their bachelor of fine arts at ASU. As with so many other people, what Harner went to college for did not become their career. Harner’s passion for community organizing ultimately pulled them in a different direction. “After my undergrad, I ended up leading a community-based harm prevention program in Phoenix, that, at the time, was combating binge drinking in the LGTBQ community,” they said.

As part of this work, Harner belonged to a community coalition. “It was there that I met Dr. Tasha Mendoza who is a professor of social work at ASU,” said Harner. “She’s out as a lesbian, she’s Latina, she has visible tattoos and is embedded in the queer community. She said to me, ‘Hey, you are good at research and you seem to really enjoy it. Have you thought about a Ph.D.?’ ”

No, Harner hadn’t thought about a Ph.D., but the conversations with Mendoza opened their mind to the prospect. Harner decided to go back to school and pursue a master’s in social work at ASU. Master's degree in hand, Harner then moved to Seattle to pursue the Ph.D. at UW, which they completed in early August of this year.

Finishing a Ph.D. in social welfare requires defending a dissertation. Harner’s dissertation (it’s really three separate projects) focused on the trans community. “I’m out as trans,” they said. “I’m embedded in the community and by doing trans-focused research I can offer additional insight because I live and breathe trans culture.”

Harner’s work is part of a larger sea change in academia. “Eight or nine years ago, much of the work about trans folks was done by people who were not that familiar with the community,” they said. “It wasn’t always, but a lot of times it would end up with this harmful and negative lens that says, “Oh, it’s so hard to be trans, there’s all of these negative things that come with it,’ but that hasn’t been my experience.”

For part of their dissertation, Harner partnered with Dr. Megan Moore to interview members of the trans community about their preferences when discussing gender with healthcare providers. “As part of the project we were able to hire three trans research assistants which was super exciting,” said Harner. “There is a need to support trans scholars, particularly trans scholars of color.”

Policy is Vern Harner’s love language. “To me it means, walk the walk,” they said. “Put your words into action through policy to enact substantive change for communities that we need to see.” Harner is doing that with their research and with advocacy within UW.

In 2021, Harner undertook a successful effort to change the University of Washington’s diploma name policy. Under the old policy the UW only allowed full legal names on diplomas. If students went by another name — for example, because their gender no longer matched what was assigned to them at birth — then their identity wasn’t reflected on the diploma. Harner launched a petition that garnered more than 30,000 signatures. They also met regularly with the registrar and the Chair of the Faculty Senate; the Senate ultimately had to vote to approve any change.

Harner’s commitment extends to the classroom. “Here at UW my transness has never been a point of contention with students in the classroom,” they said. “It’s empowering to get your needs met and is part of what drives me. I make every effort to meet my student’s access needs so that they’re able to fully engage in the class and focus on course content.”

There’s a “classic image” of a professor. You’ve probably seen it-disheveled hair, beard, tweed jacket with patches at the elbows. Harner doesn’t fit into this “classic” image. For starters, they don’t own a tweed jacket. They do have tattoos and piercings. They’re trans. You know what? Harner also has a Ph.D. after their name.