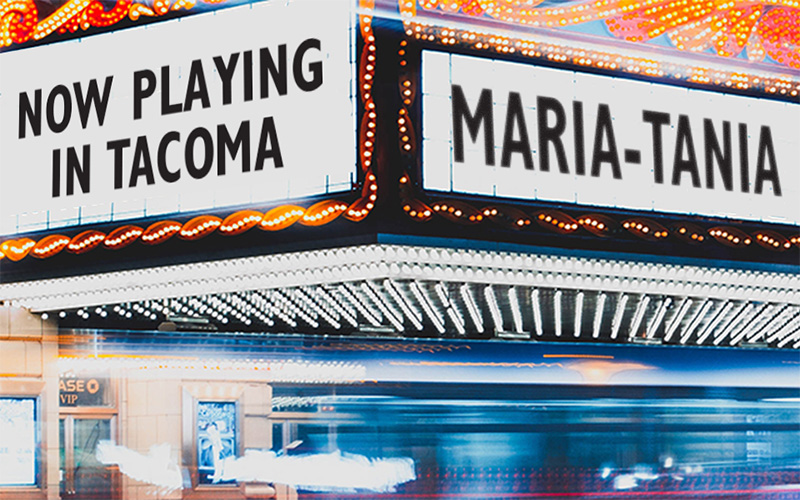 The Show Will Go On ... Somehow

Act I Scene I

The interior of a coffee shop on the University of Washington Tacoma campus. A bicycle hangs from the ceiling. Paintings from local artists adorn the walls. The tables and chairs are a mismatched hodgepodge.  The door opens. A breath of cold, damp air momentarily fills the space. It’s early February 2020. Headlines refer to coronavirus and something called COVID-19. People in other countries are getting sick and some are dying. The news creeps its way into local conversation. People talk, maybe worry a little, but the threat has no shape or scope which makes it easier to push to the corner of one’s mind.  At that moment it’s still possible to sit in a crowded coffee shop and have a face-to-face conversation with someone.

Bandes B. Weingarden: You must be Eric!

Born in Spain, Bandes B. Weingarden moved with her mother to Nicaragua in the mid-1970s. Bandes B. Weingarden’s mother is originally from Nicaragua. In 1978 the Sandinsta National Liberation Front begins a campaign to remove President Anastasio Somoza DeBayle from power. Officially, the Nicaraguan Revolution ends in 1990. The conflict devastates the country.

Bandes B. Weingarden: In the early days of the revolution, people didn’t drive much because there were warplanes flying around looking for targets. And when the revolution itself began in July of 1979 I was at my grandparent’s house. So, one day my mom comes to get me from their house. I must have been six at the time. As we’re walking back to my mother’s house, a plane flies overhead. We ducked into a house. People were very welcoming, if there was trouble, they’d help you out. Once inside we noticed an old woman sitting in a rocking chair. I looked down and saw an unexploded mortar shell wedged into the floor next to her!

Bandes B. Weingarden: When I was younger, I felt different from my peers.  I was quiet as a kid and spent a lot of time living in my own head.  When I found the theater kids, the other oddballs, I was home.  I thought, ‘this is amazing, this is really fun and challenging.’ I continued doing theater in high school, but I never thought it would be a career. I went into college as a psychology major and I remember walking into my very first psychology class and there were 250 in this huge seminar and I felt very lost. It took me about a year to officially change my major because I was afraid to tell my mother. She’s wasn’t happy at first, but she came around and has been very supportive.

Bandes B. Weingarden majors in performance at San Jose State University. Early on she is exposed to Chicano theater. Luis Valdez started El Teatro Campesino (Farm Worker’s Theater) in the 1960s. Valdez’s focus on creating theater with a political message becomes a cornerstone of the larger Chicano theater movement.

Bandes B. Weingarden: I never wanted to go off and go to New York and be an actress. I think part of that had to do with being exposed to theater for social change so early on. Also, as a Latina actress I would often be cast as a prostitute or whore. This stereotype kept coming up and I hated it. I wanted to change the narrative and in order to change the narrative you’ve got to be the one making the decisions otherwise nothing gets done.

Teaching seems like a good fit for Bandes B. Weingarden. There’s the built-in performance aspect that comes from standing in front of a room full of people and delivering a lecture. Even so, this isn’t what draws Bandes B. Weingarden toward a career in higher education. Changing the narrative starts with developing new authors.  Bandes B. Weingarden earns a master’s in theater with an emphasis in history and directing from the University of Nevada, Las Vegas. A few years later she completes a Ph.D. at Wayne State University in Detroit.

Big blue letters on a sprawling lemon-yellow backdrop. The Bakersfield sign arches over Sillect Avenue near downtown Bakersfield, California. The sprawling city of roughly 380,000 is Bandes B. Weingarden’s new home. Located in the San Joaquin Valley, Bakersfield is an agricultural hub, not just for the state, but for the country. Maybe it’s the soil or maybe it’s the climate, either way, you plant a seed here and it will grow.

Bandes B. Weingarden: I was an assistant professor of theater at Cal State, Bakersfield.  I taught all the script analysis and dramatic literature courses. My focus there was Latinx theater and that was really useful because CSU Bakersfield is a Hispanic serving institution. Over 50% of the population on that campus was Latinx so my role there I think was very vital. I made sure that the content of my courses was diverse. Whenever possible, I chose to explore texts that were not from the traditional cannon. In addition, when I directed shows both on campus and in the greater Bakersfield community, I chose texts from a diverse sampling, focusing on Latinx playwrights.

The Bakersfield sign sets in the rear view. It’s 2018 and Bandes B. Weingarden is leaving her home of 11 years. She’s accepted a lecturer position at UW Tacoma. Bandes B. Weingarden will teach courses and she’ll also take charge of the university’s burgeoning theater program. UW Tacoma hosted its first theater performance back in 2014. Since then the campus has performed a show nearly every year either at the black box theater in Cherry Parkes or Studio 3 at Tacoma Arts Live.

Bandes B. Weingarden:  I guess I’m the first theater faculty on campus. Part of my job right now is developing classes that will hopefully, in the long run, either make up a focus or a minor. The other aspect of my job and the reason I was hired is that I will direct campus productions.

The COVID-19 pandemic took a wrecking ball to much of modern life, including the arts. The Bandes B. Weingarden-directed rock opera “Next to Normal,” set to open in early April, has been postponed and may ultimately be cancelled. This is after a group of student and community actors spent months rehearsing. In theater, the “show must go on,” but when and how is anyone’s guess.

Bandes B. Weingarden, like many of us, has spent the past few months at home. She’s keeping busy, very busy. Bandes B. Weingarden is teaching online classes this quarter and is also helping co-parent four children. In between all this she’s thinking about the future of theater both at UW Tacoma and in general.

Bandes B. Weingarden: We are all trying to re-imagine an art that relies on human interaction on its most basic level. We can do this and make it be more in line with what the television industry is trying to do, and make it work virtually, but it is not only not the same thing, it is a flawed substitute.

As for UW Tacoma, we’re looking at maybe doing something smaller scale for the fall, perhaps a short one act or a showcase with shorter rehearsal period that ends before the predicted second wave hits. We are being mindful of the upcoming flu season and the possibility that we could see another COVID-19 wave and trying to “plan” around that as much as we can.

In the meantime, I’ve focused my efforts on Cabaret-19. This is a small cabaret, under 30 minutes, where we have asked participants to dream a little and dig deep to find their inner rebels.  The theme of the cabaret is, "The Role I Was NOT Born to Play." Participants chose a role to perform that they would normally not be cast in due to their gender, race or age. The point is to have fun and dream a little. Since there are so many things we feel we can't do right now, we figured we could take the opportunity, to take control of what we can, and sing what we want.