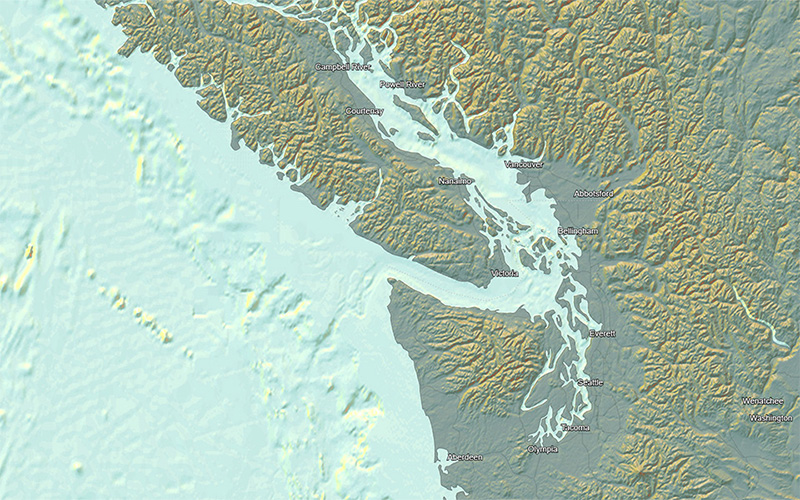 The Puget Sound Institute at UW Tacoma is launching a new program that will use supercomputers to advance ecosystem recovery of the Salish Sea.

If you want to understand where fish or killer whales go, or how toxic chemicals move through the ecosystem, it helps to know how the water moves. The ebb and flow of currents is fundamental to scientific efforts to protect and restore the Salish Sea.

Researchers have known for many years that they could create physical models to simulate the movements of these currents. In the 1950s, engineers created scale replicas out of concrete that used saltwater and colored dye to track the motion of processes like tidal flows and circulation. These scale models were a standard for oceanographers for more than 30 years.

Now, computer models can replace circulating dye and water pumps with just about any conceivable data. They can reveal how water temperature changes, how fast Arctic melting will raise the tideline along the shore, or when global carbon emissions will eventually turn the Salish Sea acidic. They can anticipate herring spawns or answer policy questions about where and how to clean up toxic chemicals.

Providing the region’s policy leaders and scientists with these powerful tools is the goal of the Salish Sea Modeling Center, a new enterprise from the Puget Sound Institute at UW Tacoma. The center will initially focus on expanding the capabilities of the Salish Sea Model, an advanced computer simulator developed over the past decade. The Salish Sea Model accurately describes how water, sediments, and nutrients enter and cycle through the Salish Sea, and is widely used by resource and regulatory agencies in the region. The model was developed by Dr. Tarang Khangaonkar and his team at the U.S. Department of Energy’s Pacific Northwest National Laboratory (PNNL). The work was done in collaboration with the Washington State Department of Ecology with grant support from the Environmental Protection Agency. Khangaonkar, who is both a principal program manager at PNNL and an affiliate professor at UW Tacoma, will serve as director of the Salish Sea Modeling Center. Support for the new center is provided by the Environmental Protection Agency’s National Estuary Program and other regional water quality partners.