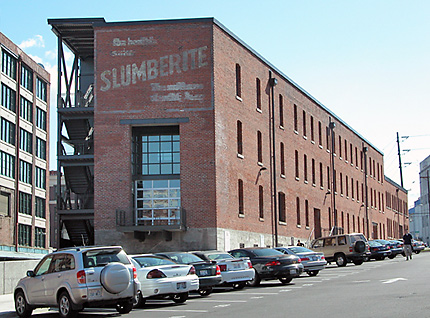 The Mattress Factory is made up of two buildings with very different histories. The southern part was originally the Lindstrom-Berg Cabinet Works and the northern part was a factory built for the Harmon Furniture Company. “Ghost writing” ads for the firm can still be seen on the building’s exterior and on other restored buildings on campus.

Charles W. Lindstrom founded the cabinet company in the 1890s and partnered with Gustave Berg in 1899, just as Tacoma experienced a terrific building boom. The city’s largest wholesale cabinet works, Lindstrom-Berg created hardwood interior fixtures for offices, banks, stores and bars. Their two-story wooden building on this spot was destroyed by fire in October 1907. Architect Frederick Heath designed the new brick building, and it was finished in time for the cabinet works to reopen just three months after the fire. The company, which employed about two dozen workers, remained in business until 1928. The building was later used by several enterprises, including a creamery, a wholesale grocery, a glue manufacturer and a feed wholesaler, until the 1970s.

Prominent architect Carl A. Darmer designed the Harmon Building on Pacific Avenue, used as a warehouse by F.S. Harmon & Company, a large furniture store with branches in Portland, Seattle and Spokane. Darmer also designed this flatiron-shaped (triangular) factory for the manufacture of furniture and mattresses. Particularly massive floors were built to support the heavy materials. A skybridge connected the two Harmon buildings (it was removed in 2000). In 1945 the company moved to another location. Sears Roebuck used the factory building as a warehouse from 1947 to 1953.

McGranahan Architects of Tacoma, with Miller Hull Architects of Seattle as the associated architect firm, designed the renovation of the two buildings for the university.