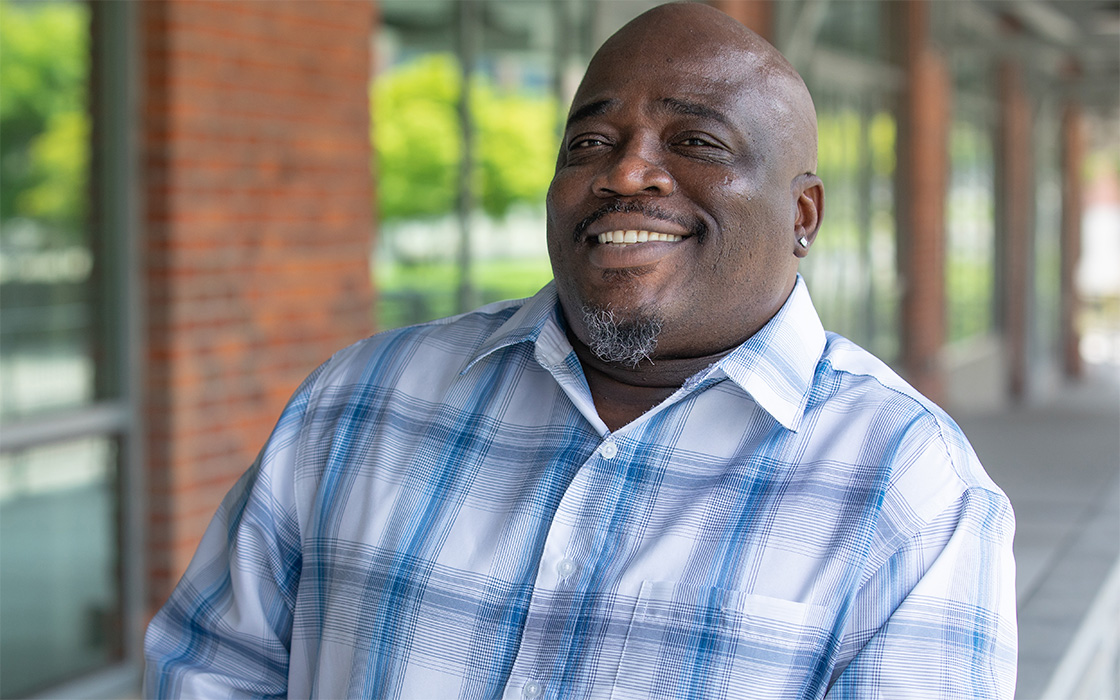 Andre Henderson: The Fork in the Road

Teetering on the brink, Navy veteran Andre Henderson recalled his mother’s words urging higher education, and took a path that turned his life around.

Andre Henderson knew something needed to change. He’d reached a crossroads, a fork in the road where the path he’d been on and the one he wanted to take, diverged. The then forty-something sat across the table from his lawyer in the jail’s visitation area. “I said, “Man, I’m tired of living like this. I’m tired of going back and forth to jail,’” said Henderson.

The lawyer looked his client in the eyes and said, “Well, if you were so tired of it, you wouldn’t do it.”

Just Wanted to Get Out

Henderson spent his childhood in St. Louis and Chicago. “My mother struggled as a single Black woman raising three kids but she always provided for us the best that she could.” he said. “She worked and took night classes for as long as I can remember.”

The family didn’t have a lot of money, but they did have relatives who lived close. “We had lots of family get togethers and to me, I had a good childhood, but we did struggle,” said Henderson. “I did see a lot of crime and I can remember people disappearing from the neighborhood. They were there one day and gone the next, they either died in the streets or went to prison.”

The teenage Henderson didn’t see college as an option. “I didn’t do well in high school,” he said. Still, continuing to live in St. Louis after graduation didn’t seem like a viable option. Henderson decided to join the military. “I just wanted to get out,” he said. Henderson served in the Navy as a Cryptologic Technician. “It was a really exciting job,” he said. “I had top secret security clearance and to even get that job meant I had to do well on the ASVAB (Armed Services Vocational Aptitude Battery).”

Henderson left the military in 1991, a year after being stationed at Naval Station Bremerton (now Naval Station Kitsap). “My first son was born not long after I got out of the Navy,” he said “I had no job and felt like a failure and that’s when I first started hard drugs, which carried on for thirty years.”

“One of the things growing up in St. Louis as a young man, one thing that we believed is that we would not live to see our twenties.”

This isn’t to say that Henderson didn’t try to stop doing drugs. “It’s a vicious cycle that comes with a lot of guilt and a lot of shame,” he said. Henderson worked, at one time as a mechanic and later at McDonald’s where he started the management program. “I still had my drug issues, even while I was working and raising my kids,” he said.

Life for Henderson took a dramatic turn in 2012. “I ended up homeless -- was really just out there in the streets doing all kinds of things, including committing crimes,” he said. “I got my first felony that year, at the age of 42.”

In this episode of Paw'd Defiance, the UW Tacoma podcast, Andre Henderson and his mother Renay discuss their experiences in higher education and why they decided to attend college. Mother and son talk about what it means to them to see each other succeed.

A few reckless words are all it takes to extinguish hope.

Fortunately, that’s not what happened with Andre Henderson.

“I looked at him, and, for the first time, I realized he believed that,” said Henderson. “That’s how he saw me, that’s how the court saw me and that’s how they were dealing with me. I knew at that point that I wasn’t going to get any help from them and that it had to be up to me to get what I needed.”

Upon release, Henderson went to a treatment facility. From there he got accepted into a transitional housing facility for veterans. “Things started lining up for me and I remembered my mother’s words, what she’d been telling me for years: ‘Son, you need higher education,’” said Henderson.

Henderson enrolled at Olympic College. “I wasn’t sure I belonged,” he said. “It had been thirty years since high school and I was intimidated.” Over time Henderson grew more comfortable and came to see school as something more than just “more school.”

“I started to learn things about myself, about the society I lived in,” he said. “I own all of my choices and experiences, but I found that there were things guiding me, things that were unseen, things that I didn’t know about and it was liberating to understand that.”

This knowledge opened up a whole new world for Henderson. “I started to sign up for things,” he said. “I co-founded a reentry collective for formerly incarcerated students at Olympic College and became part of the Black student union as well as student government.”

Henderson took that energy with him to UW Tacoma. “I just really started to feel empowered,” he said. Henderson joined the Formerly Incarcerated Student Association on campus and eventually became the organization’s president. He also helped organize a launch the Washington State Student Council on Reentry which works to inform elected officials on the challenges and needs of formerly incarcerated students. He got involved with student advisory councils and became part of the Global Honors Program where he spent this past year as the Student Leadership Council Co-Chair. Off campus, Henderson serves on two boards of directors and a board of commissioners.

Henderson graduates in June with a degree in social welfare. “I had an opportunity to turn my life around,” he said. “When I first started in college I was facing a lot of barriers and there were a lot of people who came alongside me and helped me out. When I saw the power of that advocacy that really ignited my passion for helping others.”

He may be graduating but that doesn’t mean Henderson is done. He’s applying to the Master of Social Work program at UW Tacoma. “School changed my life,” he said. “It’s important to me that I show my children that change is possible. People get stuck in ruts and sometimes they die there, but it doesn’t have to be this way.”

Andre Henderson is the recipient of the 2022 Governor's Student Civic Leadership Award. In this video, he recaps his experience as a formerly-incarcerated student and his journey to becoming a student leader.