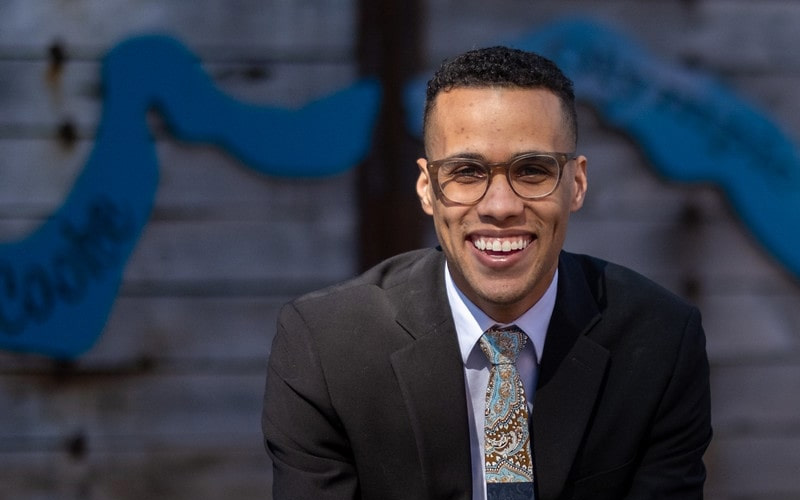 ASUWT President Andre Jimenez sees the pandemic as an opportunity to rethink the student experience at UW Tacoma.

June 2022 update since this story was originally published:

Andre Jimenez, '22, doesn’t have much time. “We’re leaving in July,” he said. The “we” in this statement is Jimenez, his wife and their three children. Jimenez graduates from UW Tacoma with a degree in law and policy on Monday, June 13. He’s expected to be in Princeton, New Jersey by the end of July. “There’s a mandatory summer program that I have to attend and it starts on August first,” said Jimenez.

Jimenez’s educational journey will continue at Princeton University. The university awarded him a full scholarship to pursue a master’s degree in public affairs. “I developed an affinity for the political and policy sides during the past year in my role as ASUWT President and through the courses in my major,” he said.

“I'm just really grateful for the opportunities to work with amazing students. In this role, I've been exposed to some of the best and brightest students on our campus. I think that our future is really bright.”

Law school might still be in Jimenez’s future but he will wait to make the decision until after he completes his master’s. “I feel that UW Tacoma really prepared me to go somewhere like Princeton,” he said. “This campus reflects the world and the communities that I want to serve, and, so, I feel like the experience I’ve had here is only going to enhance my ability to understand complex situations and to problem solve in a way that some of my colleagues at Princeton won’t be able to.”

Earing a college degree is a major achievement and not just for the person getting the degree. “I’ve been thinking a lot about the trajectory of our family,” said Jimenez. “I’m the son for formerly incarcerated parents and they’ll be at Commencement. I’m excited for what this means for my family moving forward, both for my parents, my siblings and my children. When I came back to college, I was the only one in my family pursuing higher education. Since then my brother has gone to community college and is working to become an EMT. My wife started at Tacoma Community College and I’ve been able to help them walk through the process. It’s that type of legacy building that I’m really passionate about and that I really care about.”

Andre Jimenez has been a student at UW Tacoma for more than a year, but he’s only been on campus once. “My entire UWT experience has been in a 2D Zoom environment,” he said. Jimenez’s story mirrors that of many other UW Tacoma students who have spent the past 18 months learning and experiencing college online.

Jimenez first visited campus in early summer. “I had to get a student ID,” he said. Jimenez needed the ID in order to pick up the keys to the ASUWT President’s office. “It was really interesting looking at a map, trying to find out where the University Y was and where campus security was,” he said. “I definitely felt like a fish out of water.”

There’s a tendency to put leaders on a pedestal. From this vantage it can be hard to understand what you’re seeing, which is why Jimenez’s experience and his willingness to talk about it is so refreshing. “Accessibility is a huge part of success in college and that can’t happen if you constantly feel lost,” he said.

Jimenez grew up in Tacoma. He attended Foss high school while also taking college courses at Tacoma Community College (TCC) through the Running Start program. Jimenez graduated from TCC in 2013 and decide to take a gap year. “That gap year turned into six years,” he said.

Jimenez is a first generation college student. His father worked for the U.S. Postal Service for 30 years. Jimenez's mother was a stay-at-home mom who raised three children -- all boys.

During that time Jimenez got married and started a family. He has three children ages five, three and one. Jimenez also launched a career at the local nonprofit Sound Outreach. The agency provides financial coaching and job training for Pierce County residents who live on a low or fixed-income.

Jimenez worked on the communications team and also helped raise money for the organization. “Each day I saw people who looked like me or who could have been my neighbors, and they just had this brokenness in their eyes,” he said. “They were being churned through systems that weren’t designed for their benefit.”

Jimenez decided to do something about what he was seeing. “I began looking to see how I could affect some of these systems, what I could do,” he said. This curiosity lead Jimenez to UW Tacoma and the Law and Policy major. “The beauty of the program is that it seamlessly integrates law and policy, and it does so in a way where you can see how both are necessary for social change,” he said.

Jimenez plans to pursue a joint Juris Doctorate (JD)/Master of Public Administration (MPA) degree. “I want to have the JD as a tool in my case, but I think my skill set and my interest are more geared toward being a policy analyst or an elected policy maker,” he said.

Rewind to 2013. Jimenez’s decision to take a break from school stemmed from a desire to find purpose. “I really didn’t know where my place was,” he said. “I didn’t have a sense of belonging, I didn’t know what I wanted to do.”

Jimenez’s work at Sound Outreach provided the spark, but a spark needs the right environment to become something else. “Education was the catalyst that allowed me to dream big,” he said. Jimenez started at UW Tacoma in the fall of 2020. Within a few months he was elected the ASUWT senator for the School of Interdisciplinary Arts & Sciences. He was also elected to co-chair the Student Leadership Council for the Global Honors program.

Jimenez enjoyed an almost Beatles-level of success during his first year as a UW Tacoma student. Among his achievements, Jimenez was named both a Dressel and Truman Scholar (the latter is a highly competitive national honor). He was also named a Commissioner on the City of Tacoma Human Right’s Commission. This past spring, he topped off his year by winning the ASUWT presidential election.

There’s a paternal — not paternalistic — side to Jimenez. He cares, but understands solutions come from listening and collaboration. This makes sense considering he’s both a father and an older brother. His story is unique and also very familiar. Like so many UW Tacoma students, Jimenez works full-time while attending classes. He may not know the physical campus very well, but he understands the people and the larger university mission. “I’m really focused on a holistic COVID-19 recovery,” he said. “We’re being offered this huge reset button. We have a chance to redefine normal because we know that normal didn’t work for large groups of students pre-pandemic and so I think that we have this golden opportunity to reset and redefine what we expect from our institution.”