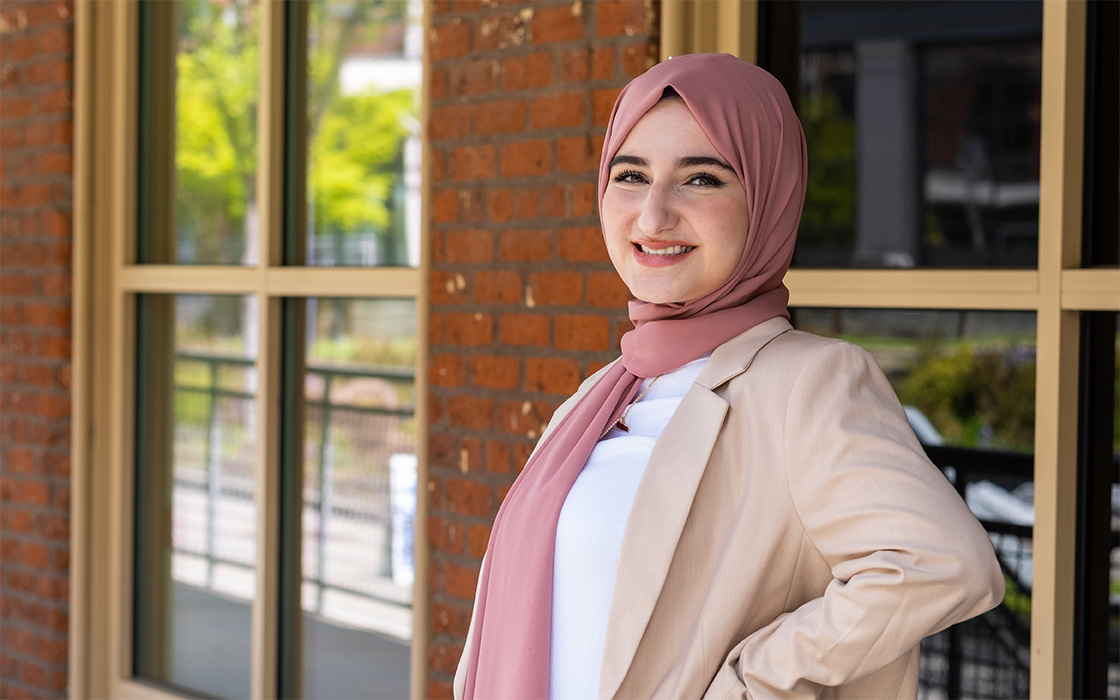 Bengisu Cicek: Getting to Campus

A monstrous commute and a pandemic didn’t curb Bengisu Cicek’s desire to take part in campus life, as a writer for The Ledger, an officer with ASUWT and president of the Muslim Student Association.

Leaves scatter in the bus’s wake. The blue and white behemoth rolls to a stop. A light rain freckles the ground. The bus stirs, exhales through a series of hisses and whooshes. A young woman dressed in a tan jacket, white undershirt and black blouse waits. She is wearing a salmon red hijab that serves as the only color on this dreary Pacific Northwest morning.

The door folds in on itself. The young woman steps onto the hot asphalt. Once inside she takes a seat, thankful for the bus’s air conditioning. It’s unseasonably hot. Outside, lawns are a desiccated and ghostly white.

The bus lurches forward, picks up speed before coming to rest again. The noises repeat, the door retracts. It goes like this for a while as the vehicle works its way through downtown Seattle before hopping onto I-5. Traffic on the interstate is light this afternoon. The speedometer reaches 60 miles-per-hour.

The woman in the salmon red hijab stares out the window at the cherry blossoms on Pacific Avenue. Sunshine warms her face. The woman removes a book from her bag. She has a test in the morning and plans to use this time studying.

The interstate is bottlenecked. Cars and trucks roll along at ten miles-per-hour. Brake lights illuminate the snow flurries. The woman settles in for what will most assuredly be a long bus ride. She has come prepared – food, water, books, laptop – all carefully stowed away. Still, she is eager to return home.

Born in Istanbul, Turkey, Cicek and her family came to the United States when she was still a small child. “Life was hard for us when we first moved to the United States,” said Cicek. “My father worked at a mall kiosk selling jewelry and did other odd jobs to support our family.”

The family eventually settled in Yakima. By that time, Cicek’s father had earned a doctorate degree. Her mother started nursing school while in Yakima. “She actually graduated around the same time that I finished high school,” said Cicek.

Graduating from high school is a big achievement. This moment marks a turning point in a young person’s life. They are on the cusp of adulthood. The moment is marked with joy over the accomplishment and optimism about the future. Cicek’s immediate future included UW Tacoma. The then-18-year-old started making plans for college life when she got some difficult news. “My parents decided to divorce,” she said.

Cicek, her mother and older brother moved to Bellevue. Her father stayed behind in Yakima. “My mother has been very resilient throughout the years and she has helped me become the person I am today,” said Cicek. “She has overcome so many barriers and shows that women can be in many areas of life, women can be divorced, women can be Muslim, and women can be nurses.”

Cicek spent a good deal of her time at campus just trying to get to campus. Cicek would often ride the bus from her home in Bellevue to Tacoma and back again. Morning classes meant catching an early bus to campus and then camping out at a coffee shop until class started. Evening classes required precision timing so as to avoid missing the last bus for the day. Rain, snow, sun, fall, winter, spring summer, the time of year or type of weather didn’t matter. If Cicek had class then chances are she would be on a bus.

Cicek started at UW Tacoma and planned to major in Politics, Philosophy, & Economics. “I decided to switch to Law & Policy,” she said. “I’m very into law, I want to become a lawyer, and we have a diverse number of classes at UW Tacoma concerning law.”

Human rights are an important issue for Cicek, one explored both in and out of the classroom. She took multiple courses with Associate Professor Ben Meiches, including a course on genocide. “I was already active in a student coalition called Free Uyghur Now that advocates for human rights,” said Cicek. “It was Dr. Darrah McCracken's internaional humanitarian law class that helped me understand why people commit human rights violations and why certain humanitarian aid doesn’t work. This motivated me to want to work with organizations and pursue a path in human rights.”

Involvement is a consistent theme in Cicek’s UW Tacoma story. A monstrous commute and a pandemic didn’t curb her desire to take part in campus life. Among other things, Cicek wrote for “The Ledger.” She was also active in the Muslim Student Association and served as the club’s president during her junior year.

Cicek held the position of legislative liaison for ASUWT. “I was able to testify and lobby on bills at the capitol in Olympia which taught me that I, as a student, and as a young person have a huge influence on changing how our state and how our country functions,” she said. Cicek’s position with ASUWT opened up doors. This experience helped her get an internship at the Washington, D.C. office of Senator Patty Murray.

Cicek has worked and gone to school. This year she’s helping fellow students in her role as Student Retention and Community Development Assistant at the Center for Equity and Inclusion. “I’m grateful for the opportunity to help others,” she said.

This particular journey is almost over. Bengisu Cicek is set to leave UW Tacoma. Commencement is her last stop. “I’m so grateful that I got accepted into UW Tacoma and that I chose to attend,” she said. “I believe I was able to leave a bigger, more impactful mark on the UW Tacoma campus than I would have been able to anywhere else.”