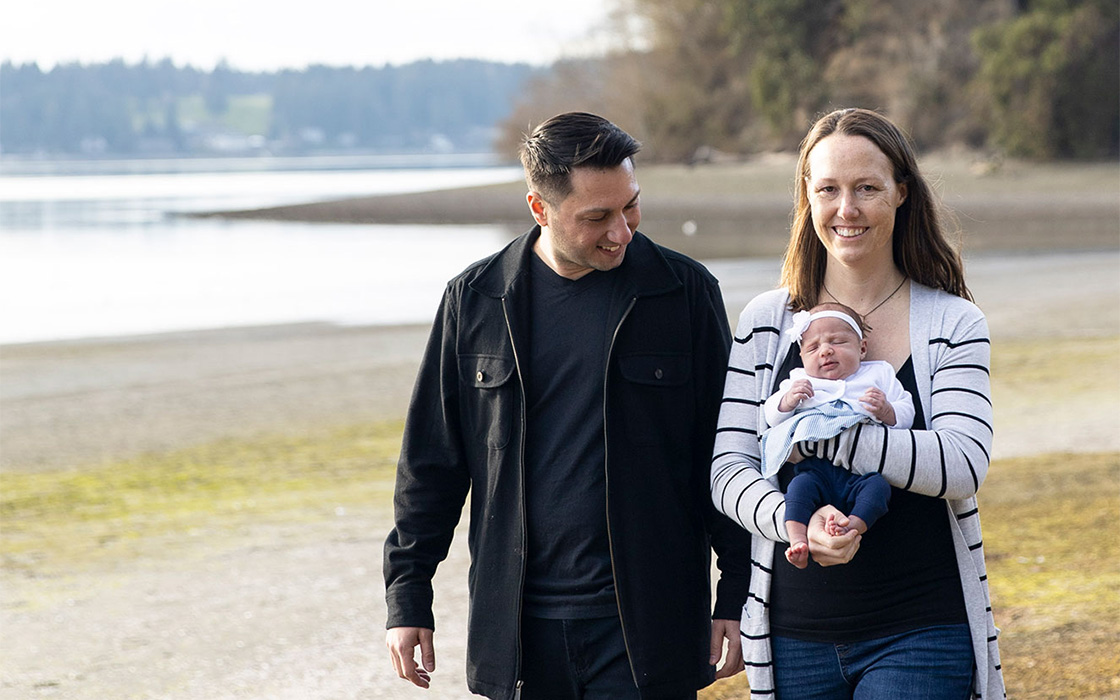 (In the photo above, Bridget Talebi is walking along the Puget Sound shoreline with her husband, Bobbak Talebi, and their daughter.)

Bridget Talebi was Bridget Mason when she attended UW Tacoma. She made her mark, playing a role in the creation of the campus's Giving Garden, working on staff in the Division of Science and Mathematics, receiving a Staff Association Distinguished Service Award in 2009, and working with Dr. Jim Gawel on his research into Spirit Lake at Mount St. Helens and Waughop Lake in Pierce County.

We've excerpted the profile of Bridget below.

As a high school student taking classes at Olympic College, Bridget Talebi, '05, hadn’t thought about a major or mapped out a career path — until a conversation with a friend changed everything.

That friend pushed her to apply for a position through the Washington Conservation Corps (WCC), an environmental AmeriCorps program that provides hands-on experience and training to young adults across the state. Talebi hesitated, assuming she needed a stronger science background. But she landed the role at an environmental lab, analyzing water samples to monitor the health of Washington’s rivers. Today, some 20 years later, she’s the director of the WCC.

With an education award for her AmeriCorps service, Talebi finished her degree at UW Tacoma while working full time at the WCC in Olympia. She chose the interdisciplinary urban studies major because, she says, “I was looking for programs that would accommodate somebody who’s already professionally where they wanted to end up.” What she learned in class — whether in environmental policy, geographic information systems (GIS) or nonprofit management — she could easily put into practice in her job.

Today, Talebi is passionate about introducing young people to career paths they might not have considered, from wildland firefighting to habitat restoration.

Most of the WCC’s 285 members serve on crews stationed across the state. They build trails in parks, work on restoration projects like removing invasive plants and planting native species, and respond to disasters, such as wildfires and the recent floods in Skagit County.

Talebi wants to remind everyone — WCC members and new students alike — that “it’s OK to not have it all figured out. Take that first class. I stumbled upon my passion — and it wouldn’t have happened if I didn’t just get started.”

Part of ASUWT's goals for the 2022-2023 school year is to create community and campus partnerships to provide affordable student housing for University of Washington Tacoma students. This article will serve as a living document detailing the progress in meeting that goal.