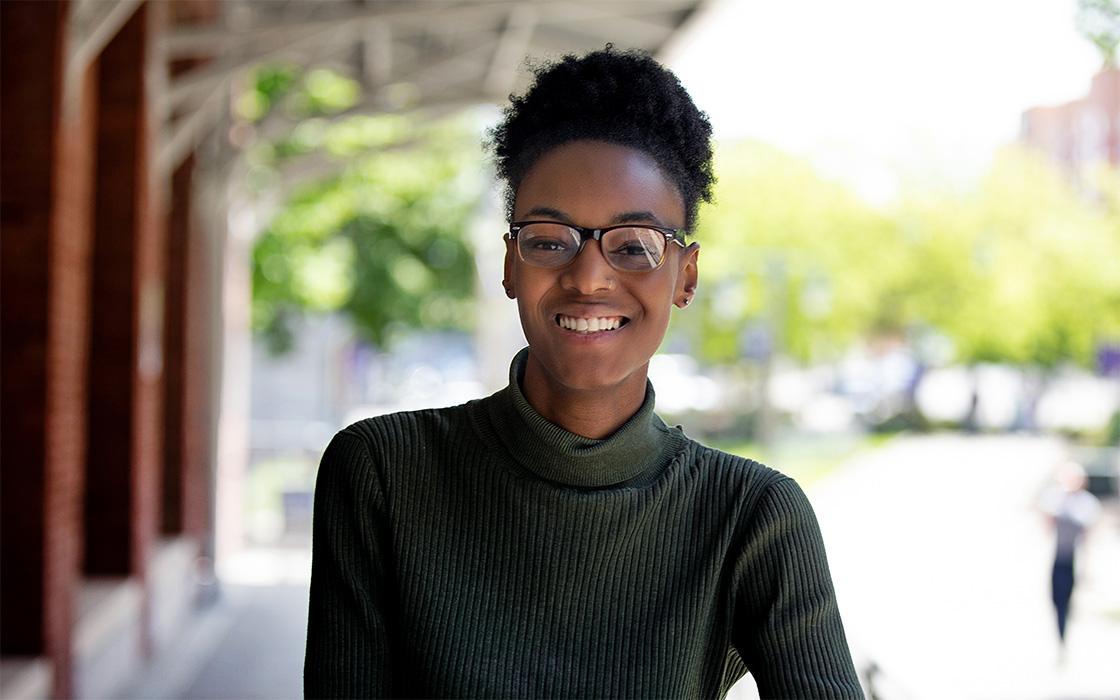 Chanelle Allen: Getting In By Giving Back

Being a woman of color in STEM has been challenging for Chanelle Allen, but being able to help others find their way in keeps her going.

Chanelle Allen remembers her childhood in Kent being filled with art and creativity. She liked to draw and loved design. By the time she reached eighth grade, she had dreams of wanting to be an architect. “That was pretty big for me,” she said. “I always had a creative mind and spirit, so art was the number one thing for me.”

One of six siblings, Chanelle and her twin sister Careese, now 21 years old, were born prematurely and it left Careese with cerebral palsy, while Chanelle has a generalized learning disability and a speech disorder. None of it seems to have slowed Chanelle down. She was given an individualized education plan during her years in K-12 to help her navigate some of the difficulties. “Being able to jump over the hurdles I’ve faced is really surreal to me in a way – but I’ve just worked harder,” she said.

Allen’s hard work led to Green River College after high school, where she became a member of the Phi Theta Kappa Honor Society. She felt she’d defined her own path and saw success in her future, but that all changed when she began to consider what was required to become an architect. “I did a complete 180,” she said. “I didn’t want to become an architect anymore,” Allen said. “The coursework was very rigorous and I’d need to go to school for five more years. I felt like I needed to do a switch.”

Allen kept in mind that creativity was key, but she also knew there were a lot of ways to apply it. “I really felt like information technology was a very diverse field,” she said. “You can almost do anything you want to. Majoring in it was the best choice for me.” Allen took her first Python Programming class at Green River College and said it opened up a whole new world to her. “It was a lot of fun and it just made me realize that there was so much I could do,” she said.

Allen chose UW Tacoma to continue her education because she knew she wanted the UW experience at a smaller campus. “It was the right choice because I knew I could get help when needed,” she said. “Going into my major, I was really able to apply my knowledge from Green River and build on it. It helped me understand what I wanted to do after I graduate.”

Allen earned a scholarship from the School of Engineering & Technology for her dedication to her major and the extracurricular work she pursued. “I put in a lot of work and I was passionate about it,” she said. Her recognition by the campus is something in which she takes pride. As Allen herself will tell you, it’s not about what she gets, but what she can give.

With her new career path underway, and excited about the opportunities that emerged, Allen became a mentor to female high school students. She joined a Seattle non-profit organization called STEM Paths Innovation Network, or SPIN Girls. Allen provides mentoring and leadership to tenth grade girls who would like to get an education in science, technology, engineering or mathematics.

“It has been a very, very rewarding experience,” Allen said. “I’ve been able to apply what I have learned over several years and to offer support and guidance – to be an advocate for students. Being a tenth grader is hard, I know. As mentors with SPIN, we do workshops, field days and lab days.”

Allen said one of the highlights happened recently when the SPIN girls were given the chance to join employees of Meta (Facebook) for a Zoom conference and join a panel of female engineers, scientists and researchers. “They were exposed to what it would feel like to be a woman in STEM,” she said. “It was pretty awesome.”

In addition to her classes and mentoring, Allen is a digital and web intern for the Pike Place Market Foundation in Seattle. “We help the Seattle community find social services and resources like food banks, job networks and healthcare,” she said. “I’m aiding in redesigning our website through applying user-experience design and editing content of web pages.”

The internship has helped her further define her goals upon graduation this June. Allen wants to get into user experience or user interface design or product management. “In one of my classes, I built an app with a team of four other students for the Tukwila Community Center,” she said. Allen said that the app is not yet done, but what has been completed is working well.

“It helped me decide that working on user experience is really the direction I want to go,” she said. In the past year, she became a part of a registered student organization at UW’s Seattle campus called Women in User Experience (WiUX) as a marketing officer. “We team up together supporting women who want to go into the design and technology field,” Allen said. “Being involved in the extracurriculars helped me explore all my options. So, I wouldn’t see myself going into anything else. I’m interested in project management as well, but my creative side will never go away.”

Allen knows the challenges will continue – but she’s also prepared to handle them. “Being a black female student in STEM specifically is challenging,” she said. “It’s scary and there were times when I almost wanted to give up because I felt unsupported in the STEM field — but that’s when I decided to give back my support to other students.”

Allen said that by offering her support to others she felt she could be more a part of her chosen field. “It’s a rewarding and challenging experience and knowing that I am persevering is eye opening for me and for others. It keeps me going.”

Call it getting in by giving back – perhaps that’s the lesson that Allen learned most. “I have five siblings and they all tell me they look up to me,” she said.