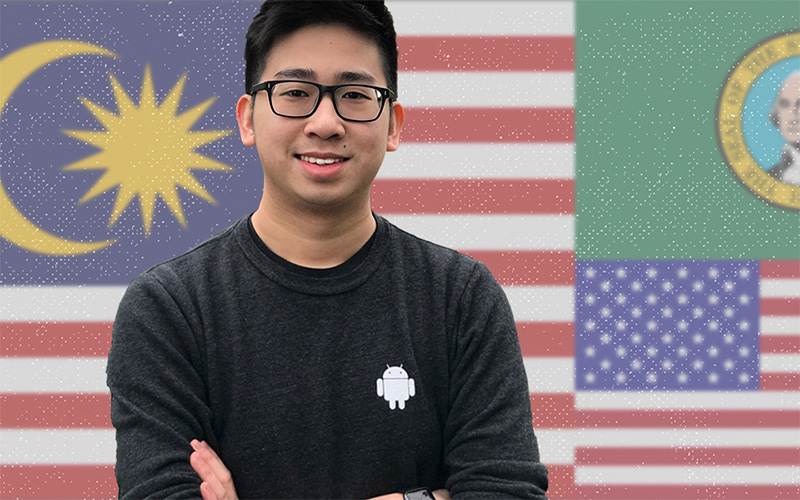 Christopher Sim's journey took him from Malaysia to UW Tacoma.

It’s a strange feeling when you realize the place you’re from isn’t where you belong. Christopher Sim grew up in Malaysia, but it never felt like home. “I just felt like I didn’t fit in,” he said. “In Malaysia, if you want to excel then you become a lawyer or a doctor.”

Sim’s dual interests in technology and design made it difficult to imagine a future where he could be successful. So, he decided to make a change. “I always wanted to come to the U.S.,” he said. “It’s sort of been ingrained in me since I was a child.”

Sim moved to California where he completed an associate’s degree. He’d initially planned to stay in state to pursue a computer science degree. Sim has cousins in California, and they all were students in the University of California system. “I felt a lot of pressure to do what they did,” he said.

Instead, Sim opted to look elsewhere. His journey took him north. “I was initially thinking about UW Seattle but then I heard the Tacoma campus offered classes that intersect with design,” he said. “So it was that and the incredibly diverse student body that really attracted me.”

By this time Sim had been in the United States for three years. His journey had taken him thousands of miles from where he started but, he’d finally found what he was looking for. “Coming here has really been a breath of fresh air,” said Sim. “Everyone has been really accepting and I found peers that are just as enthusiastic as I am about working in a creative field.”

Sim credits different faculty for helping make campus feel like a home. “Dr. Emma Rose, Dr. Randy Nichols and Dr. Divya McMillin were all an integral part of my experience,” said Sim. When not in the classroom, Sim kept busy with the User Experience Design Club, which he helped found. Club members designed the Global Innovation and Design Lab’s website. Sim has been active in the lab and received GID Awards in fall 2019, winter 2020 and again in spring 2020. The award goes to juniors and seniors to support their participation in community design thinking.

This past year Sim served as an undergraduate research assistant for Project EMAR [Ecological Momentary Assessment Robot]. Rose, along with the UW’s Elin Björling and Maya Cakmak, are developing a robot to measure stress in teens. The project solicits feedback from different groups including teens. Sim’s involvement points to a larger interest. “I want to be involved with designing technology that is more accessible and inclusive,” he said.

Recently, Sim became the first in his immediate family to graduate from college. Earning his degree in communication is a huge milestone, one that typically comes with challenges. “My dad moved overseas to find work after the 2008 financial crash,” said Sim. “I was 12 at the time and it was hard, but I understood why he had to do it.”

Sim’s mother lives in Malaysia. His father is still abroad. Sim’s younger brother lives with him and just finished up at Bellevue College. The entire family tuned in to watch Chris receive his degree virtually. With any luck they’ll be able to attend his next graduation. Sim has been accepted into the Master of Human Centered Design and Engineering at UW in Seattle and starts classes in the fall.