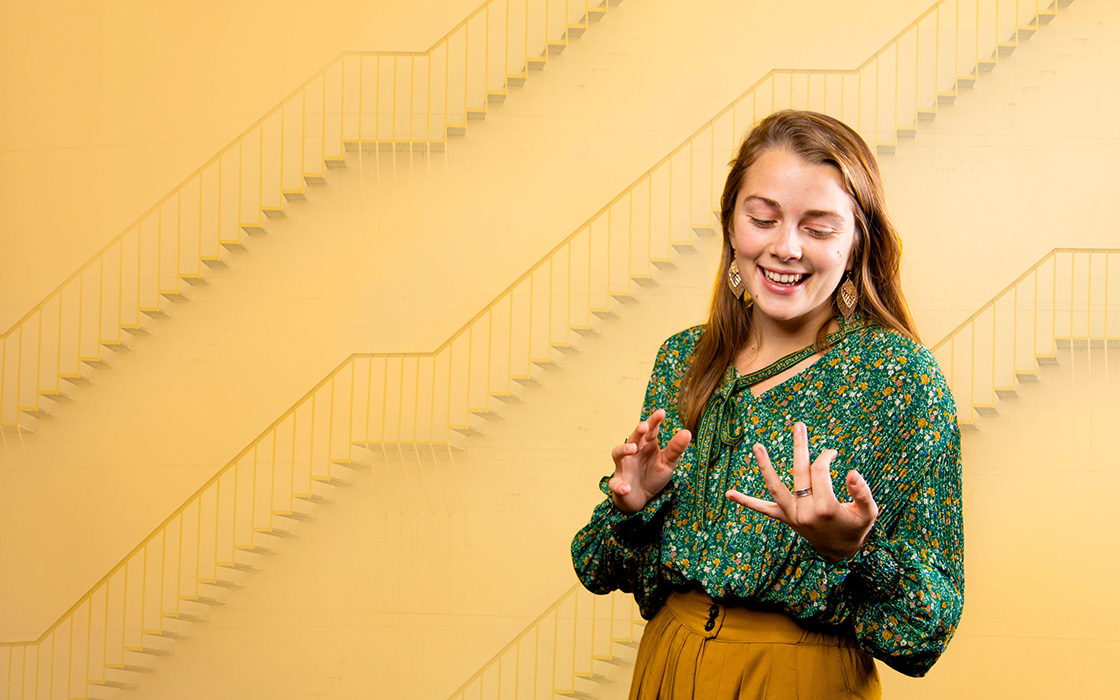 Abigail Lawson, '21, is helping others in her role as the director of Tacoma's guaranteed income program.

Think of a word with a negative connotation. Chances are you can use that word(s) to describe the pandemic. Devastating — yes. Heartbreaking — yes. Painful — yes. Humanity, it seems, is in a rut when it comes to COVID-19. Try as we might to break free, we end up spinning our wheels.

Economic hardship is nothing new. The most recent statistics show that 11.4% of the U.S. population lives in poverty. In 2010 the percentage stood at 15.1%. In 2000 the percentage was 11.3%. The percentage changes from year to year but the fact remains that people both in this country and around the world have been and continue to struggle to get by.

Economic hardship may be nothing new, but the widespread interest in the topic just might be. The pandemic wrought a physical, mental, emotional and financial toll. The pain and suffering we have witnessed these past couple of years opened our eyes to the struggles many face on a day-to-day basis. We see now the impact of not having access to affordable childcare or of working a low-wage job. Many people in the U. S. and around the world are just getting by and could be financially ruined by even a small personal crisis.

From this reality came a conversation about Universal Basic Income (UBI). The UBI concept has been around for centuries. It came to prominence during the last presidential election cycle when then candidate Andrew Yang proposed giving every American over age eighteen $1,000 a month.

UBIs have a history in the United States. Since 1982 the Alaska Permanent Fund has been distributing checks to residents. The actual amount is tied to oil revenues. The more revenue, the bigger the check. In 2019 the City of Stockton started a two-year UBI program that distributed $500 a month to randomly selected residents, no strings attached. Programs such as the one run by Stockton are meant to address economic inequality by providing financial assistance.

UW Tacoma alumna Abigail Lawson volunteered for Yang’s campaign in part because of his UBI plan. Lawson graduated in June 2021 and now serves as the director of Growing Resilience in Tacoma (GRIT). The program is a first-of-its-kind in Tacoma “guaranteed income demonstration.” “We are gifting $500 a month for the next twelve months to 110 Tacoma residents,” said Lawson.

GRIT is not considered Universal Basic Income. Unlike a UBI program, GRIT and other guaranteed income (GI) programs involve a selective process that includes an application and criteria people must meet in order to qualify. Among them, GRIT participants must meet United Way’s ALICE (Asset Limited, Income Constrained while Employed) criteria. The annual income in ALICE households is between 100% and 200% of poverty level.

Born in Utah, Lawson moved to the San Juan Islands then to Maui before settling with her family on Vashon Island. “Both of my parents lost their jobs in the 2008 recession,” she said. “We moved to places where there were employment opportunities.”

Lawson graduated from Vashon Island High School in 2018. She decided to take the next year-and-a-half off from school to work and to travel. “I went to Europe and parts of South America,” said Lawson. “I also did some work for a video production company.”

Lawson started at UW Tacoma in the winter of 2020. She had been a Running Start student at Tacoma Community College and came to campus as a senior. When it came time to choose a major, Lawson decided on Politics, Philosophy and Economics with a specialization in economics. “I’d always been interested in political science and I was drawn to this idea of thinking about how to think, specifically around economic issues and how they impact individuals and communities.”

The Board Governance course through the Milgard School of Business offered Lawson a unique experience. The two-quarter class allows students to learn the concepts and theories behind board governance both in the classroom and in the field through internships with local nonprofits. During the second quarter students work with their organization on a project that will benefit both parties. Lawson took the course and ended up getting paired with the United Way of Pierce County (UWPC). “I knew about the United Way and really respected the work they did, especially how they serve as a conduit within the community,” she said.

Lawson started attending UWPC board meetings. It’s here that she first learned about the GRIT program. “I was flipping through the minutes of past meetings and noticed that Mayor Woodards had asked them [the UWPC board] to design and implement a guaranteed income plan,” said Lawson. “The concept of a guaranteed income is one of the reasons I got a degree in economics. It’s a really beautiful, progressive policy that can remind people they have inherent worth that doesn’t depend on whether they’re clocking in or clocking out.”

During the next few months Lawson learned as much as she could about GRIT. She started attending meetings about the program and talking to everyone involved. “This slowly morphed into me leading benefit analysis work,” said Lawson. “We needed to do this analysis to see if they money we’d be gifting people would impact their benefits eligibility in other areas.”

Lawson’s commitment to the project attracted attention. When her internship ended the UWPC kept her on in a support staff role. Soon after Lawson received a text message from the United Way of Pierce County’s then-Vice President of Community Impact Norinda Rosario Yancy. “She asked me to apply for the GRIT director position,” said Lawson.

An excited and nervous Lawson reached out to UW Tacoma part-time instructor Kristina Meyer for guidance. “She [Meyer] was so helpful,” said Lawson. “She helped me with my cover letter and to revamp my resume.” Lawson applied and went through two rounds of interviews before finally being offered the position.

"To restore truth to the idea of the American dream for working families, we must give people what they need to be successful. If we are going to effectively eradicate inequity in Tacoma or in any city across America, then we must look at all of the conditions that impact our residents. This includes economic conditions. That is why I am excited to join this group in exploring options for providing guaranteed income locally,"
—— Tacoma Mayor Victoria Woodards, addressing Mayors for a Guaranteed Income

The program is a collaboration between the City of Tacoma, the United Way of Pierce County and Mayors for a Guaranteed Income (MGI). MGI provided $600,000 to fund the project. In addition to getting GRIT up and running, Lawson has spent the past few months onboarding participants. “That means having one-on-one conversations with the 110 people who were selected, sitting down with them and answering any questions they may have,” she said.

GRIT is also a research study. Data on spending by participants will be collected and they will be interviewed on a regular basis to get a sense of how they’re doing and whether the additional funds are making a difference in their lives. “What we’re trying to do, one of our main goals, is to change the narrative on deservedness, on what poverty looks like,” said Lawson. “The information we collect will be used in a report that we hope to take to legislators and push for broader scale implementation of something like GRIT.”

When you think about it, $500 a month in extra cash is a lot for most people. Put another way, that’s an additional $6,000 a year. “People are struggling to close the gap to meet their basic needs,” said Lawson. “This isn’t enough money for someone to quit their job, but it is enough to help pay the rent or buy a new pair of rain boots for their kid or go to the pumpkin patch at Halloween without having to work more hours to make up the difference.”

GRIT ends after a year. Lawson isn’t sure what she’ll do next. However, she does have a general direction. “I want to be of service, that’s what’s important to me,” she said.