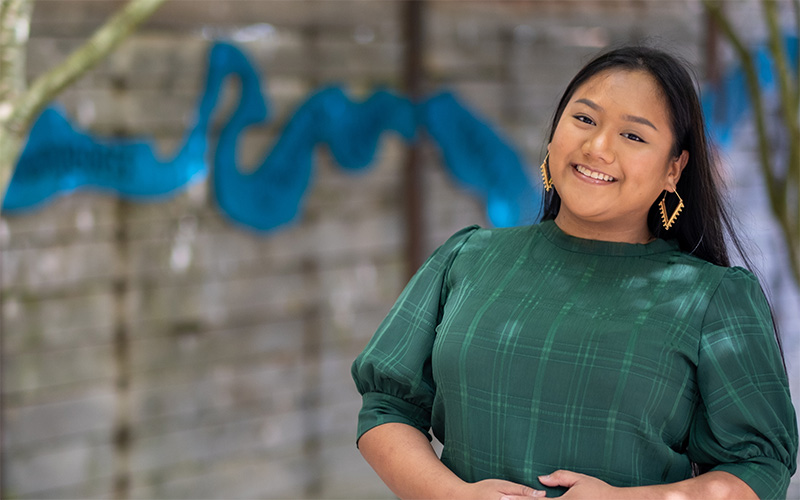 Her mother, her family, herself – these three things inspired Paola Jean Caguiat Chua to pursue a degree in biomedical sciences. Along the way, she helped define the first-gen experience for future generations of students at UW Tacoma.

From an early age, Paola Jean Caguiat Chua knew she wanted to work in the medical field. There is no one reason for this, there are several. Chua’s mother worked as a nurse, first in the Philippines and later in Saudi Arabia. “I grew up with a single mom, so sometimes she’d have to bring me with her to the hospital,” said Chua.

And then there was family. Chua has a large extended family that numbers close to forty people. With a group this size, Chua says it felt like someone was always dealing with some kind of ailment. “There was never a time in my life where a grandma or some other relative wasn’t suffering with a condition,” she said.

Finally, Chua describes her young self as “sickly.” “I had asthma,” she said. “I was also kind of clumsy and would often injure myself.”

Chua is the second of four siblings. The family has a close relationship, but hasn’t always been close geographically. Chua’s mother took a nursing job in Saudi Arabia that paid better. Chua and her siblings lived with their grandparents during this time.

Chua’s mother met someone while in Saudi Arabia. He was an American serving overseas in the U.S. Air Force. The pair met and eventually started dating. They later married and moved to the Pacific Northwest. Chua and her siblings followed.

A 13-year-old Chua arrived in the United States in 2012. “School had already started, so I didn’t really have time to adjust,” she said. Chua had been a top ten student back in the Philippines. She had already completed high school-level courses, but that didn’t matter. “I ended up being placed in eighth grade and doing work that I’d already done before,” she said.

Undeterred, Chua set about making a goal for herself of attending college. Chua’s mom went to nursing school in the Philippines but few in her extended family continued on into higher education. “I’d say only a handful have graduated college,” she said. “My great-grandpa only finished fourth grade and he wanted for everyone in the family to earn a degree.”

Chua started at UW Tacoma in the fall of 2017. At first, she came to classes then returned to her home in Puyallup. That started to change near the end of her first year. Chua worked at the Office of Student Engagement. Back then, Chua shared her workspace with what is now the Office of First Generation Initiatives (OFGI). She started chatting with students in the club. “There were a lot of other immigrant first gen students who would come by, so I felt like I was at home,” said Chua.

Chua is part of the team that pushed to create the Office of First Generation Initiatives. She currently works as operations assistant for the OFGI. “Most of what I do now is create events and programming,” she said.

In 2019, Chua served as the lead research assistant on Associate Professor Christine Stevens’ project that looked at the potential need for culturally relevant foods at the campus pantry. “We asked participants who often visited pantries in Pierce County what foods they were lacking and what kinds of foods we could offer to better serve the community,” said Chua. “A lot of students on campus come from different backgrounds and sometimes couldn’t find a food they would work with.”

Chua’s interest in medicine has shifted somewhat. She’d originally thought about becoming a doctor but is now interested in doing lab work. “Right now my skills are not there just because the pandemic kept me out of a lab for a whole year,” she said. Chua hopes to intern at a lab this summer. From there she plans to work for a few years before returning to pursue an advanced degree in the field of forensic science.