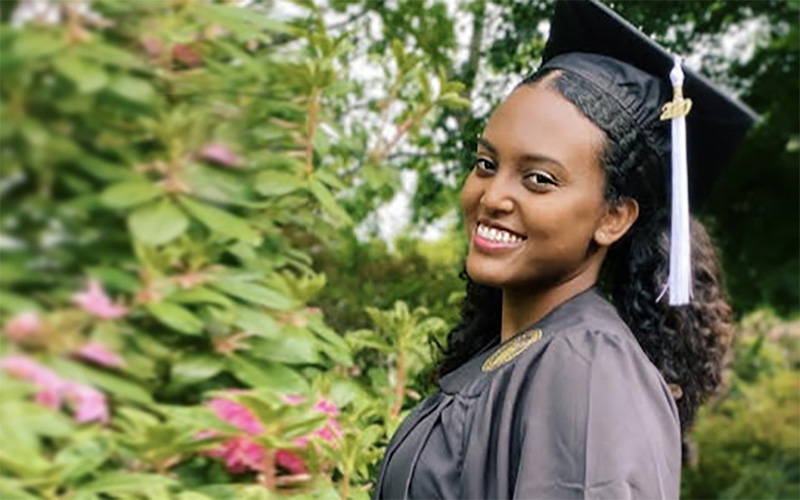 Alumna Ayda Kedirkhan wants to change the world, one design at a time.

Immigrants to the United States face many challenges. There can be language barriers, fewer job opportunities and difficulties adjusting to a new culture. That’s why Ayda Kedirkhan, ’20, is trying to make the U.S. a more accessible place, for her family and for generations to come.

Kedirkhan is a first-generation UW Tacoma alumna. “I came here when I was 10, from Ethiopia,” she said. “It was a difficult adjustment.” The relationships she made growing up in the SeaTac area with other immigrant families helped her become accustomed to the region.

Growing up, Kedirkhan found that she really enjoyed making things. “I liked the idea of being able to create something that doesn't exist or make things that already exist better,” she said. Kedirkhan took a class in graphic design in high school but wasn’t enamored by merely the aesthetics of design. She wanted to create something with meaning, something that could help people. Kedirkhan thought about her parents and the language barriers they faced.

Kedirkhan says that ever since she was young, especially since coming to the U.S., she has had to design something for her parents or her family. Kedirkhan would design workspaces and desk setups for her family to improve workflow. She designed personal finance budgeting sheets with better readability that were more user-friendly for her parents.

Kedirkhan’s career path had always been intentionally geared towards STEM-related fields. “Here in SeaTac, we don't really have as many opportunities to go outside of what's already predetermined for us,” she said. “As an immigrant and a first-generation college student, I had always been told by community members to do what will give me and my family job security, so it was difficult for me to inquire into creative fields."

Kedirkhan’s interests brought her to UW Tacoma. While she attended UW Tacoma, Kedirkhan worked on Project EMAR. The National Science Foundation-funded project aims to design a robot that can measure stress in teens. “I worked as part of the web design team responsible for persona creation, information architecture, user interface, and visual design,” said Kedirkhan.

The competitive program, offered by the Institute for Innovation & Global Engagement, provides a financial stipend, academic credit and the opportunity to work on two to five community design projects during the quarter.

In addition, awardees are encouraged to take on their own design projects.

Kedirkhan conducted a student-led project, "Designing for a BIPOC-inclusive Minor in Innovation and Design." She gathered student data and developed a plan to ensure the inclusivity of UW Tacoma's new innovation and design minor.

She also spent time with the Global Innovation and Design Lab (GID Lab). According to its founder, Dr. Divya McMillin, GID Lab’s vision is to create “a world of ethical and creative problem solvers” and to “create the conditions for inclusive innovation.” The lab is a member of the Design Justice Network, a collective that follows a set of principles in order to achieve its goal of creating design processes that center around people who are often otherwise marginalized by design. GID Lab and the Design Justice Network have standards and objectives that are extensions of Kedirkhan’s own. In the context of the lab and the network, she stayed accountable in working toward her desire to create user-oriented designs.

Kedirkhan recently graduated from UW Tacoma with a communication degree. She is optimistic for what the future will hold. Kedirkhan really wants to continue on with the knowledge she gained from the GID Lab and bring it back to her community. “That is my ultimate goal, to learn as much as I can, and that's through employment and also through learning more about UX design and then bringing it back to my community here,” she said.

UW Tacoma alumna Joy Chang served as a medic in the army, an emergency room nurse at Tacoma General and now works as a nurse practitioner in a private practice.

The Best She Can Be

Alumna Chelsi Johnson took the strategic communications skills she learned at UW Tacoma to the D.C. National Guard and the Department of Defense.

UW Tacoma alumna Christian Bell is using skills she honed at UW Tacoma to help stop the spread of COVID in Pierce County.