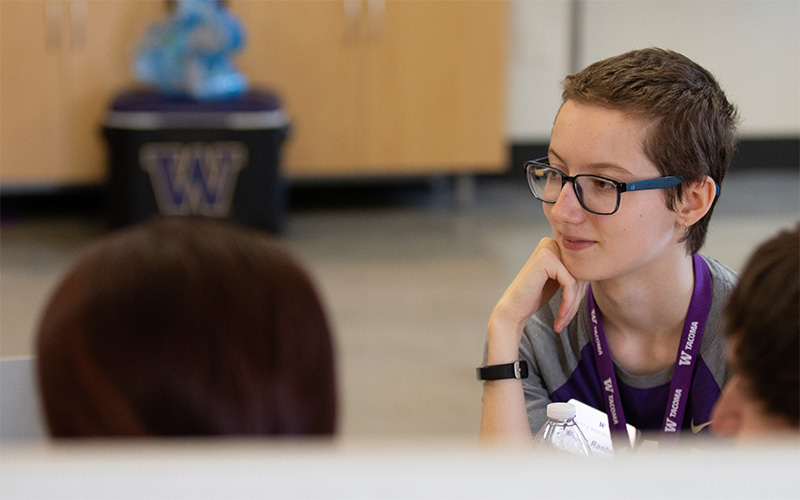 Max Raeburn’s experience as a student leader was transformative, even through the course of the pandemic.

When Max Raeburn first came to UW Tacoma in their freshman year of college, it was with a sense of disappointment. After a rejection from their dream school, they chose to enroll as a history major. “As I took classes, I realized that the history I most enjoyed was the history of struggle, of oppression and overcoming oppression, and what those histories mean for the present and the future. So I switched to the Ethnic, Gender & Labor Studies major, because I felt like it had more of a focus on history as well as the implications of what that history meant, and the overarching patterns that you can see,” they said.

Raeburn was shy and insecure at the beginning of their academic career, unsure of their ability and their future. But after they got a job as a Pack Advisor (a peer-to-peer student advising program), things changed radically. “I got so much more confident. And when I later transitioned into being a writing tutor and a Peer Success Mentor, that was the avenue that helped me figure out what I wanted to do for the rest of my life,” said Raeburn. “I feel strongly that student affairs is where I belong and where I shine through. I really like being able to meet with different students and help them with things I’ve struggled with, and to help them on their paths. I’m actually really sad that I’m graduating, because it’s been one of the best jobs that I’ve had. I feel like I’m doing something important.”

The transition to online school due to the pandemic had a significant impact on Raeburn’s last two years at UW Tacoma. “I’ve always struggled with motivation issues, and with online classes it’s difficult to reconcile that they’re real and that they exist when you don’t have to go there physically,” they admitted. Raeburn had to withdraw from classes when the pandemic first hit and was shocked by how supportive the staff and faculty were of that decision, and in their transition back the following autumn.

“They really made an effort to let students know that it was okay, and I was actually a part of that effort as a peer success mentor, so I was lucky. I felt very supported. When I came back in the fall, I had a plan in place and accommodations from the office of Disability Resources for Students. Things have been a little bit easier, but I have to make sure I communicate with my professors, and some of the things I struggle with they can’t accommodate.”

Raeburn’s experience as a queer and transgender student on the UW Tacoma campus has been an interesting one. Their position as a student leader helped them to gain the confidence to start coming out more publicly, and to be more assertive about their pronouns. “I started to fully embody myself as nonbinary,” they said, “but it can be really difficult. Especially now over Zoom, where you aren’t in a space to keep pushing people.”

Raeburn says that there are some students and faculty who have been exceptionally helpful to them in this struggle. “One of my current professors has corrected students twice now who have used my incorrect pronouns, and it's really nice to have someone who is willing to do that work for you, because I think that's the most exhausting part of being misgendered, is having to take that extra step and be like ‘you’re doing it again.’” They said that it’s difficult to build the confidence to speak up, and that many other transgender people may not be able to self-advocate.

After graduation Raeburn hopes to stay in education, in a student advising role of some kind. They’re considering graduate work in the future, and for now has their sights set on AmeriCorps: “I’ve been looking at mostly education positions. I want to start working with some younger learners as well, since I’m still deciding what path I want to take, so I’m applying for college positions as well as high school and preschool positions.” They have some experience working with children and young learners in the past, having worked with UW Tacoma’s Math-Science Leadership Program over Zoom last summer, teaching kids from the Tacoma area about STEM and environmental justice.

Raeburn says that running the program over Zoom presented unique barriers and challenges. “It was difficult to engage students over video and to get them to come regularly. But we had a lot of guest speakers, and we got to talk about ways environmental justice can play out in your life and some things they could do at home, like composting or making art about the environment.” Despite the difficulties of remote teaching, Raeburn says that the program was a wonderful experience. They plan to apply the leadership skills they learned there when they join AmeriCorps.

When Raeburn graduates this summer with an Ethnic Gender & Labor Studies B.A. and an American Indian Studies minor, they will look back fondly on their time at UW Tacoma, not as a halfhearted experience at a second-choice school, but as a life-changing and empowering experience. They are especially proud of how their role as a student leader has transformed them. “I was kind of going through my degree, knowing that I was learning something that I was passionate about but unsure of where I wanted to use it or how I would apply it, and now I feel very confident that I want to stay in the college setting and make sure that students who are coming to college know that there are people supporting them.”