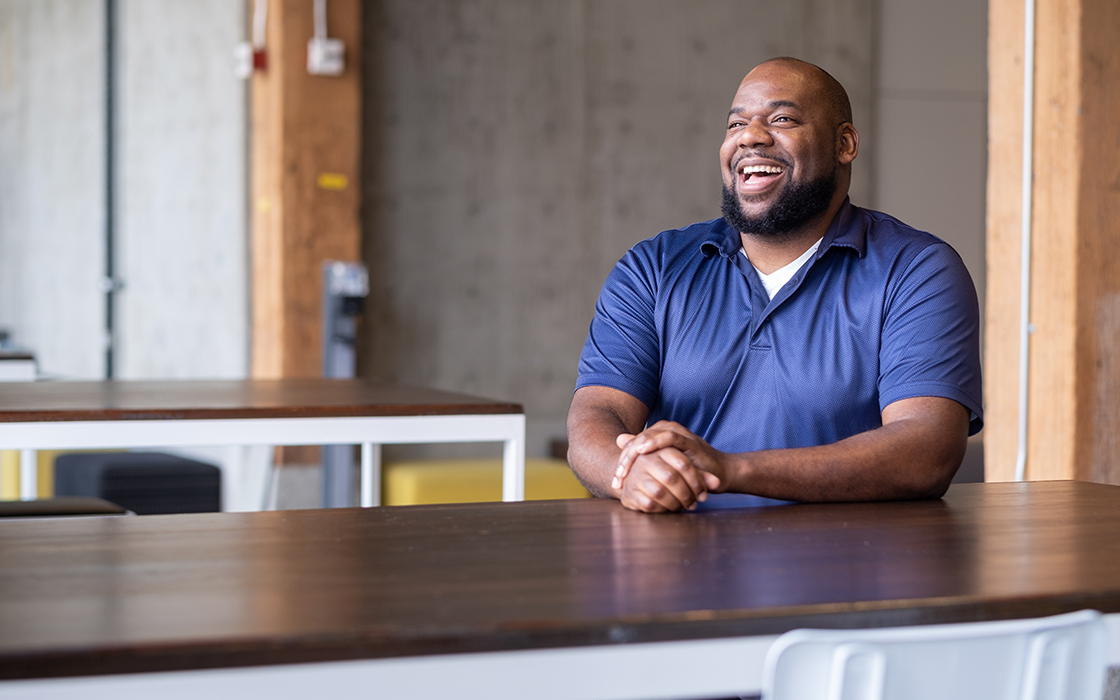 Alumnus Michael Jordan, '14, is using the skills he honed at UW Tacoma to help Black-owned businesses in Pierce County.

Michael Jordan says that he teaches businesses “how to cook.” Through his company, Clarity Consulting, which he started in 2020, the UW Tacoma alumnus specializes in the growth of Black-owned businesses.

Jordan consults with Pierce County business owners using skills he honed while working on a degree in Politics, Philosophy, and Economics (PPE) at UW Tacoma. “You can follow recipes and know two or three good recipes, but you don’t know how to cook,” Jordan said. “But if you know how to cook, then you can adapt recipes and get the outcome that you want.”

Jordan says he teaches companies “cooking” principles to show the connection between business principles, core economic principles, cultural issues and relationships with both customers and employees. “I help businesses and organizations look at how they can support equity in their own businesses, the way their company impacts the employees they already have, as well as the customers they serve,” he said.

Jordan’s creativity is a life-long pursuit. His consulting work is an outgrowth of his experience as a professional photographer, as well as the result of a number of life events, including his time at UW Tacoma. “I knew I wanted to pursue business,” he said. “I’ve always been kind of a puzzle person and enjoyed looking outside the box, looking at patterns.”

While at UW Tacoma, Jordan worked as a polysomnographic technologist — a sleep lab technician on the night shift. “We had to look at wavy lines and use them to understand what was happening while people slept,” he said. Jordan said that combination of inquisitiveness, creativity and discovering patterns, along with his studies in economics, had a profound impact on what he wanted to do in business once he got his degree.

The Pieces Come Together

Jordan grew up in the Hilltop neighborhood of Tacoma. His parents struggled to make ends meet. Jordan and his siblings received free or reduced lunch all through school and lived next door to a house that was the target of a drive-by shooting. Despite all of this, his parents worked to keep their home life rich and joyful. “School was important and learning and understanding were important,” he said.

Learning didn’t just take place in school. “You got supreme debate skills because there are five other opinions that are probing for weaknesses in every argument you submit,” he said. “Our family stuck together and pretty much went from home to church to school. A lot of music, a lot of good food, a lot of cooking, that type of stuff.”

While his parents didn’t insist on straight A's for their children, Jordan said his parents knew their children were smart and wanted them to do their best. He played trumpet and even made first chair while pursuing a degree in music at Pierce College. Jordan completed his associate’s in 2005 and spent the next eight years working nights and raising a family.

Jordan started work on his bachelor’s at UW Tacoma in 2012. It was here that he began putting together the pieces of his life to create what is now his consulting and photography businesses. “The classes I took at UW Tacoma highly influenced my involvement, understanding and perspective on life,” he said. “Especially going through the economics class. It gave me a different outlook ... on systems and the things that impact life for people like myself in the areas of diversity, equity, inclusion and access.”

Jordan said that, for the first time, he was learning about free-market ideas and their impact on society, but also how they were only part of the story. “When you do the research and look at policies and programs and different things that were completed in the past, there’s heavy assistance for specific groups,” he said.

The knowledge of forces outside of markets and systems impacted what Jordan studied. “I learned later in life that I really enjoy learning — and so all of the courses at UW were just like new tunnels of understanding to find,” he said. “I would say that going through the PPE program gave me the ability to look at micro and macro issues and see the connections and the context of them.” Jordan’s consulting company is called “Clarity,” because, he said, that’s what discovering these connections and contexts provides.

Jordan is part of a group in Puyallup called Two-Way Racial Healing. Each month, they hold what are called “Tough Talks,” a session discussing biases in systems and individuals that can be invisible without real focus. “Only people affected by it can really see it,” Jordan said. It’s part of what drives him. “I’m focusing on two things, one is supporting Black excellence and the other is supporting the solidarity dividend,” he said. The latter is a term developed by Heather McGhee in her book, “The Sum of Us”, and is simply what happens, she writes, when people come together across race.

Jordan recently compiled a report based on sessions he held with Pierce County business owners called the BIPOC Business Executive Roundtable. “We got different BIPOC business owners and asked them questions about the things that are most challenging for them,” he said. “We saw that the least involved or incorporated group within business in Pierce County is the Indigenous population. The next up is the Black population, then Hispanic, then Asian-American, Pacific Islander group is next — and then white people are at the top. So what I saw was that there is a need for some of the stuff I’ve learned through studying at UW Tacoma.”

Jordan sees his work as helping to bring diverse groups of people together around a common cause. “There’s the solidarity dividend, which is helping people that are working across the anti-racist spectrum and moving their company toward better or more productive policy development,” he said. This is part of McGhee’s book that Jordan applies to his research. “When people work together, the outcomes are better than when one group is leaving another out,” he said. “There’s more creativity, there’s more trust.”

For Jordan the education he received at UW Tacoma formed a synergy he came to see as crucial to understanding others and providing leadership in businesses where it is needed. “It’s not magic,” he said. “It’s just, find a need, find a solution and connect those things, then see how different populations are affected.”