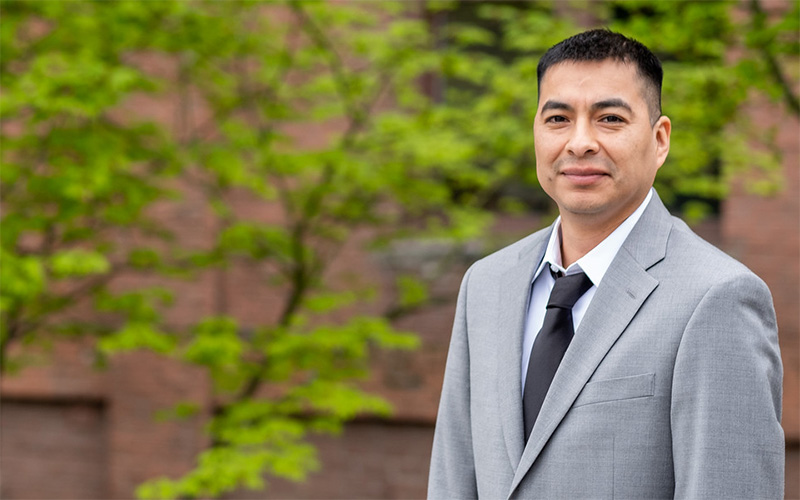 From Dream to Reality

Ivan Lievanos is using his experience in the National Guard to help veteran-connected students succeed in college.

Ivan Lievanos came to the United States at the age of five. Lievanos remembers feeling isolated. He didn’t speak English, and none of his teachers spoke Spanish. He recalls being in a hot, stuffy classroom and befriending another Hispanic kid. His new friend would translate as much of the teacher’s lectures as he could. “The language barrier is something that affects me even today,” said Lievanos.

Lievanos’ family were agricultural workers who spent hours on the job, often going late into the night and waking before the sun came up. “Growing up I wanted to repay my family and give back to this country,” he said. “I was thankful that I got an opportunity at the American dream.”

Lievanos joined the National Guard. In 2006 he was deployed to Iraq. “Even though I was young, in my twenties, I was probably one of the oldest people there,” Lievanos recalls. This age gap helped Lievanos grow into his role as a mentor for other military members. “It was definitely an experience to be an example for them,” he said. “Train them up while I was still learning from my mentors and leaders. I was kind of in the in-between role.”

Lievanos left the military in 2015. Soon after he enrolled at Bakersfield College in California. “It was a bit shocking, going back to school, but at the same time very rewarding because I found out that I was very focused,” said Lievanos. There, he got involved with a nonprofit that served veterans. “I learned a lot about what resources are available to veterans and myself, which led me into looking for other jobs and volunteer opportunities like that.”

Lievanos attended Bakersfield College for two years and received his associates in architectural drafting. Lievanos developed an interest in urban design while at Bakersfield and this interest ultimately lead him to UW Tacoma and a major in urban design.

Lievanos connected with the current director of the Veterans & Military Resource Center, Juanita Murillo Garcia. Her kindness and willingness to help during the process of selecting schools ultimately convicted Lievanos to come to campus.  “UW Tacoma was definitely a different environment, but one that made it so easy to adjust here,” said Lievanos.

Lievanos quickly settled into life at UW Tacoma. He works as the Veterans Corps Navigator. Lievanos’ main job is to act as a mentor for any student that is veteran-connected. The Navigator works with the Washington Department of Veterans Affairs in order to make sure that veterans attending the university have access to all the resources available to them.

Lievanos is a first-generation college student who is actively involved with the veteran community on campus. He has had a role in a variety of events and activities as part of the UW Tacoma Student Veteran Organization (SVO), including Lumineering, which commemorates fallen soldiers by creating outdoor campus displays of luminaria. He plans to graduate next spring. “My family is getting excited as time for graduation gets closer,” he said. “It's also important for myself that my daughters see, and know, that dreams can be achievable, and you should always take a chance on your dreams,” Lievanos explains.

Working with veterans is something Lievanos will continue to do in the future. “Many of them don’t know what educational benefits they have,” he said. “I remember what it was like starting out in college and I want to help veterans make as smooth a transition as possible.”

UW Tacoma alumna Joy Chang served as a medic in the army, an emergency room nurse at Tacoma General and now works as a nurse practitioner in a private practice.

The Best She Can Be

Alumna Chelsi Johnson took the strategic communications skills she learned at UW Tacoma to the D.C. National Guard and the Department of Defense.