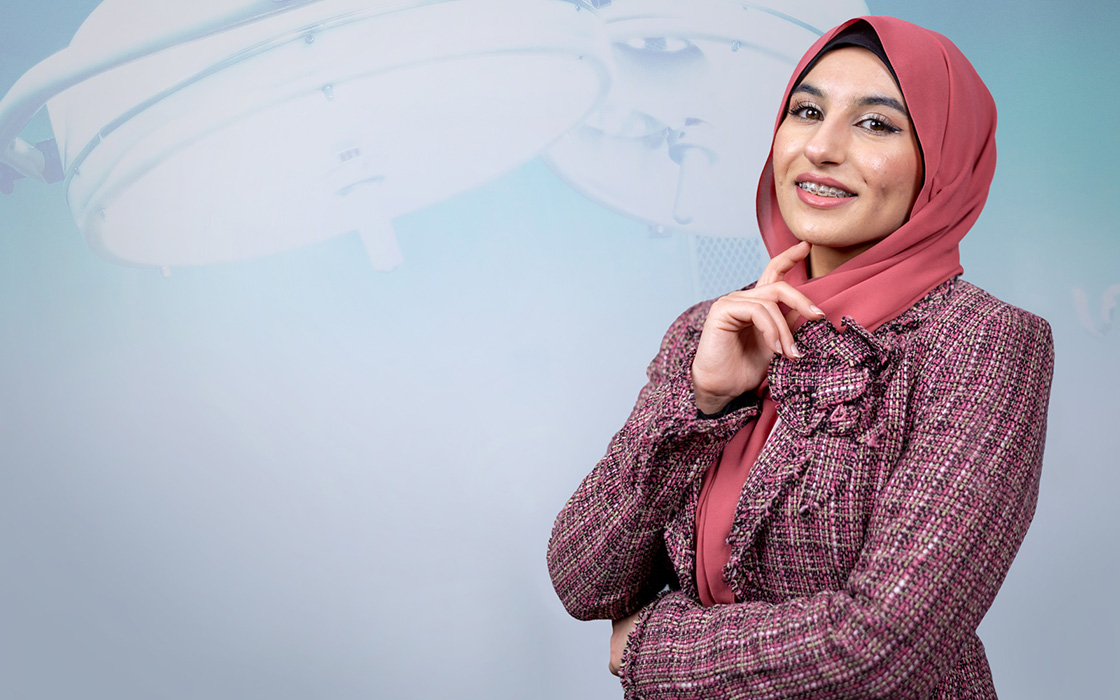 UW Tacoma senior Maryam Al Darraji's dream to become a surgeon took her from Iraq to Jordan to Kent to UW Tacoma.

“I witnessed people killed right in front of me. Slaughtered in the most inhuman way," said UW Tacoma senior Maryam Al Darraji. She grew up in Iraq during the height of the war that started in 2003 and ended eight years later in 2011.

For Al Darraji, determination and goals sprang from that hard time. Her uncle, to whom she was very close, died in her arms when she was just a young child. He suffered from a heart defect and because the family did not have enough money to send him to a better hospital for the proper surgery, he didn’t make it. “That made me so mad," she said. "I was in second grade in Iraq. I had no power. I made a promise then; I had that dream that I would become a heart surgeon.”

Her family, under constant threat from the unrest in Iraq, fled to Jordan where they lived as refugees for eight years. “We had to move around a lot in Jordan because we really weren’t accepted there,” she said. “I wasn’t welcomed in the classroom. Often, classmates and teachers would question my loyalty to Islam and my own identity.” Al Darraji said her two older brothers, Ameer and Aqeel, were also harshly treated, sometimes more aggressively like when other students would steal their lunch and throw it in the trash can. “It was only our last three years there when we felt that we were living in peace,” she said.

As she grew into her teenage years, Al Darraji was also battling a cultural norm that women did not really go into the medical sciences in the Middle East, or were discouraged from doing so. In tenth grade, while still in Jordan, she had to choose what educational path she wanted to take. “My parents wanted me to go into information technology, and my father wanted me to check that box,” she said. “But I wanted to choose science.” So, when her father wasn’t looking, she simply re-ordered her choices and put science as number one, and IT as number two. But by then, after eight years in Jordan, the Jordanian government gave Al-Darraji’s family the choice to stay in Jordan permanently, or to seek residence elsewhere. “We all talked about it and at first, my brothers were against moving away, but we eventually all decided to move to the U.S.," she said.

It was here in Washington, at Kent-Meridian High School with counselor James Frame, that Al Darraji first saw the range of opportunities available. The moment still resonates with her. “My dad was translating for me; I didn’t speak English well yet,” she said. “He (Frame) was the first one who saw that in me, he imagined me as a doctor. This was it. I was going to start. He was the one who said, ‘You can do this; we will support you.' ”

Al Darraji learned English while in high school. She also enrolled in a flight training program (her father was a pilot in Iraq) through Green River College. “I had no life other than classes,” she said. When she wasn’t in school, she helped out at home, cooking and cleaning and preparing food for her two older brothers and her parents.

Upon graduation, Al Darraji didn’t want to stray too far from home. She applied to UW campuses in Seattle, Bothell and Tacoma. “The first letter I got was from Seattle and I was rejected,” Al-Darraji said. “I was so upset. I thought I’d lost all my dreams, it was a ‘Here we go again’ moment.”

The second letter came from UW Bothell, where she was accepted. “But Bothell is pretty far from Kent, and I did not have a car. We all used one car," she said. Her parents would not let her live in a dorm, but they offered to move to Bothell to support Maryam’s college dreams. “It was very expensive to move there,” she said. “So I kept hoping that I’d hear from Tacoma.”

When the letter of acceptance came, Al Darraji said she was elated. “All my dreams seemed within reach.”

Commuting and spending most every day from morning until night on the UW Tacoma campus, Al Darraji says the school is a second home to her. “The goal is I want to be a cardio surgeon or a neurosurgeon,” she said. Al Darraji  graduates in June with a degree in biomedical sciences, and next fall she plans to take the Medical College Admission Test.

Al Darraji attends classes in the morning and then reports to work at the Teaching and Learning Center, and, on occasion, also teaches Arabic to English speaking students, then more class, studying and then home where she does more work. Her success has even rubbed off on her family. With Al Darraji's support learning English and studying, her mother went to school and has one quarter left at Highline Community College in Des Moines, where she will obtain an associate’s degree in early childhood education. “I had that dream inside of myself when I was in Jordan and no one supported me,” Al Darraji said. “I felt that if I supported my family, they would succeed too.” She even helped her brothers study at times.

During her time at UW Tacoma, Al Darraji had the opportunity to shadow a heart surgeon at Mary Bridge Children's Hospital and Seattle Children’s Hospital. The experience cemented her goals. She was observing surgery on an infant and at the end of the procedure, a needle went missing. The doctor was nearly certain the needle might still be in the patient and he would have to re-open the incision. “I couldn’t stand there doing nothing,” she said. “I searched around the room very carefully trying to find and allow the child to have a faster recovery by minimizing complications.” Al Darraji found the needle. “I realized how fortunate I was to witness this operation and be part of such an incredible human experience,” she said.

Now on the road to her future, Al Darraji said she knows the value of her education. Often she ponders what life could have been. She wonders what would happen if she had never gotten into UW Tacoma. “What would life have looked like?” she said. “I’m not saying going to Tacoma was easy — it wasn’t.” Al Darraji’s schedule indeed proved too much at one point — taking care of her family, going to classes, preparing for midterms — and she wound up failing two classes. “What it taught me was that there are moments in my life I will fail,” she said. “But the only thing that matters is I will get up. I can prove myself. I can do this and graduate from here.”