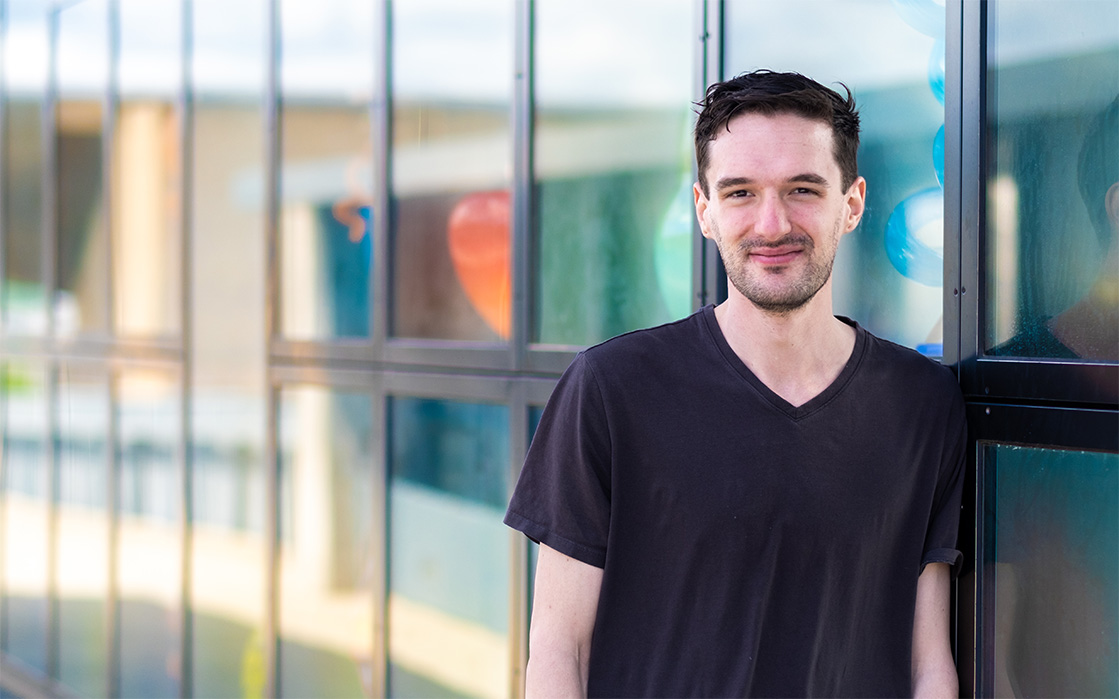 With his background in math and his degree in computer science, Dustin Ray hopes to harness artificial intelligence for social good.

Dustin Ray speaks eloquently about a subject that a lot of people find somewhat overwhelming. “We can do really beautiful things with math that will benefit humans and society, when you take that and marry it to artificial intelligence that respects the privacy of people who are involved in its use,” he said.

That respect of people’s privacy, the ability to electronically share information without fear it will fall into the wrong hands, is what he focused on when he began the coursework for a computer science major. Ray, whose specialty is cryptography, is one of this year’s student speakers at the 2022 UW Tacoma Commencement.

While he’ll certainly touch on his love of math, cryptography and artificial intelligence in his speech, he’ll spend a bit more time talking about how his college education helped him get to a point where he can help build the tools that will do these things.

“I was so bad at math,” said Ray. “It wasn’t until I came to UW Tacoma that I got teachers good enough to help me understand that I can do these things.”

Ray said Dwayne Chambers, associate director of the Teaching & Learning Center’s Quantitative Center, was his first introduction to college level math, and helped him understand what he was capable of, especially in mathematics. “It’s a difficult, very complicated topic that I never thought I was good enough to be able to understand or work with,” said Ray.

Education was not a straight line for Ray, who said high school never really appealed to him. While still at Curtis High School in University Place, he enrolled in the Running Start program at Tacoma Community College. “I finished that program at age 22, but then I took some time to do some traveling and see the world a little bit,” he said.

Ray went to South Africa and Zimbabwe and did independent humanitarian work around women’s health issues. “Women’s hygiene was a big issue there, and we were working on ways to bring the tools into the country to make the products that would be needed to help people,” he said.

COVID-19 threw a wrench into those plans, but Ray said he’d like to go back and finish the work. “I saw how other people could be happy with a lot less,” he said. “That was inspiring to me, and watching people work so hard made me realize I should go and learn more and be more effective in helping people.”

Ray returned home and started going to UW Tacoma. He realized he had more to give. “Most of my education was not applied, it was more theoretical,” said Ray. “It was giving me the foundations to do things that are applied, but in the last two quarters, things got really practical.”

Ray worked with Associate Professor Anderson Nascimento who invited him to do cryptography and machine learning work. “The privacy-preserving machine learning research group has people from all over the world engaged in cutting-edge research,” Ray said.

Nascimento connected him with a student in Brazil and together, and through an exchange of culture and knowledge, the pair worked on a machine learning algorithm that would learn to diagnose COVID-19 by examining chest X-rays at an Italian hospital. “I watched as the team leveraged very powerful tools towards a meaningful problem space, and I was hooked,” Ray said.

The experiences he’s had at UW Tacoma have allowed Ray to follow a passion he never thought he’d have. “UW Tacoma has a lot of people who are good at getting you to do things you didn’t think were possible,” he said.

Despite earlier challenges, Ray is graduating with confidence in his abilities, knowing there is a world that needs his new talents and skills. “If you’re telling yourself that you can’t do something, you probably won’t,” he said. “It’s good to be able to accomplish something and realize you can do it.” It’s part of what he’ll focus on for his Commencement address.

“I don’t think it would be appropriate to ignore the dire situation we’re in at the moment,” Ray said. “It’s important to acknowledge how difficult things have been, and how much we’ve had to go through during these two years.”

“But I also want to focus on this particular generation and how we’re maybe the best equipped generation to face some of the problems that we’re facing. We have access to technology we’ve never seen before, and information we’ve never used before. I think it’s important to be realistic, but I think there’s a lot to be optimistic about.”

That combination of realism and optimism has given Ray a “big-picture” view of what’s happening in technology today. “Technology is so crucially integrated into our society now, that there’s a huge need for people who can work and understand these systems,” Ray said.

“My fear is that these things are advancing past the point of a single person being able to look at them and see what’s going on. So, the more people that can go and understand these things and work with them, the better off we’ll be.”

Ray’s experience at UW Tacoma has prepared him for what’s ahead. “Through work with the right faculty, I ended up being able to do some really cool stuff. Believe in yourself,” he said. “You can do it.”