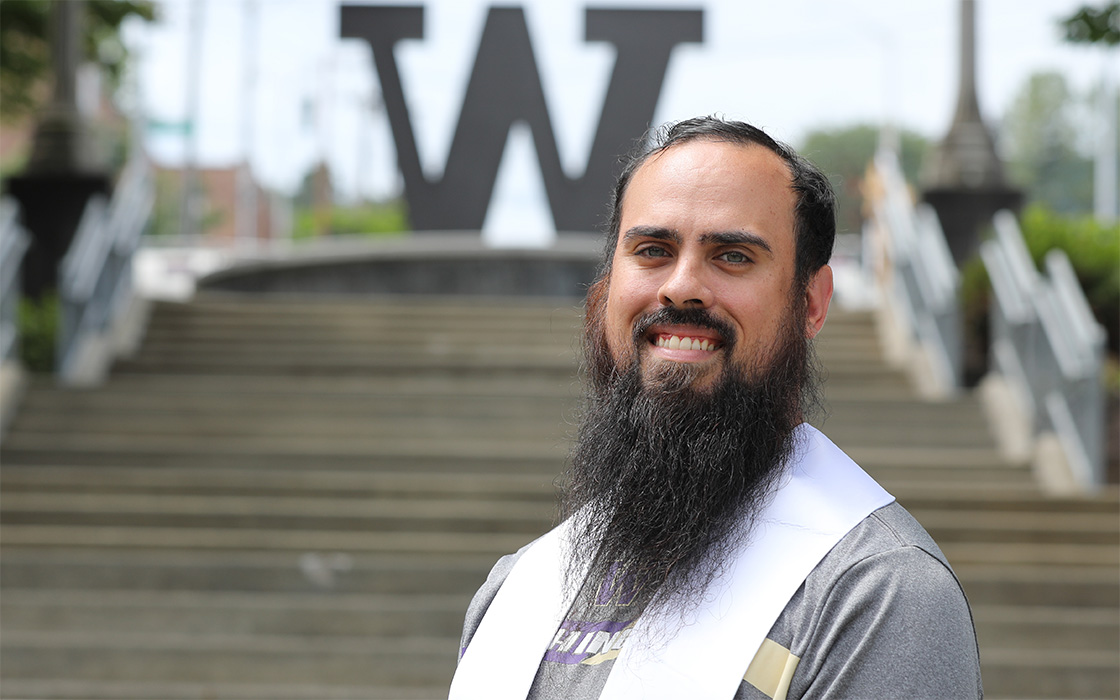 Eric Colon has climbed out of more than a few wrecks in his life -- figuratively and literally. It’s a skill he had to develop when circumstances conspired to knock him down. But with appropriate help, a commitment to healing and compassion, as well as to his own ability to change, that skill helped him complete a bachelor’s degree at UW Tacoma.

Growing up in New Jersey, Colon joined the Army in 2013 intent on serving for 20 years. “I was planning to go as long as I could,” he said. “I knew what I wanted.” He was sent west to Joint Base Lewis McChord (JBLM), where he was for three years before shipping out to Europe. “I was a mechanic, a vehicle recovery operator,” said Colon. “If a vehicle broke down, I had to go get it.”

While the job was not inherently dangerous, accidents did occur and Colon was the victim of two of them, a vehicle rollover and a brake failure. “I had to jump out of the brake failure and that led to me injuring my shoulder,” he said.

Surgery and rehabilitation at Landstuhl, Germany were not successful and Colon was shipped back to JBLM in 2018 where he was to be medically discharged from the military. “I wanted to be a mechanic all my life, it was my passion,” Colon said. His injury left him with numbness and tingling in his hand, which made working as a mechanic difficult. “I was working at Korum Ford in Puyallup, but I’d fallen on some hard times and I was living out of my car for about a week,” he said. Working as a mechanic, however, aggravated his injuries, and he had to walk away from the job.

Right around that time, he met the woman who is now his wife, Davina. She too had been in the military. “We met online and had our first date at Tacoma Mall,” said Colon. “She found out about my living situation and she offered her home to me.”

The couple married on New Year’s Eve, 2019, and it was Davina who talked him into using his G.I. Bill benefits and going back to school to get an education. There were few other options for Colon, so he enrolled at Tacoma Community College where he excelled in his classes and earned a 3.8 GPA.

Colon transferred to UW Tacoma and began classes last spring. “I took four classes per quarter and was doing pretty well,” he said. “I knew I had to keep busy, it wasn’t healthy for me to have too much time on my hands,” he said.

The couple have a son, and each has a daughter from previous marriages. Davina got pregnant with another child in 2021 as COVID-19 was still limiting access to the hospital, and she experienced a miscarriage.

“It was a tough process to go through,” Colon said. “My wife was at the hospital by herself, and I was with our other kids. I wasn’t allowed to be there with her.” The experience took a toll on Colon. “I felt like I wasn’t being supportive of her and I was really struggling,” he said.

It was just the beginning of more hard times for Colon. In the midst of the couples’ grief, Colon lost a friend and fellow veteran to suicide. “I was struggling with my own mental health,” he said. “It was like starting all over again. I’d been through so much and I had to pick up the pieces.”

However, his experience at UW Tacoma provided him with support and compassion. “I was grateful for my professors. They weren’t just my professors, they were people and they were understanding of my circumstances, gave me the time that I needed to take care of myself and my family and that was important to me.” Colon noted Tanya Velasquez, Alex Miller, DeAnn Dillon and Charles Williams as examples of professors who offered him support.

Colon also got help from the VA hospital at American Lake. “Their job is to help veterans get on their feet and get their lives back on track,” he said. The assistance he received got him thinking about providing that same help to others -- a chance to give back.

“While I was still at TCC, I was looking into becoming a social worker and I went and spoke to one at the VA,” said Colon. “I felt like that was my calling. I wanted to help people get through their tough times and when I got accepted to UW Tacoma, I majored in the Ethnic, Gender & Labor Studies program. There was no sociology major, but this program opens up the playing field to everything and anything, and walks the same path for the most part.”

Colon said he feels that he’s in a better place now and he changed course again, away from social work. Six months ago, he decided he wanted to teach children. “I just completely switched everything up,” Colon said. He started working in April as a teaching fellow at Impact Public Schools in Tacoma. “I’ve only been there for about a month and a half, and I’ve had parents come up to me and tell me they’re thankful I’m there,” he said. “That feels really good.”

His desire to share the story of his experiences -- changing directions in his education and career-path, his struggles with mental health -- led him to audition to be a student speaker at the 2022 UW Tacoma Commencement. He lost out on that opportunity, but five minutes after that e-mail arrived, a second email arrived from UW in Seattle where he’d applied for a master’s degree program in teaching elementary-aged children.

“At first I was bummed out that I didn’t get the speaker position, but then I got accepted to the master’s program and all that sadness went away,” Colon said.

Colon still goes to the VA’s behavioral health program every month. “I feel like there’s such a stigma around mental health unfortunately, and there really shouldn’t be. It’s okay to get help.”