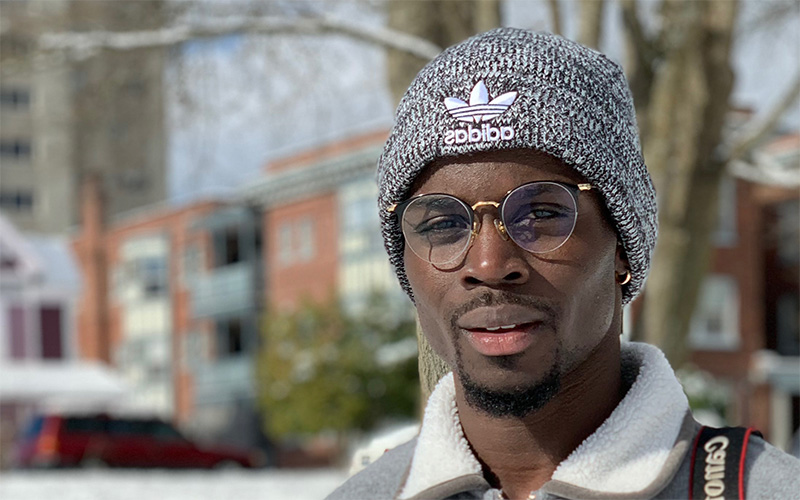 Fieldwork for the Non-traditional Student

By the time he came to UW Tacoma to study urban design, Dennis Adjetey had a set of experiences that gave him the drive and the desire to do well.

There’s this idea floating around, one that seems to be especially prevalent among “non-traditional” students. The term “non-traditional” is complex and includes different criteria, but perhaps the most common definition is someone who didn’t go to college immediately after high school. I don’t often introduce myself into a story. However, I’ve been writing stories about students for more than five years and a common refrain I hear from “non-traditional” students is that they spent the years after high school and before college doing nothing or even wasting time.

I’m an outsider when it comes to the lives of the people I interview. This perspective yields insight. Those years between high school and college aren’t wasted or spent in the pursuit of nothing. Indeed, as I’ve learned over the years, these students-in-the-making are engaged in a form of fieldwork. They’re out in the world. They’re learning and struggling, succeeding and experiencing. They’re engaged in the everyday test of living. The perceived failures and very real triumphs embedded in these weeks, months and years are an education, inspiration and often a motivation for the “non-traditional.” Maybe they don’t know it, but they’re choosing a major before they’ve ever signed up for a class.

Take, for example, Dennis Nii-Nnamshie Adjetey. Adjetey is a “non-traditional” student. After high school Adjetey spent two years working as a valet. The tips he earned went into a special jar. “I’d always wanted to live in London,” he said.  “Just imagine being 19 and getting to live in the city of your dreams — that’s what I did.”

Adjetey lived with family in London. At one point he enrolled at the University of Greenwich. “I went to some classes, but that wasn’t why I was there,” he said. “All I wanted to do was experience the city, and I definitely did that.”

The young Adjetey remained in “The Old Smoke” until the money he’d so diligently saved ran out. “I came back and didn’t really know what I was going to do next,” he said. “I ended up at Arizona State University for a little while but I went there for the wrong reasons, not to go to school, but just to make friends and socialize, which I was able to do, but that doesn’t get you very far.”

Adjetey returned to Tacoma where, in his own words, he “didn’t do anything, just worked.” Adjetey loves cities, his passion for urban life is what lead him to London. He considered a career in architecture but the fit wasn’t quite right.

Some people are microwaves: they make decisions and act on them quickly. Others are crockpots: they take a little longer but there’s always a low heat about them. At some point in his mid-twenties Adjetey decided he was ready for school. He enrolled at Tacoma Community College (TCC) with the goal of finding a career that fit his burgeoning interest in cities. “I realized if I wanted the things that I told myself I wanted, the minimum I needed to do was get my bachelor’s degree,” he said.

As so happens in life, Adjetey had a seemingly random conversation with a friend that changed the trajectory of his life. This friend told Adjetey about a yet-to-launch urban design degree in the Urban Studies program (now School of Urban Studies) at UW Tacoma. “I did some reading and it was exactly what I was looking for,” said Adjetey.

To say Adjetey succeeded at UW Tacoma is an understatement. He reached for the stars then rocketed past them on his way to Pluto. During his time on campus Adjetey was name a Dressel Scholar. He also served as Urban Studies Senator for ASUWT as well as the ASUWT Director of University Affairs. Adjetey spent this past year as president of the Urban Affairs Honors Society.

This is a lot, but Adjetey still had more in the tank. He worked for two years at the UW Tacoma Library as a circulation assistant. He also took a position at Metro Parks Tacoma as an environmental educator. “I would teach local elementary, middle and high school students about how cities and humans affect watersheds,” he said.

Adjetey’s drive paid off. He landed three different internships, first with the Tacoma Housing Authority then with McGranahan Architects and finally HTNB. The latter is an infrastructure and urban design company. “My long-term goal is using my urban design skills to design solutions to problems that involve communities and have a social aspect or element to them,” said Adjetey.

Adjetey had the energy and the talent. All he needed was a little time. “If I’d gone from high school to an urban design program, I wouldn’t have done nearly as well as I’ve done because the experiences that I’ve had gave me drive and the desire to do well,” he said.

It helps that Adjetey has an understanding family. Adjetey’s father moved from Ghana to Washington state to take a position with the Port of Tacoma. “My dad did all this stuff to get here by himself and to get us to America,” he said. “My parents worked really hard and all they wanted me to do was get a four-year degree and I’m happy I could do that for them.”

Most of Adjetey’s extended family lives in Ghana. Adjetey is a first-generation student and, come Saturday, June 11, he’ll be the second person in his family to earn a college degree (his sister graduated from WSU). “My grandmother is super jazzed,” said Adjetey. “Only a few people in my family got to come to America and take advantage of the opportunities here, so I think this means a lot to them to see me graduate.”