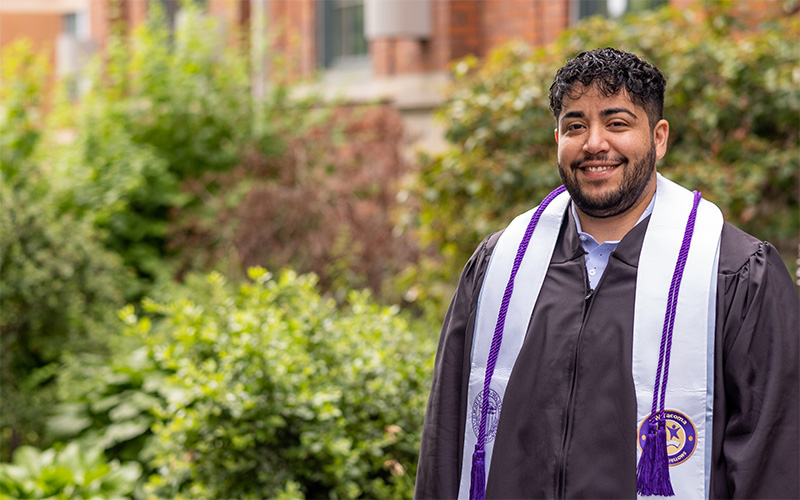 Finding His Place in the World

Felix Aráoz-Copley says, even after many trials and tribulations, he would not change a thing about his experience as a first-generation, immigrant, Latinx, queer student at UW Tacoma.

Felix Aráoz-Copley’s academic career began at Bellevue College, soon after he moved to the U.S. from Latin America. “Before coming to the States I lived a very middle-class type of life,” he said, “I helped my brother’s family by taking care of the kids, and went to law school for one whole year.” Aráoz-Copley felt listless and unfulfilled at home: “I wanted to leave, I wanted to find my place in the world.” He moved to the U.S. and enrolled in Bellevue College’s Business Transfer Program on the advice of a mentor from back home. While he did well enough to pass classes, he was miserable. “Nothing was clicking,” he said, “I never felt happy and the idea of going to business school two more years was daunting.”

Aráoz-Copley chose UW Tacoma because the campus offered smaller class sizes and a more intimate setting. “I wanted the possibility to get to know my professors and for my professors to get to know me,” he said. When he arrived at UW Tacoma and saw the other programs the school offers, he found himself further questioning his choice in major.

“I had to make a decision: apply to business school and be miserable two more years, or change my major to something I felt truly passionate about. The answer was clear. If I was going to pay all that money for a degree, I was going to do it for one that made me happy. Law, policy, and social sciences were my true passion, especially when it comes to immigration. After considering UW Tacoma’s Law & Policy and Politics, Philosophy, & Economics majors, I decided on the latter because it aligned better with my international politics/relations interest.”

Aráoz-Copley’s experiences in school were strongly influenced by his first-generation status and his age. He began college at 29 and felt insecure and embarrassed about his age. But now, at 33, his perspective has shifted. “It has been a long, challenging road, but I wouldn’t change a thing. Every step I took in this direction, every class, every paper I wrote has led me here,” he said. “Being a first gen student isn’t easy, there is a lot of ‘extra learning’ that you need to do on your own, which can sometimes make you feel alone. It is okay to make mistakes, to fall flat on your face, to start over. I did and I am still here, about to graduate. So don’t give up, keep showing up and doing the work. It’s worth it.”

Aráoz-Copley says that the pandemic made his experience at school easier, but it came at a cost. “I really like taking online classes because it allows me to set my own schedule,” he said. “I am super self-motivated, which helps, so ‘doing the work’ without my professors checking in on me was really nice. The biggest downside, I would say, is that I feel like my senior year experience was lost.”

Even after the many trials and tribulations of college life as a first generation, immigrant, Latinx, queer student, Aráoz-Copley says he wouldn’t change a thing. “I met and married the love of my life, graduated college, and found my place in the world.”

After graduation, Aráoz-Copley plans to take a break for a while. After five years of college, he’s ready for a breather. “I want to sleep in, work on my health, and spend time with my husband and puppy.” In terms of career, Aráoz-Copley is keeping his options open, but is considering foreign policy or something that will allow him to help fellow first gen students navigate higher education.