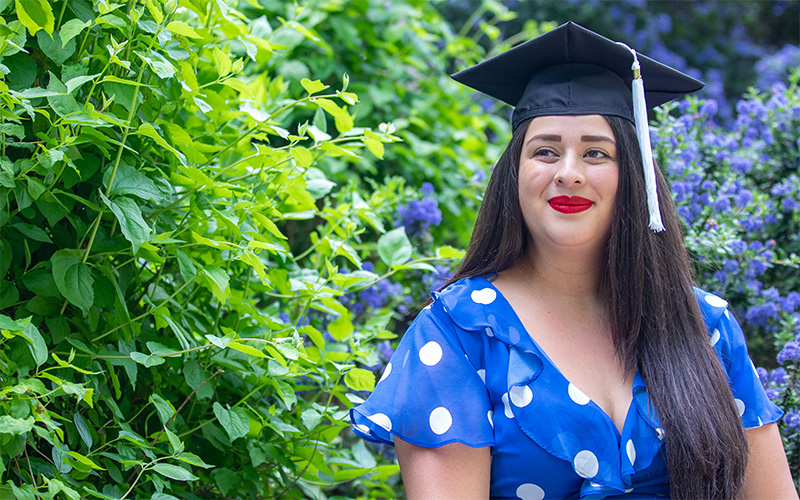 This year’s Commencement student speaker, Davina Pasillas wants to encourage people to use their voices. She wants to inspire her siblings and her kids to shoot for the stars.

Davina Pasillas just needed time. The UW Tacoma senior graduates in June with a degree in Ethnic, Gender, and Labor Studies (EGL). The Rio Alto, Calif., native attempted community college straight out of high school. She enrolled in a few courses but worried about the long-term cost of going to school.

Pasillas decided to take a break from higher education. She joined the U.S. Army and spent four years in the service. Pasillas served in South Korea before finishing out her military career at Joint Base Lewis-McChord. “I really enjoyed being in the Army,” she said. “There’s also a social structure in the military where you need an education to advance.”

Pasillas says the experience of taking orders and living a scheduled life taught her something important. “I knew I wanted to go back to school with the hope of eventually becoming my own boss,” she said.

Pasillas enrolled at Tacoma Community College where she completed her associate’s before transferring to UW Tacoma. An interest in organized labor lead Pasillas to major in EGL. “I’m Mexican-American and I want to help Hispanic people with labor labs and protecting their rights,” she said.

While at UW Tacoma, Pasillas worked for the Center for Student Involvement. She also got involved with Legal Pathways. When she wasn’t working or studying, Pasillas was busy being a parent. She has two children, a four-year-old girl and a four-week-old boy.

A first-generation student, Pasillas’ reasons for attending college are multifold and deeply personal. Her parents didn’t have the opportunity to pursue their education past high school. Pasillas is the second of four siblings. “I wanted to set an example for my siblings and for my kids,” she said. “I want them to shoot for the stars.”

The Class of 2021 is the second class to graduate during the COVID-19 pandemic. This era is a confluence of intersecting threads from the public health emergency to cultural flashpoints around social justice and contested elections. It can be hard to focus on coursework when so much is going on in the word. Pasillas wants to talk about these past 15 months and what they meant to her and to the Class of 2021. She’ll get the chance. Pasillas is the student speaker at this year’s UW Tacoma Commencement. “I want people to use their voice,” she said. “We can be, and we have to be, the difference in our communities.”

Following graduation Pasillas hopes to intern at a local law firm. After that she’s considering getting a master’s degree or maybe a juris doctorate. “I’m going to go for it,” she said. “Who knows, I might decide to get a Ph.D.”