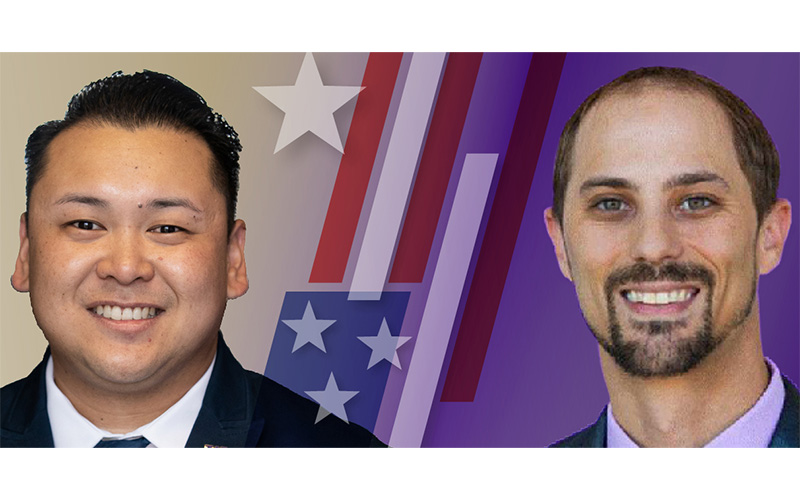 Recent grads Thomas Di Giorgio and Jeffrey Bantay developed a friendship while students at Tacoma Community College that carried them through UW Tacoma.

The space wasn’t much — a couple of metal chairs with hard plastic backs, a nicked-up table and a communal microwave with the detritus of meals past crusted on the interior. This meager setup fit into an area not much larger than a traditional office break room.

Members of Tacoma Community College’s (TCC) student veteran organization met here (Di Giorgio, Bantay and others later secured funding to upgrade the space). They came to talk, work on homework or eat, sometimes all three. The room didn’t have much, but it did have a door, and most importantly, it had other student veterans.

Thomas Di Giorgio and Jeffrey Bantay met for the first time in this space. Di Giorgio worked to get a student veteran organization started at TCC. A friend, and fellow veteran, told Bantay about the club and encouraged him to attend a meeting. “We [Bantay and Di Giorgio] met and it lit the fire,” said Bantay. “Everything kicked off from there, and we’ve been friends ever since.”

Di Giorgio and Bantay would often hang out in that “hole in the wall.” They’d chat while something like a pizza pocket did laps in the microwave, the meat and cheese inside warming slowly. The pair had a lot in common. They’d both been to war as part of the army and they both struggled to transition to civilian life after the military.

Military service is a tradition in Bantay’s family. His father spent 20 years in the Army and both of his grandfathers served as Filipino scouts for the U.S. military in their native Philippines. “I had that lineage and that pride to serve my country,” he said. “I remember it was December of my senior year in high school and I went down to the Tacoma Mall recruiting office. I graduated the following June, then left for basic training.”

Di Giorgio enlisted, in part, because he needed to make a change. “I joined the military because I wanted to be something better than what I was,” he said. Di Giorgio’s mother raised him and his three siblings. She bartended and sold used cars to keep the family afloat. As a teenager, Di Giorgio dropped out of high school and started stealing car stereos. “I thought reselling them [car stereos] to friends to get my own was the way to go,” he said. “First time I did it, I actually got caught.”

Di Giorgio spent six years in the army. Bantay served 15 years before being medically retired. Life in the military provided both men with structure and a sense of purpose, something each struggled to find in the weeks and months after they left the military.

Di Giorgio had been out of the service for a few years when he got in a physical altercation and was incarcerated for 18 months. Upon release he found himself with little money and no opportunities. He lived in his car for a time. Bantay remembers feeling both anxious and depressed. “I got to the point where personal hygiene wasn’t in play anymore,” he said.” At family gatherings, Bantay would retreat to a quiet corner to be alone. Both men thought of committing suicide.

The little space at TCC, the one with the uncomfortable metal chairs and tired microwave, seems an unlikely spot for a friendship to form, let alone thrive. The office may have been small, but there was plenty of room for Di Giorgio and Bantay’s separate histories. The duo often talked about their lives and how they wanted to help other student veterans.

Bantay originally planned to get his associate’s degree then enter the workforce, but Di Giorgio convinced him to come to UW Tacoma. The two threw themselves into improving the student veteran experience at UW Tacoma. Di Giorgio and Bantay both served as president of the Student Veteran Organization (SVO) and helped raise the chapter’s national status. In each of the past three years the UW Tacoma SVO has been named a finalist for Chapter of the Year by the Student Veterans of America. The group does a bit of everything from helping with landscaping at UW Tacoma’s Giving Garden to hosting an event for Gold Star families to providing clothes to student veterans to wear during job interviews.

The SVO meets inside the Veteran and Military Resource Center, a large window-laden space on the third floor of the Tioga Library Building. There’s a microwave and plenty of chairs but there’s also something else. “The VMRC is that hub, it isn’t one of those offices where you go in and get the information and you get out,” said Bantay. “It ended up being that one-stop shop, but it was more of a family mindset.”

Di Giorgio is quick to point out that a lot of people, including UW Tacoma Registrar Andrea Coker-Anderson and former Associate Director of Veteran and Military Resources Rosalyn Johnson, worked to create a welcoming atmosphere inside the VMRC. “The support systems [for veterans] the university has in place is something every university should model,” he said. “The University of Washington Tacoma is definitely the standard right now in the state.”

Bantay and Di Giorgio have to find somewhere new to meet. Bantay completed his degree in Ethnic, Gender, and Labor Studies in December. Di Giorgio participated in this year’s virtual Commencement but has one last class to finish this summer to finish his communications degree. The two are parents — Di Giorgio has two kids, Bantay has three. The pair have a knack for turning random spaces into homes. As they make this next transition, it seems likely that their next meeting space will be one of their homes with a meal straight from the oven and served at a table big enough for all.

There's more to Di Giorgio and Bantay's story. You can hear the rest by listening to the most recent episode of the UW Tacoma podcast Paw'd Defiance.