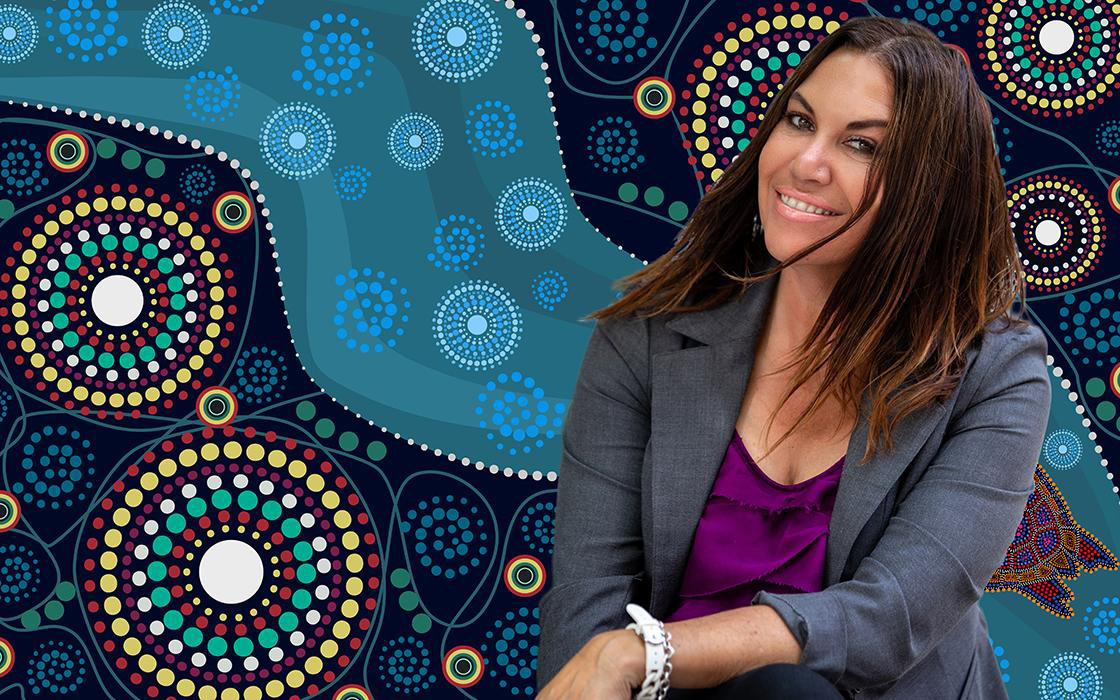 Seven-year-old Isabella Webb stood at the bus stop on a particularly rainy day. She recalls the rain with distinctness, as it seldom rains in Australia. As drops splashed down on her skin, Webb declared to herself: “I’m gonna go to University and I’m gonna travel the world.”

Growing up, Webb’s five older siblings described her as the “boldest” of the bunch. Even with her lively personality, she kept her Aboriginal identity safely hidden away. “I grew up with the stigma of the stolen generation and the impacts that had on my parents, family and culture,” said Webb. “That fear was instilled in me during my childhood, as it was with many multigenerational Indigenous families.”

As a child, Webb watched the Australian horizon with glistening eyes. Her heart pounded and swelled with a burning desire — the curiosity of what could be on the other side. At the age of seventeen, she jumped on a plane headed to the United States with the intent of starting college and finding out just what waited on the other side of that horizon.

Webb used her opportunities. She attended college in North Carolina. After graduation, Webb went to Florida where she worked for the Education Channel, a provider of professional learning content serving teachers and administrators.

Webb, left that job to work for EF Educational Tours. She led American students on tours across Europe. “Sometimes leading tours in Europe, there are certain places — depending on the country — where you can't lead a tour, but you're still expected to know everything,” Webb recalls, “So whether it's Pompeii, whether it's Notre Dame, whether you are on a bus heading from Italy to Paris, and someone says, 'What's that aqueduct? Why is it there? Tell me something about the aqueduct.' I'm obsessed with weird amounts of knowledge about strange things, but I think I'm really well suited to that because I have a lot of energy, a ton of energy. And my goal is, whatever you're doing should be fun.”

Webb returned to the U.S. and took a position at Tacoma Community College (TCC) as an international program coordinator. This role allowed her to explore “culture, identity, and America,” with fun activities such as hiking Mount Rainier, shopping, attending baseball games, and more. Connecting with international students on a daily basis also included being their mentor, their guide, their support, and educational liaison. “So essentially I get a budget, I get the names and profiles of my students, and then there's also a lot of expectation management because you have the institutions overseas who have their goals," she said. "You have the community college, who have their goals financially, and then you have the students who have their goals. I always like to think that, first and foremost, I'm always the advocate for my students.”

When it comes to goals, Webb has had many opportunities to work on her own over time. One of those goals was to obtain her master’s degree in education. “I feel like education should be about passion, and I think that education is a transformative experience.”

Education can be a transformative experience but that doesn’t mean Webb lost sight of her identity. While writing her master’s thesis, Webb felt the overwhelming sensation of imposter syndrome for the first time in her life. This weighed on her, causing her to doubt herself, her work, and her identity, often leaving her wondering if she’s “Aboriginal enough to tell the story?”

It wasn’t until later in life when Webb started encountering people who identified as “other” that she “started to feel empowered, strong, beautiful, and confident.” She turned a perceived negative into a positive and utilized her Aboriginal background as well as her feelings of imposter syndrome as the compass heading for her master’s thesis. Her goal was, and is, to shine a light on storytelling and how it pertains to students of color and Indigenous students. “The topic was actually how storytelling develops identities in higher education,” she said. This comes about because I am half Aboriginal. Being a half-Aboriginal girl from Australia, I don't think anyone thinks that you're going to grow up, get your master's degree, travel the world and teach in a university. I find with Aboriginals, you just have less of those scholars, less of those people who speak up in the community.”

For the past three years, Webb has worked as a senior academic advisor and affiliate faculty housed in Academic Advising at UW Tacoma. “I love it,” she gushes. “I think when you're a generalist, you know everyone and you know everything. It's fast paced and it's moving and I get to do a lot of life exploration, degree exploration.”

Webb is a firm believer in empowering students. "The whole student is important and it is significant that they feel they’ve been able to tell their story and bring their authenticity and their culture to campus,” she said. “The big thing for me is that they can connect to their cultural and academic identity, that they should never be two separate things.”

Here at UW Tacoma, Webb leads the Husky Success Series (HSS), an innovative and collaborative partnership between students, academic departments, clubs and organizations. HSS connects students with tools, events and experiences needed to have a holistic and successful experience at UW Tacoma. With her international background and career experiences from TCC, Webb was able to expand the series to be student-driven and create fun programming that is also educational. Students involved in the Husky Success Series have done poetry slams, open mics and activities that open and expand their self-awareness.

Outside of the office, Webb is working on her doctorate. For her dissertation, Webb is driven to write something that is personal and reflects what she has done in education. Webb had the opportunity to talk with Australian researcher Dr. Jacqueline D'warte at a conference. D'warte encouraged Webb to reach for the stars and to fully embrace her Aboriginal identity.

"She asked me, 'How many Aboriginal women are getting their master’s, have traveled and are teaching at university? None, really. There’s maybe a handful of women. That puts you in this 1%. You really owe it to tell your story so that other Aboriginal people have these stories, they have your path and can see a way forward,’” said Webb.

That speech emboldened Webb to pursue her doctorate in education. Over time, Webb has become more comfortable in her Aboriginal identity and it has become a central part of how she approaches her work and career. “The field of education is probably a good way to go,” she said. “I think that I would maybe consider some kind of ethnic studies, but eventually I just really want to be able to teach on Oceana, Pacifica, Indigenous storytelling and identity work.”

This is also a part of why Webb holds UW Tacoma dear to her heart. UW Tacoma is a diverse campus whose students approach education in various ways. “I have to be able to understand their lived experiences so they can be successful,” she said. “That the responsibility of an educator.”

Personal exploration is a big part of the university studies course course Webb teaches (T UNIV 250, "Husky Success Quest"). "Students really appreciate studying themselves,” she said. “When you think about it, people study everything under the sun, but this also allows them to understand themselves and their process and who they are and what their story is — and you need that to be successful.”