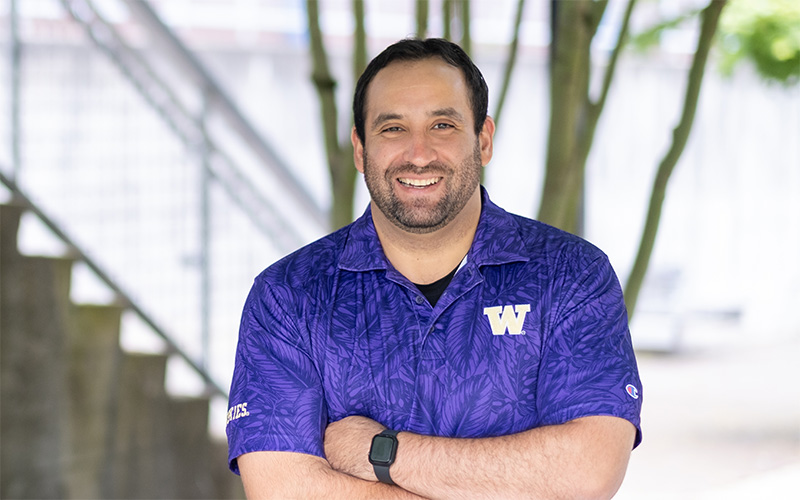 A Higher Level of Healthcare

Michael Villalpando, a paramedic by training, has earned a degree in healthcare leadership as a stepping-stone to becoming a physician assistant.

Michael Villalpando worked as a paramedic for 15 years but came to realize he wanted more education, greater responsibility and the ability to care for patients in a deeper, more lasting way than emergencies provide.

Now he’s on a path to becoming a physician assistant, one that includes earning a bachelor’s in healthcare leadership this June at UW Tacoma.

“I want to be able to be in just more than an emergency setting,” Villalpando said. “I just want to be able to continue taking care of people long term, getting to know them and doing more internal medicine. I know I can do this at a higher level.”

As a paramedic, Villalpando has the clinical hours required of physician assistants during training. What he didn’t have was the required bachelor’s degree.

“I had to start from scratch, and I went to Tacoma Community College and started from the very, very beginning. And told myself I wanted to go to a major university and ended up at UW Tacoma,” he said.

Villalpando chose his degree program because he thinks it pairs well with being a PA. “I figured healthcare leadership would be the best for later in life as a physician assistant, maybe co-managing some kind of community health center around Tacoma or something like that.”

Villalpando discovered healthcare in high school, through a program in his Northern California hometown that familiarized students with firefighting and EMS. On medical calls he enjoyed “doing something and not just assisting. I want to be the one in charge.” At 19, he went to paramedic school in Northern California.

He worked in the Denver area until 2016 and moved to Tacoma, where he’d met his future wife. They have a son and a daughter, both born during his college years. It wasn’t easy, earning a degree and building a family at the same time. “I remember being in physics class, and she would call and she’s like, ‘He’s screaming. I don’t know what to do.’ It was our first kid.”

Now his wife tells him: “We’ve raised two small kids in this whole time you’ve been in school full-time and working. This is a huge accomplishment.”

The son of immigrants, Villalpando and two older sisters are the first in their family to go to college. His father came to the U.S. from Mexico and went to work for the railroad, putting in a total 42 years with the Southern Pacific and the Union Pacific, first laying ties and pounding spikes by hand and later operating a labor-saving track machine.

His parents are coming for commencement and he’s planning to show them the Prairie Line that slices through campus. “I’m interested to see what he’s going to think of the tracks going through. Because every time we go through anything light rail, he’s always like, ‘Oh yeah, that’s a whatever millimeter track.’ “

Family both instigated and supported his college education, starting with his parents. “They’ve always been huge on, ‘Please finish your schooling. Get a higher education because we didn’t have that opportunity,’” he said.

His wife’s parents in Port Orchard often took their children so he could focus on classes. “Her parents have been so much help. I don’t know how we could’ve done it with them in the house all the time because it would have been just a disaster.”

Getting to this point wasn’t easy, but he’s been prepared for the next step, PA school, and hopes it comes at UW Tacoma. The campus hosts one of five locations for UW Medicine’s Medex Northwest PA training program.

“My first choice is hopefully to stay here,” he said. “I think Tacoma is where we want to be for the rest of our lives.