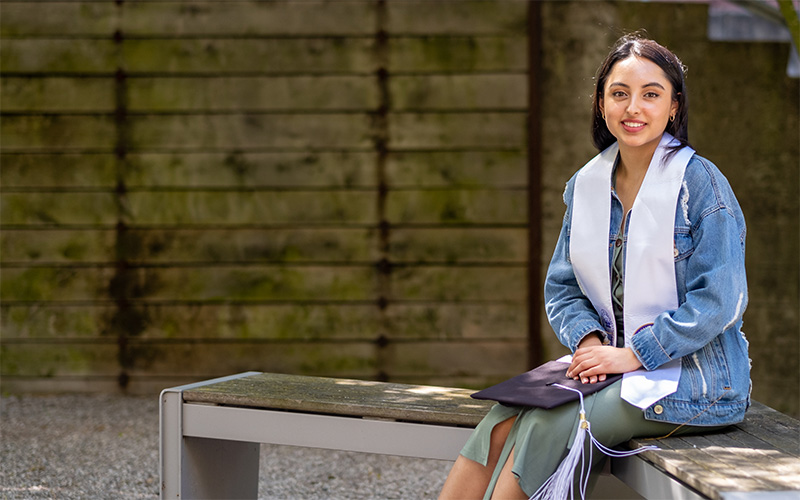 “I Can Do Something to Change That”

Growing up in Puyallup as part of the immigrant community and as the daughter of the owners of a popular restaurant, Margarita Gonzalez learned early that she could succeed with the help of those around her.

In some sense, Margarita Gonzalez grew up in her parent’s Puyallup restaurant. “Even before I would work, I would just go there,” she said. It’s easy to picture Gonzalez sitting in a booth finishing up some math homework, or later, in high school, wearing a uniform and handing customers their orders before asking them if they needed anything else.

Gonzalez’s parents came to the United States from Mexico in the 1990s. Their restaurant has been a Puyallup mainstay for more than twenty years. Gonzalez and her brother attended public schools in the city. A first-generation student, Gonzalez got some help from the AVID program when it came time to pick a college. “People in the program helped us choose our college and taught us how to apply for things like scholarships,” she said.

Gonzalez came to UW Tacoma in the fall of 2017. College can be overwhelming, especially for those who don’t have a network of people they can rely on for insights about how the process works. Gonzalez found support within the larger first-generation community on campus. She started attending events hosted by what is now First Generation Initiatives. “I started off just going to their events, and then I applied for a job, and then I started working in the office,” she said.

“The people around me — my friends, staff and faculty — have been a really big help and a great resource for me.”
— Margarita Gonzalez.

As Leadership Development Coordinator for First Generation Initiatives, Gonzalez assisted the cohort of First Gen Fellows as they navigated their way through higher education. During this past school year, Gonzalez also served as the Director of Outreach for ASUWT. “We were tasked with trying to get students more involved in campus life whether that was with a club or with different student organizations,” she said.

Gonzalez graduates with a degree in social welfare. Her choice of career reflects a desire to help others in her community. “Growing up in my community you see a lot of need around immigration and not knowing the culture,” she said. “I just felt like I could do something to change that.” For her practicum Gonzalez worked at Catherine Place, a women’s shelter in Tacoma.

After graduation, Gonzalez plans to spend the next few years working and gaining experience before pursuing a master of social work. “In the field of social welfare, reading about people is different from working with them,” she said. “It’s going to be an exciting time and I hope to learn a lot from it.”

Gonzalez’s family is planning a celebration to mark the occasion. “My dad wants to rent a limo,” she said. One of the stops on this ride will be to get a bite to eat but they won’t be dining at the family restaurant. “It’ll be someone else’s night to cook,” said Gonzalez.